The Department for the Investigation of Police, in the Ministry of Justice (DIP) has informed B'Tselem that it decided to initiate disciplinary proceedings for "unlawful use of force" against a border police officer who was filmed kicking a nine year old Palestinian boy. The DIP decided not to file a criminal indictment against the officer. B'Tselem has written to the DIP to obtain the full investigation file to determine whether further steps are warranted.

On 29 June 2012, a B’Tselem video volunteer outside the Tomb of the Patriarchs in Hebron documented an Israeli Border Police officer kicking a Palestinian schoolboy, ‘Abd a-Rahman Burqan, while another officer restrained the boy. The video clip was released by B’Tselem on 2 July 2012 and widely distributed in the media. Broadcasts of the clip brought about a wave of official responses and put the issue on the public agenda. Testimonies collected by B’Tselem reveal that this was the second time in less than a month that Border Police officers attacked the 9-year-old. B'Tselem has yet to receive an update regarding the second complaint.

After the video was publicized on 2 July 2012, the DIP notified B’Tselem that a criminal investigation had been opened and that the border police suspects would be summoned for interrogation immediately. That evening, the media also announced that the Border Police commander had ordered a special team be assembled to investigate the incident.

The next day, the DIP summoned ‘Abd a-Rahman Burqan to testify about the two incidents. Videographer Raed Abu a-Ramila was also summoned to give testimony. The testimonies were taken at the Hebron police station in Kiryat Arba and one of the police officers at the station served as translator. 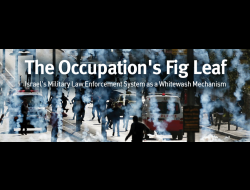