Testimony of Hiyam Sarhaneh, whose son Mus’ab was hit in the eye by a rubber-coated metal bullet on 27 Sept. 2013, when he was six, at al-Fawwar R.C. On 27 September 2013, my son Mu’sab was hit in the right eye by a rubber-coated metal bullet. He was six years old and he lost the eye. That day, we were walking over to his uncle’s house near the main entrance to the refugee camp. When we were near the entrance, we saw soldiers who had come into the camp and were deployed along the houses closest to the entrance. They were firing tear gas and rubber-coated metal bullets at children who were throwing stones at them and demonstrating there. The clash had begun before we got there.

We stopped by the side of the road and waited for the firing to stop and then tried to keep on walking along the edge of the road. I was holding Mus’ab’s hand and we were walking along when suddenly, one of the soldiers started firing rubber-coated metal bullets again. One of the bullets hit Mus’ab in the right eye and he started bleeding. At first I didn’t understand what had happened. It was a real fright to see my son bleeding from his eye and I started screaming in the middle of the street.

Mus’ab was quickly taken to the government hospital in Yatta, then to ‘Aliyah Government Hospital in Hebron, and from there to the ophthalmological hospital in a-Sheikh Jarrah in Jerusalem. He got there at night, after a complicated process of coordination with Israel. At first, my husband and relatives tried to shield me from the truth, but I pressed my husband until he told me that Mus’ab had completely lost his right eye. At first I just wouldn’t accept it. I couldn’t stop crying and felt guilty for taking him with me on the visit, on that day of all days. I was sorry the bullet hadn’t hit me instead. Everyone tried to calm me down and make things easy for me, but I couldn’t calm down. I couldn’t believe that my little boy would live the rest of his life with only one eye. I still don’t want to believe it. He was only six years old and had just begun school. He had no idea what was going at the entrance to the camp and why the soldiers were firing tear gas at children.

Mus’ab stayed at the eye hospital for two weeks, until the wound healed. He had to wait for an artificial eye implant. I stayed with him the whole time, crying and worrying that he couldn’t see me with his left eye.

Mus’ab underwent plastic surgery and a glass ball was inserted in his eye socket. Meanwhile, I neglected my other children. All I could think about was Mus’ab getting an eye implant and looking normal again, so we could forget for a moment that he’d lost an eye. A year later, he had his first artificial eye implant. It took a long time and cost us more than 10,000 shekels (approx. USD 2,600), because we didn’t want the cheaper eye that the Palestinian Authority provided for free. It’s not good quality, you have to take it out before you go to sleep, and you can’t shower or swim with it. We wanted a better quality eye and paid for one ourselves. It has to be replaced every two years because Mus’ab is still growing so it needs to be adjusted to his size. A year ago, he had a new eye implanted and we also paid for that one ourselves.

Mus’ab is in the fourth grade now and he’s doing well at school. His father and I, along with his brothers and sisters, do everything we can to make him feel that he’s like everyone else and not think that he’s limited in any way. We try to comply with every little request and make an effort to help him feel like a normal boy. I’m always sad but I try to look as natural as I can. I encourage him with schoolwork and ask what he wants to study after he graduates. He says he wants to be an ophthalmologist so he can help people who have lost their eyes. I don’t know whether that’s even possible, whether he can be a doctor with only one eye. A lot of professions require two eyes.

It makes me sad to see that Mus’ab understands exactly what happened to him, even though he was so young. I know he can’t see as well as others and that his poor sight puts him in danger, especially at night. In the past few weeks he stumbled and fell twice while he was outside in the dark. He broke his right arm and it’s in a cast. I try to keep him inside once it gets dark and to watch him all the time.

A few days ago, Mus’ab came home in tears. He told me that a neighbor’s kid called him “one-eye”. I completely lost it and went right over to the kid’s house. I warned them that this better not happen again. Such things can scar him emotionally.

Mus’ab gets psychological therapy through Doctors Without Borders. I think I may also need help to finally put this behind me and go back to being the way I was, like other mothers. My son was robbed of a happy childhood and I was robbed as a mother. I’m so sad for him and can’t get over my feelings of guilt and helplessness.

After Mus’ab was injured, we hired a lawyer to file a lawsuit and get compensation that will hopefully provide for his future. I hope the lawyer manages to get Mus’ab some compensation, even though I know that all the money in the world can’t make up for a lost eye.

Hiyam Muhammad Mahmoud Sarhaneh, 39, is a married mother of seven who lives in al-Fawwar Refugee Camp, Hebron District. Her testimony was given to B'Tselem field researcher Musa Abu Hashhash on 19 December 2016. 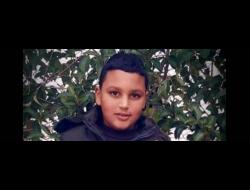