The convoy of bulldozers arrived at Khirbet Humsah with clear orders: demolish as much as possible.

It was 3 November 2020, the eve of the US elections. As the world looked to the west, Israel demolished 18 tents and shacks that were home to 11 families, nine tents that served as kitchens, three storage sheds, 10 portable toilets, solar panels, 23 water containers, 29 tents and shacks that served as livestock enclosures, 10 livestock pens, and feeding and watering troughs. More than 30 tons of fodder and water for the animals were thrown onto the cold ground. To round off the rampage, the forces confiscated vehicles and two tractors belonging to three residents.

Many Palestinian shepherding communities in the West Bank live on land that Israel seeks to take over. As the state cannot simply load the residents onto trucks and drive them away – an act the international community would frown upon – it has decided to make their lives so unbearable that they will leave, supposedly of their own accord. That is why Israel bans them from building anything at all – homes, livestock pens, roads. It is also why they are barred from hooking up to water and electricity grids, and why the authorities are quick to demolish whatever they eventually, for lack of choice, build without permits.

International organizations occasionally provide humanitarian aid. The West Bank Protection Consortium, for example, which consists of 10 EU member states, supplies the communities with essential equipment to alleviate the hardships created by Israel. The authorities are quick to demolish these structures, too.

That Tuesday, after the last bulldozer disappeared beyond the horizon, 74 people – 41 of them minors – were left homeless. Out in the open without shelter, toilets, electricity or hope. They stood there, in the cold rain of early November, on the bare sandy hills, and did not know what to do next. After all, their livelihoods depend on this place, and they have nowhere else to go. 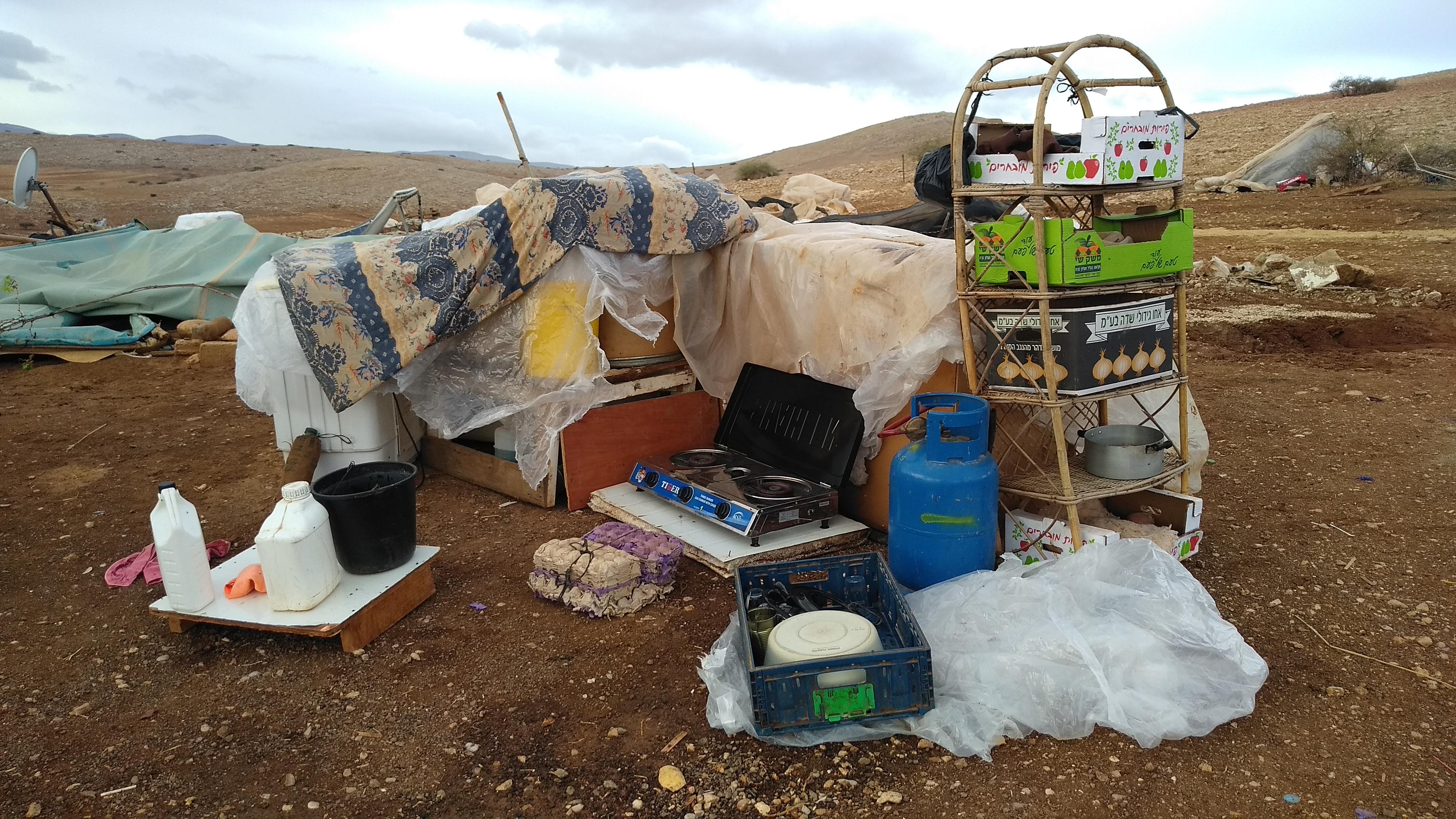 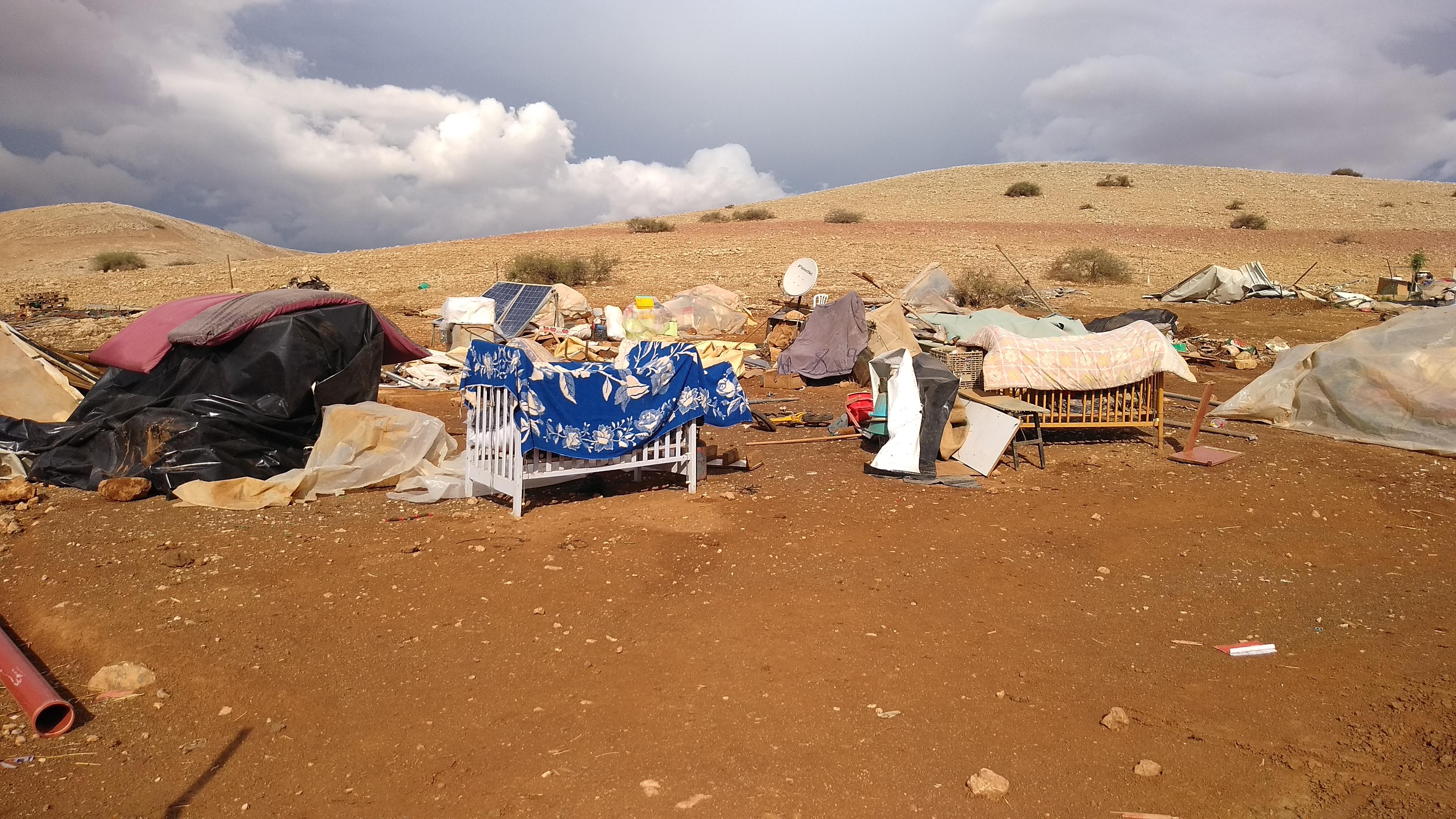 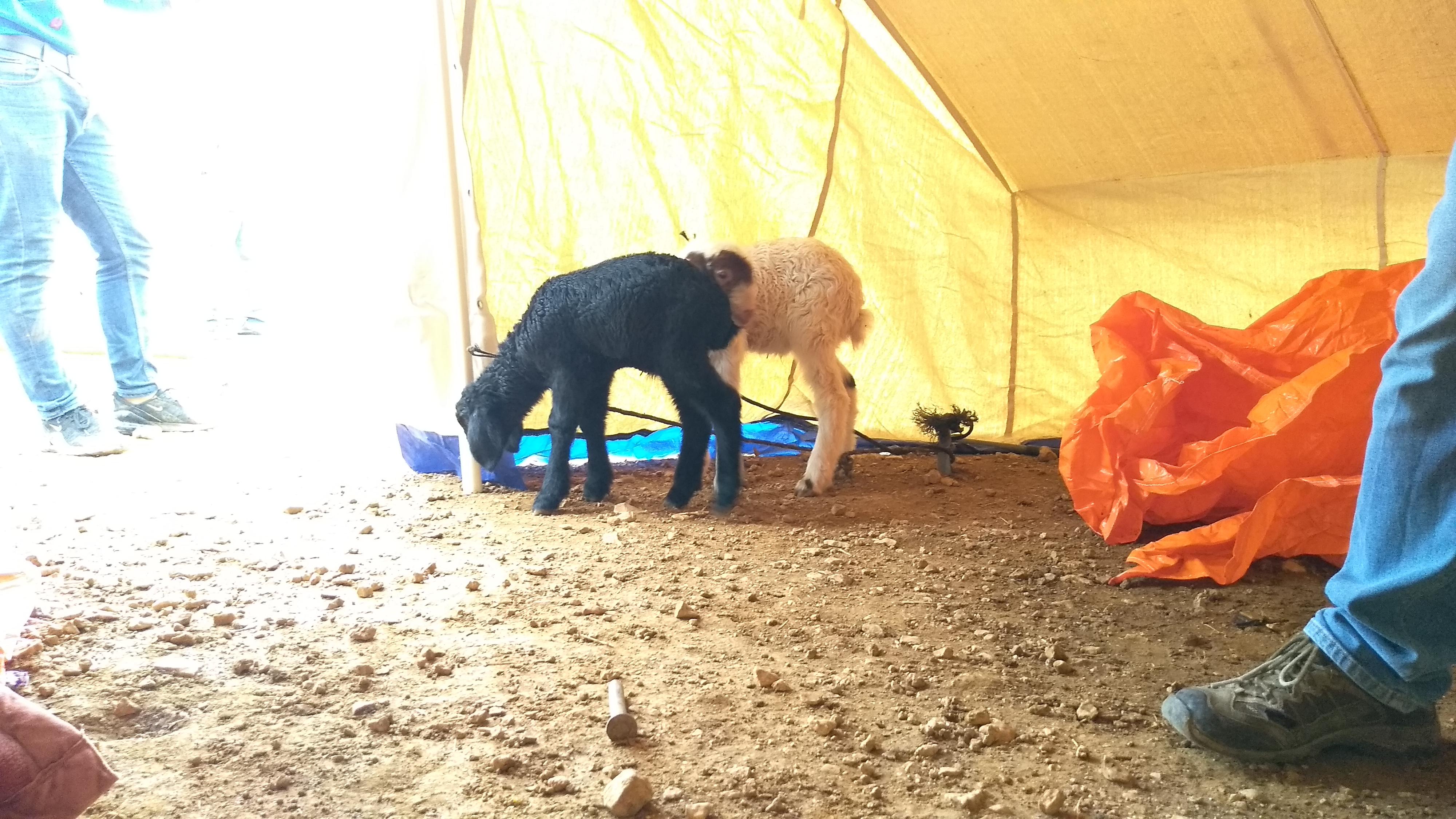 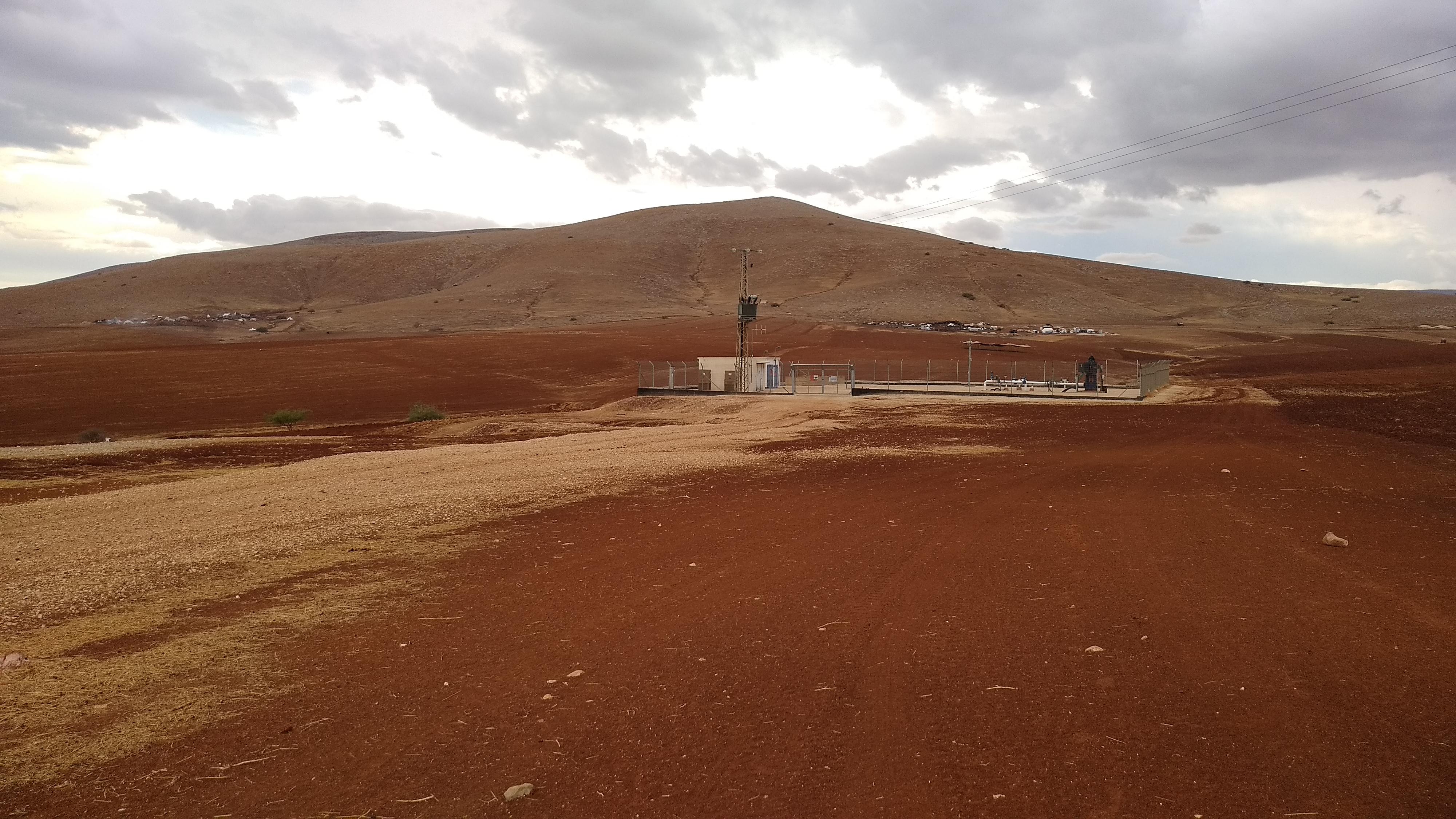 To the outside observer, this place may seem to be the middle of nowhere. A land with no people. Yet there are people there, and this is their home. The photo shows the pumping station of Israeli water company Mekorot, flanked by two of the four Khirbet Humsah tent compounds that were utterly demolished. They will never be able to enjoy the water. Their complete or partial destruction is only a matter of time. 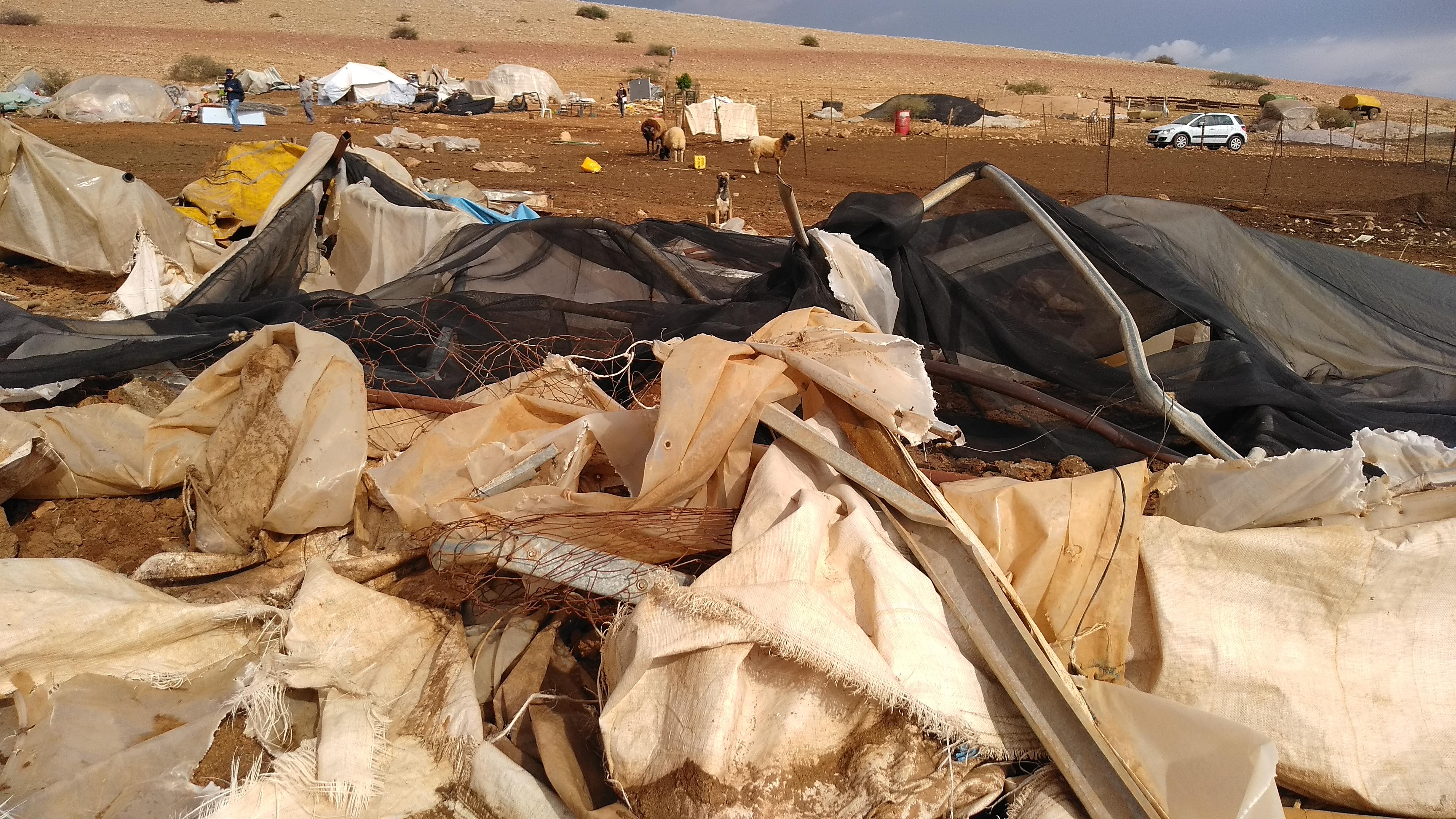 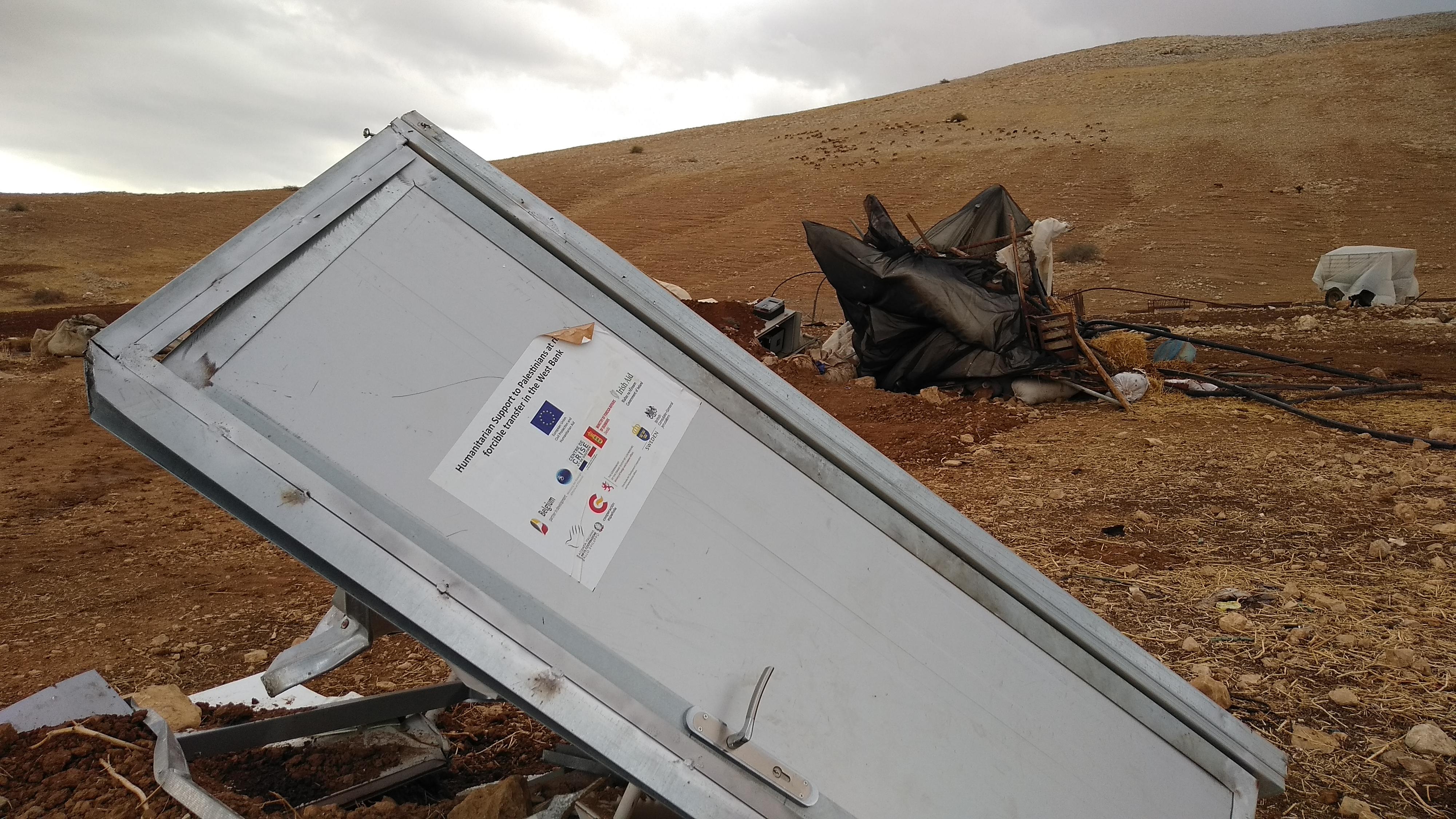 This used to be portable toilet, donated to the community by the West Bank Protection Consortium. 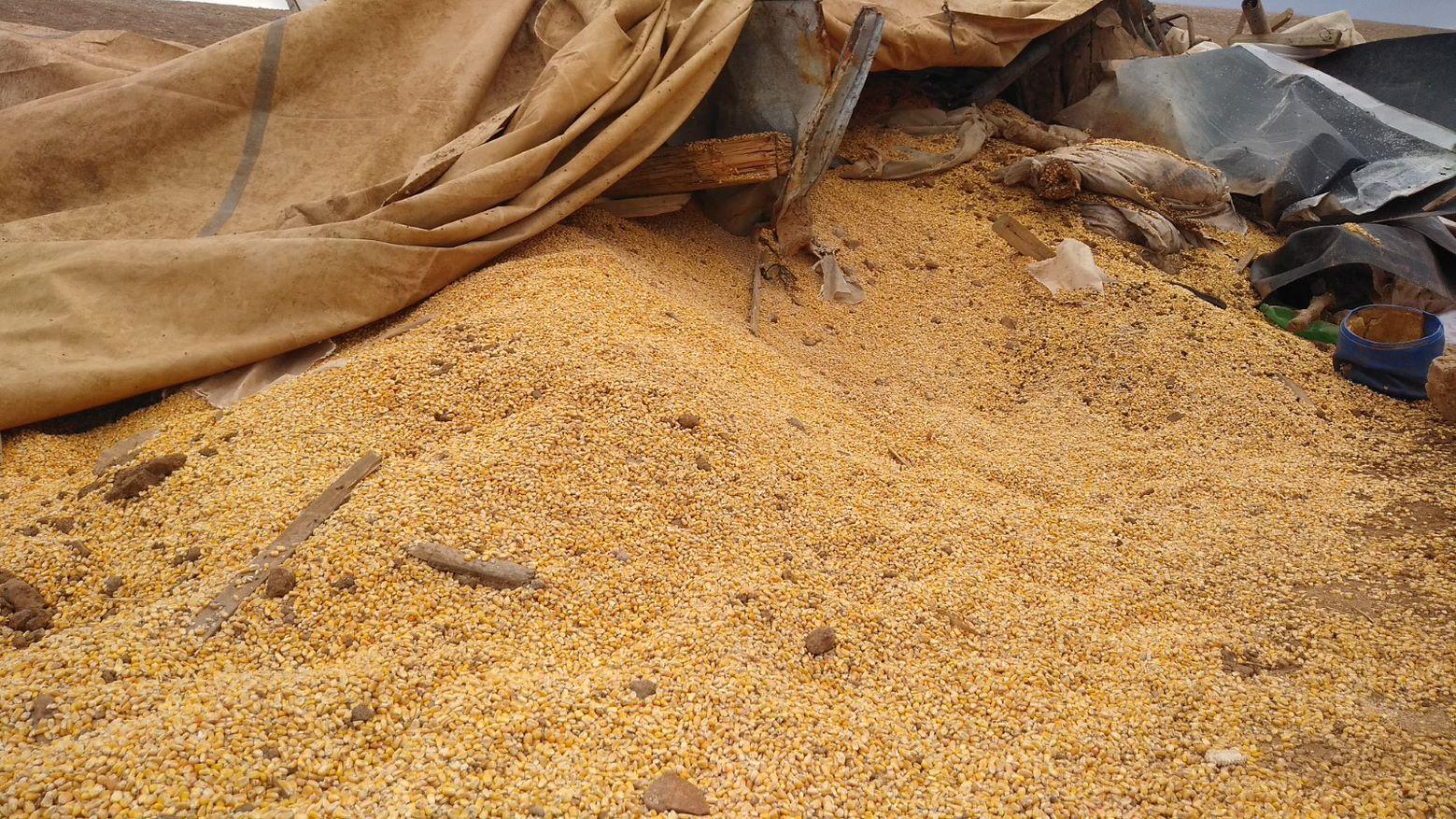 The remains of fodder residents bought for their livestock. The Civil Administration officials even destroyed that. 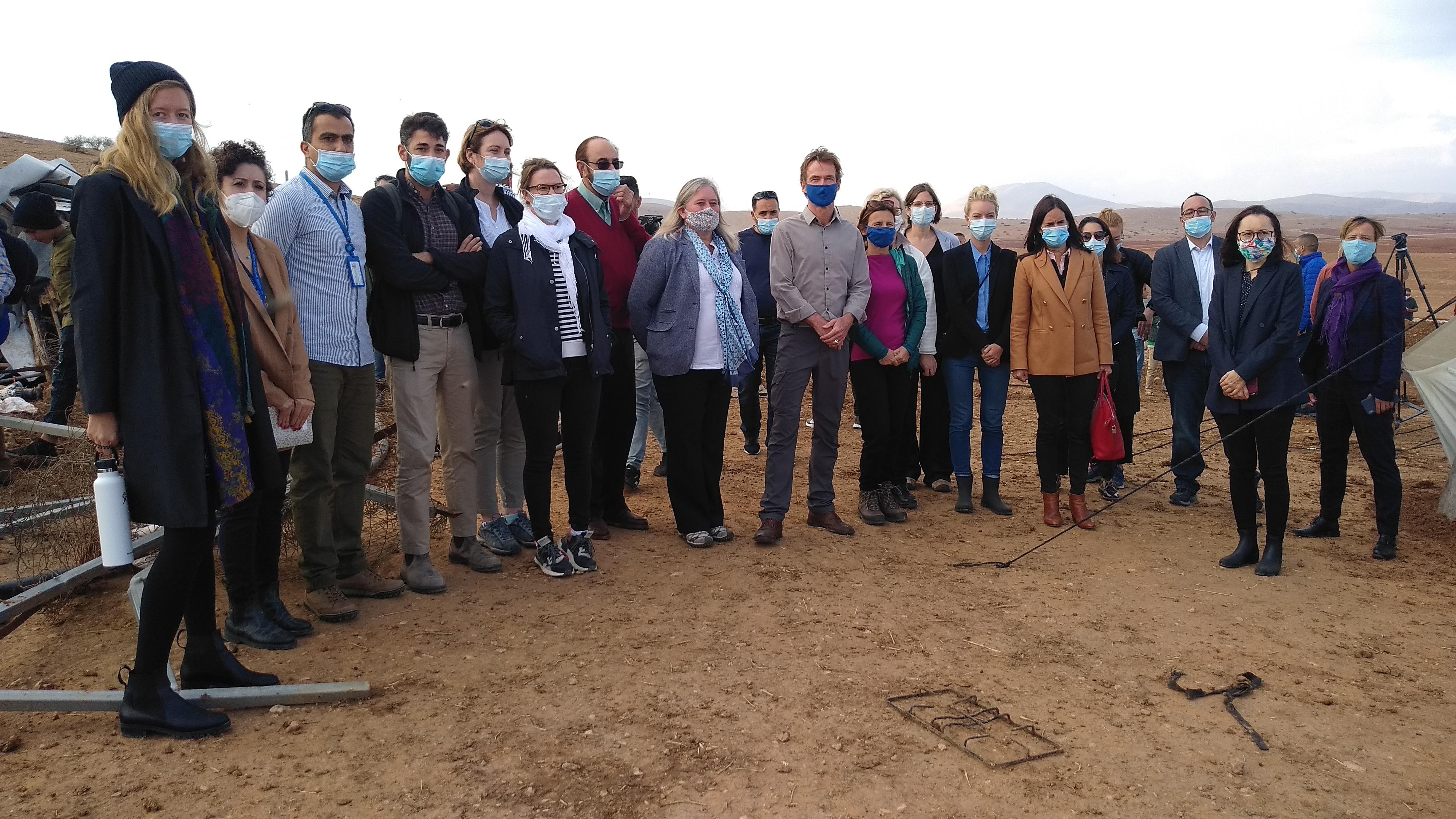 Israel hoped the world would look the other way when the bulldozers arrived, and that the demolition would go unnoticed. But a group of key diplomats from the UN, the EU and other countries came – and refused to look away. 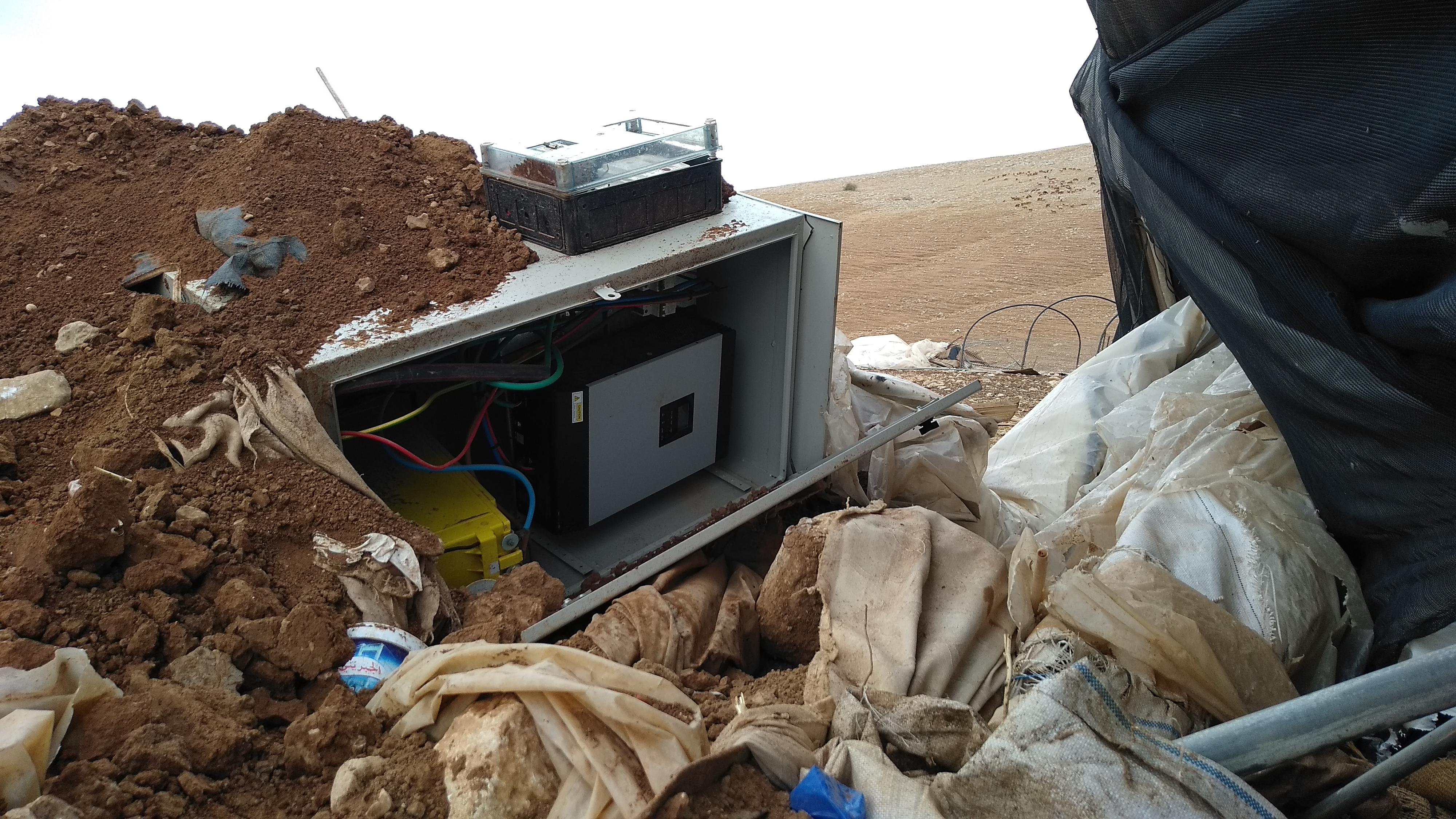 A fuse box that was part of the community’s solar power system. 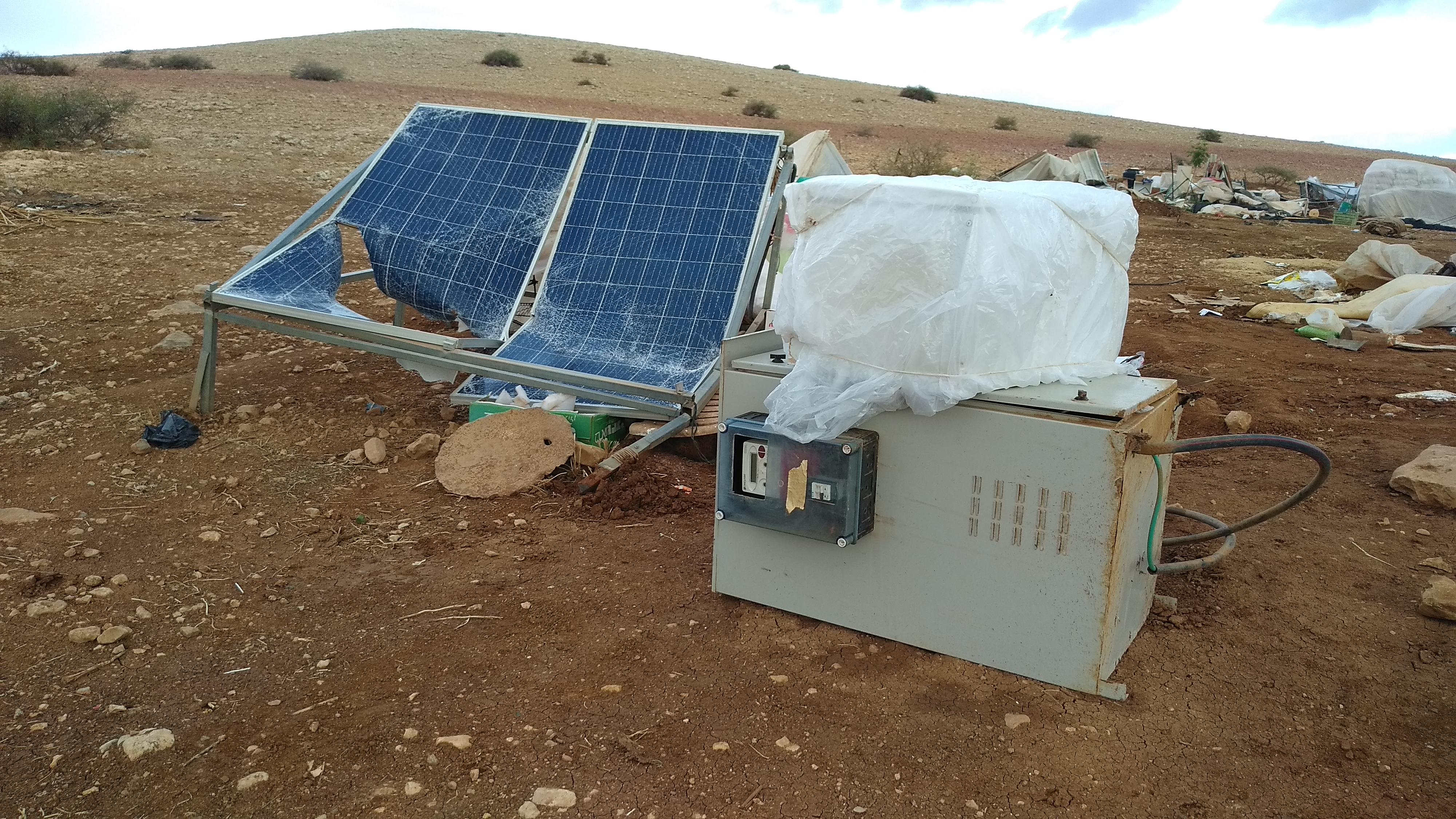