For hundreds of years, the Palestinian villages of ‘Azmut, Deir al-Hatab and Salem (Nablus District) were sustained by an economy based on farming and shepherding on al-Jabal al-Kbir (the Great Mountain; Har Kabir, in Hebrew) and its surrounding valleys, which lies east of the city of Nablus, and in the valleys around it. In 1980, the settlement of Elon Moreh was established on land owned by the villages. Ever since, the settlers and Israeli authorities have taken action to dispossess residents of the three villages of their lands, gradually transferring the land to Elon Moreh and other nearby settlement outposts. Separating the Palestinian residents from their lands has destroyed the economy of the villages and undermined the very fabric of traditional village life.

B’Tselem’s new report describes the mechanisms of dispossession used against these three villages, which have resulted in devastation to the traditional farming way of life. The same mechanisms and processes have been put into practice in hundreds of other villages across the West Bank. 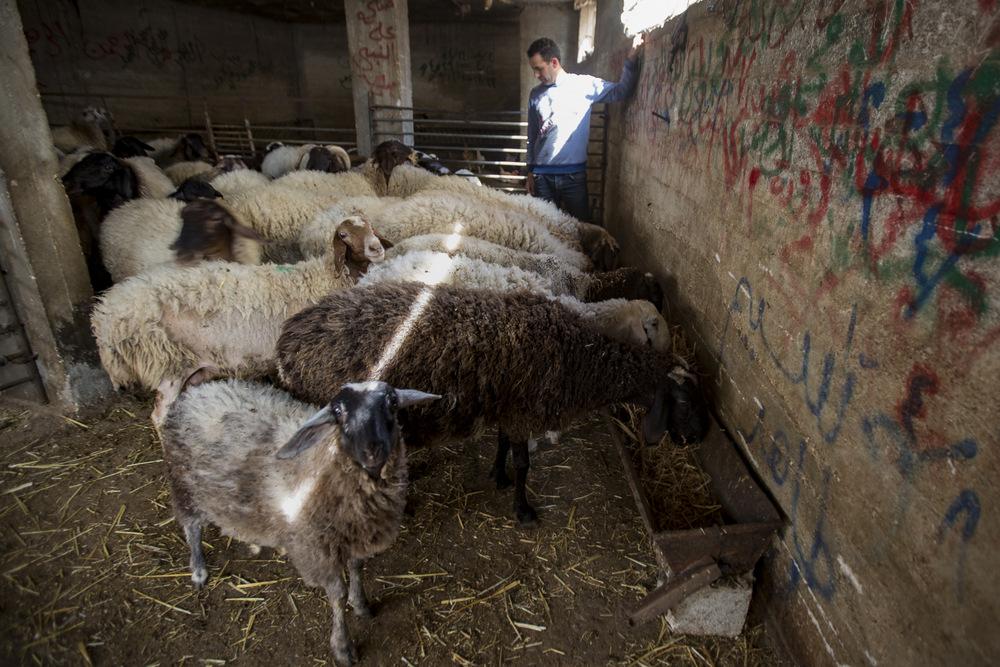 “At night, I often dream that I’m grazing my flock on our village land - the way things used to be, before the settlement was built. I hope I manage to get back to those lands one day, and dream of smelling the earth and sitting under the trees once again.” Hamed Ahmad ‘Othman Ahmad, 75, from Deir al-Hatab 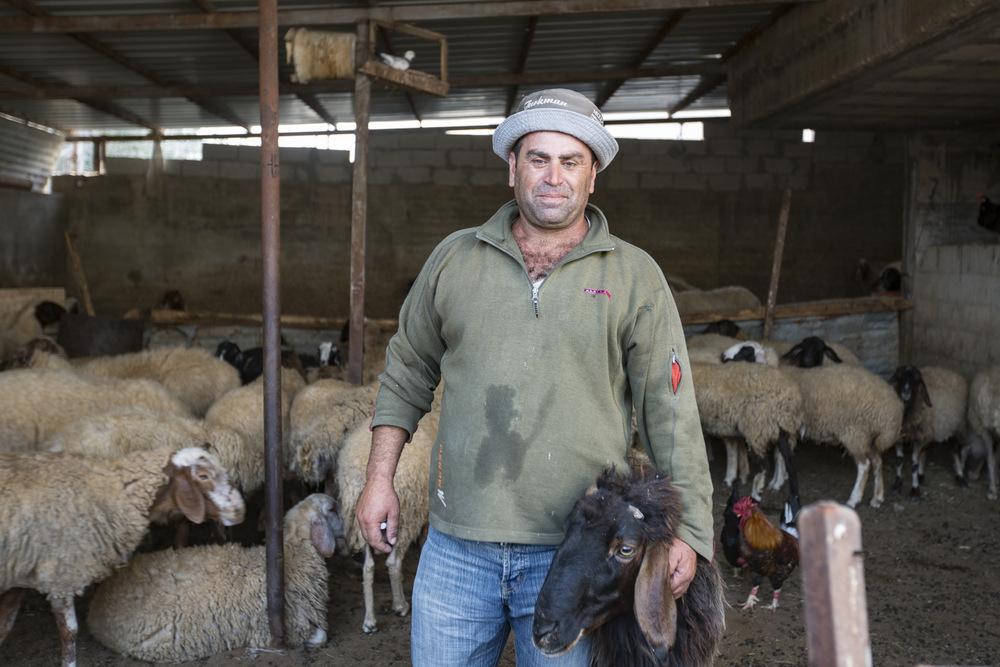 “When the settlement of Elon Moreh was established, things started going downhill. Now we have nowhere to graze our flocks. Every villager who has sheep keeps them in his yard or in a side room. I get sad and frustrated to see the settlers shepherding their flocks on our land, where we used to take our sheep. They even set them to graze in olive groves. When you graze sheep among trees, it ruins and eventually kills the trees.” Mahyoub Shtiyeh, 42, from Salem 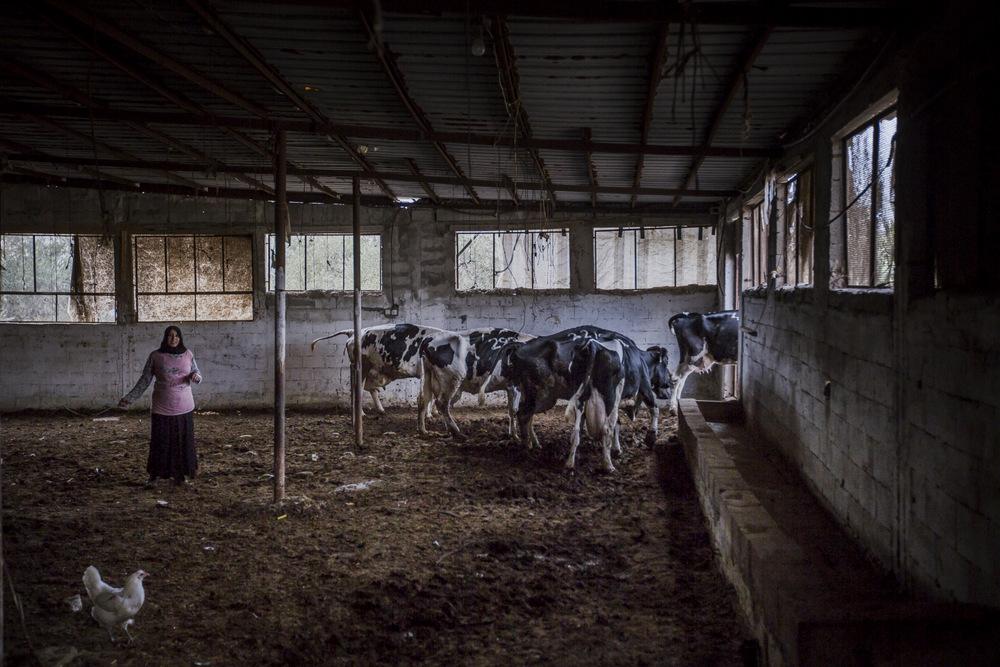 “Because of frequent aggression by the settlers and soldiers, I don’t allow my sons to take the sheep grazing any more. I don’t want to lose my boys. I’m always worried and scared. I asked them to find other work, but once you’re used to the sheep it’s hard to change. Sheep are tied in with our earliest memories. How can we even consider selling them and buying cheese and yoghurts from shops, when we used to supply them?!” Na’amat Shtiyeh, 57, from Salem. Photo shows Taher Shtiyeh’s farm, Salem 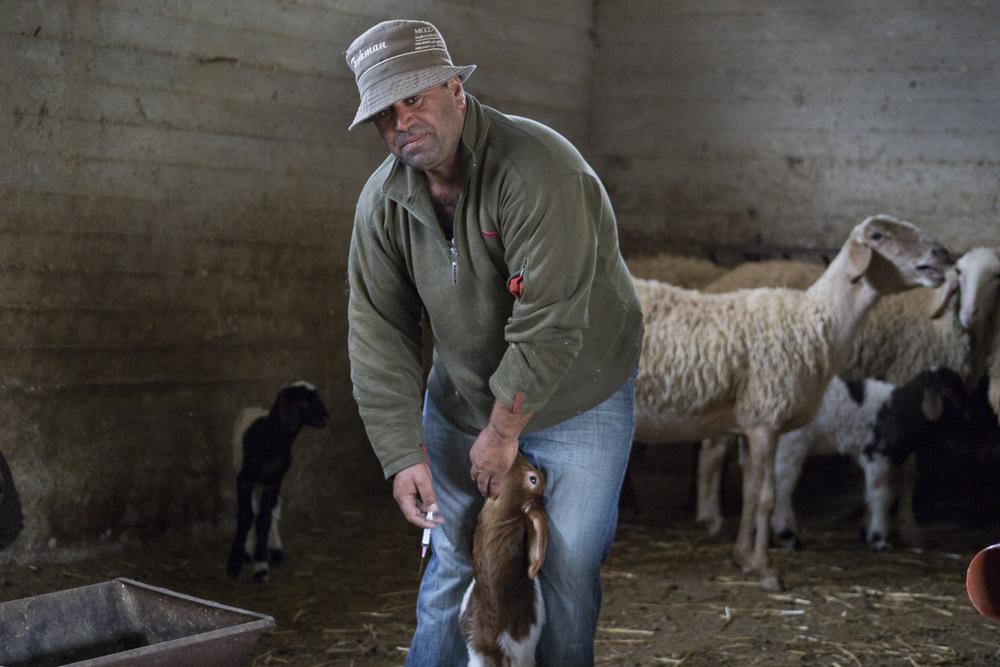 “If soldiers see us, they immediately drive us away. Every time they give a different reason: it’s a military area, they don’t want trouble with the settlers, or sometimes, the security situation is delicate. They never show us any official document proving that it’s been declared a closed military zone, they only say it.” Mahyoub Shtiyeh, 42, from Salem. (Photo shows Taher Shtiyeh) 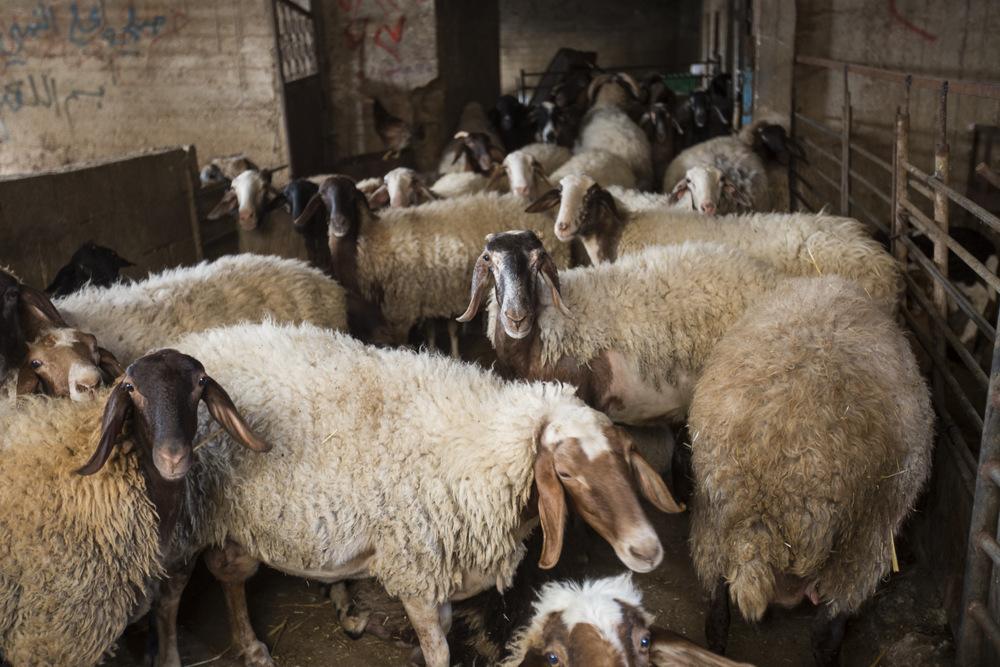 “About five settlers live on Skali’s Farm, and they have more sheep than everyone in our village put together. They have huge flocks – 500 to 1,000 sheep each – while we, the residents of Salem who own the land, are not allowed to cross the road and go far from our homes, and our sheep stay in their pens all the time. They never go out to pasture and we have nowhere to take them.” Mahyoub Shtiyeh, 42, from Salem 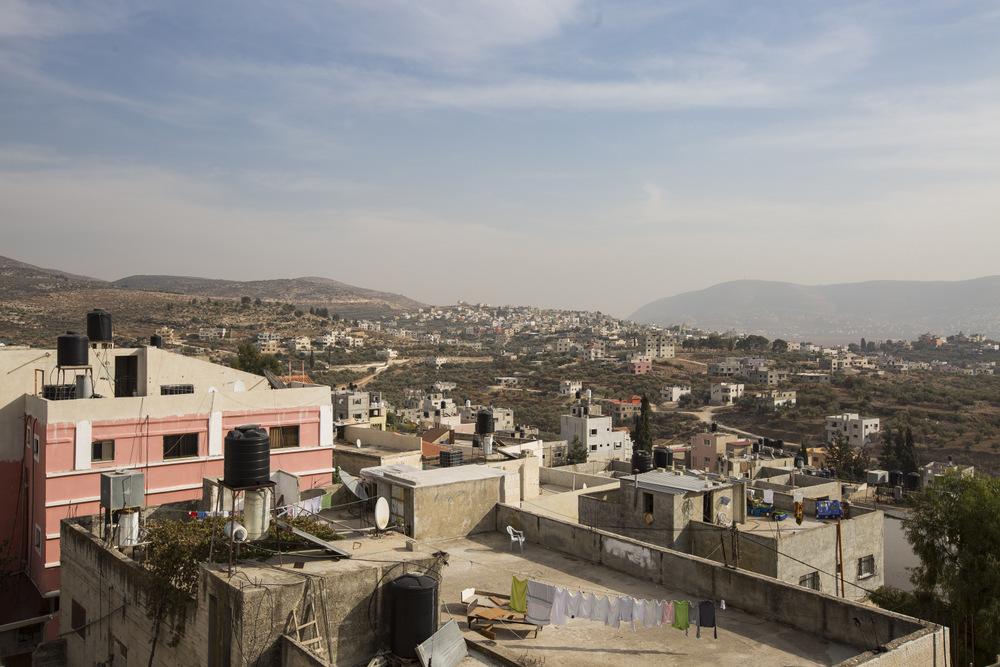 “I own a little more than a hectare of land [1.1 dunams]. There are a lot of olive trees on that land, which I planted more than thirty years ago. A few years ago, during the period of coordination for the olive harvest, I went by there with several people from the village. I saw that the trees had been completely destroyed because one of the settlers takes his sheep to graze there.” Taysir ‘Odeh, 81, from Deir al-Hatab 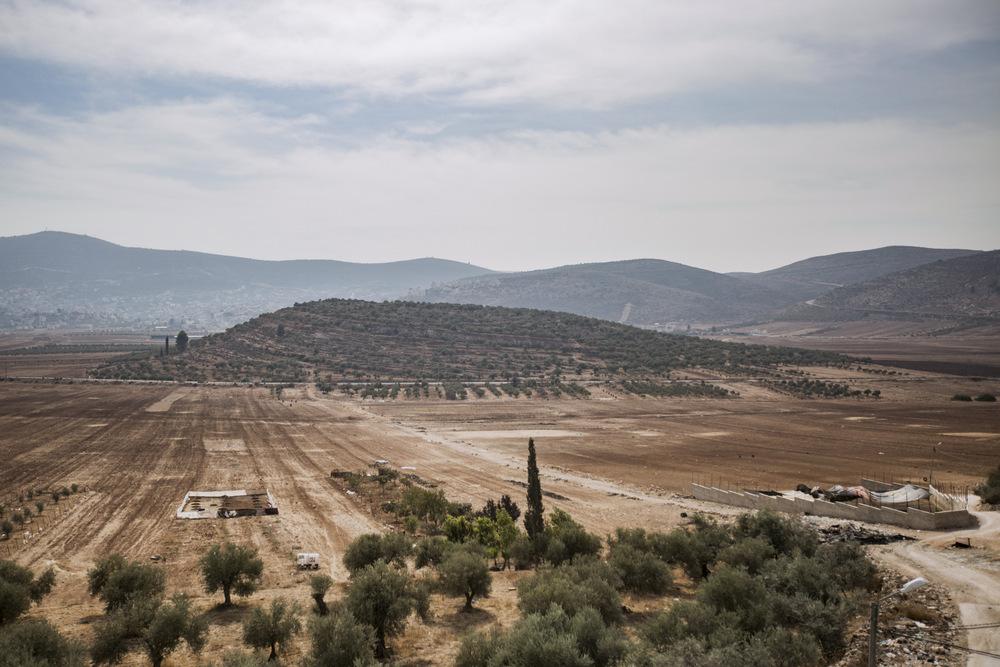 “Our village owns a lot of land, which is full of springs and cisterns. We used to draw water from them for our livestock and fields. Now there’s a settlement east of our village called Skali’s Farm. The minute Skali catches sight of one of us, he starts chasing us and shooting. He also calls soldiers, who immediately come and drive us out of there. We can’t use the cisterns to water our sheep any more." Raddad Shtiyeh, 48, from Salem 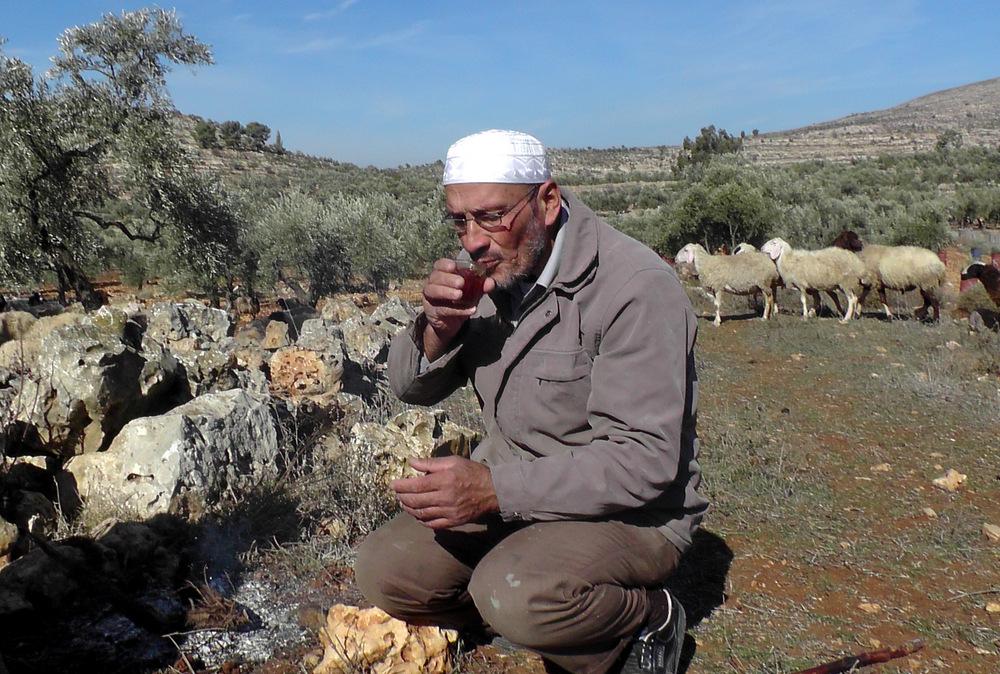 “Our land is very good for grazing. We had more than six cisterns for collecting rainwater. When it rained, I would open up channels so the water could flow into the cisterns. We own a 22.4-hectare plot of land near the settlement of Elon Moreh. There are two cisterns on that land. When there wasn’t enough water in the village, we would go out there for water. Over time, the settlement expanded and now we can’t get to our land any more." Isma’il Anis Isma’il, 54, from Deir al-Hatab 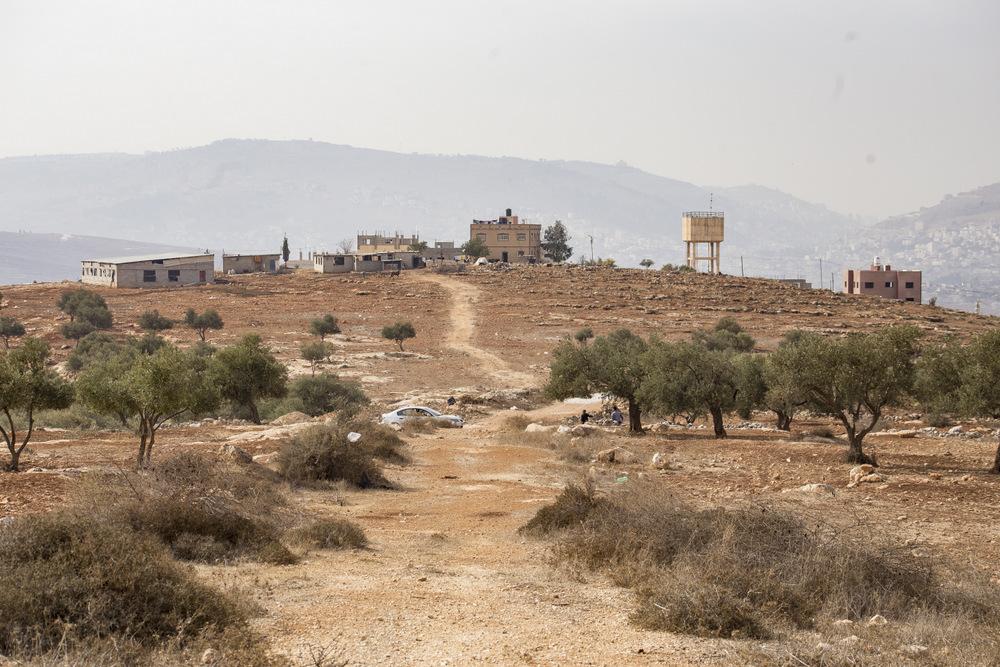 “Going out to the pastures has become dangerous and frightening. If you go out there, you’re risking your life.” Ghaleb Mahmoud ‘Omar ‘Omar, 91, from Deir al-Hatab. Photo shows the village of Salem and a pathway obstructed with stone roadblock, preventing Salem residents from accessing their land. 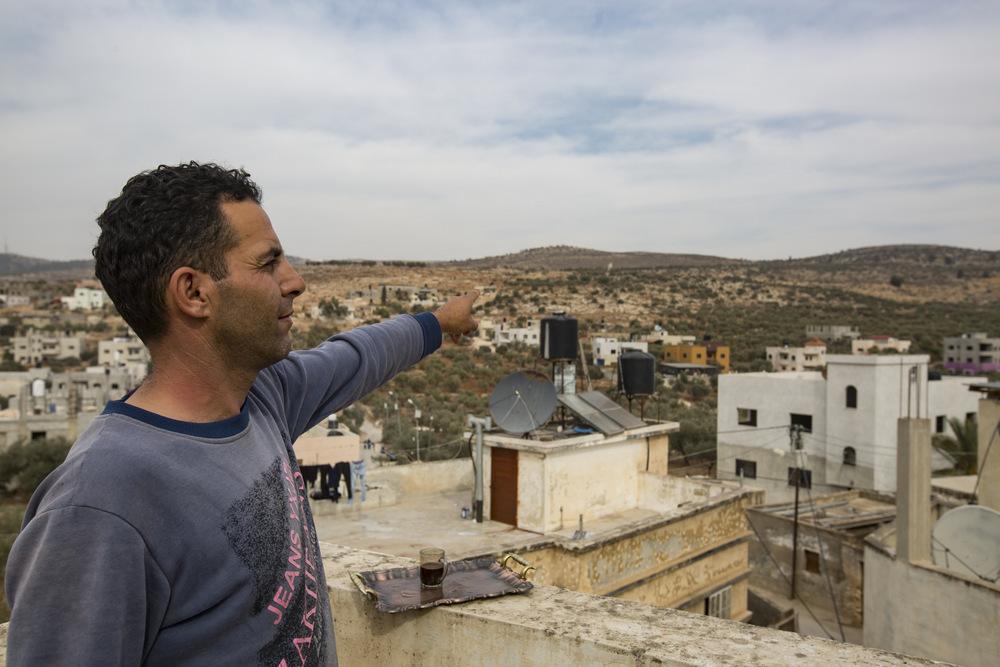 “In 2004 I was assaulted by settlers and the settlement’s security coordinator. It was done in view of soldiers, who saw and did nothing. I was together with a few other shepherds. They attacked us and fired at our sheep. Two dogs were killed on the spot and several sheep were hit. There were many other such incidents.” Ahmad Shtiyeh, 48, from Salem. 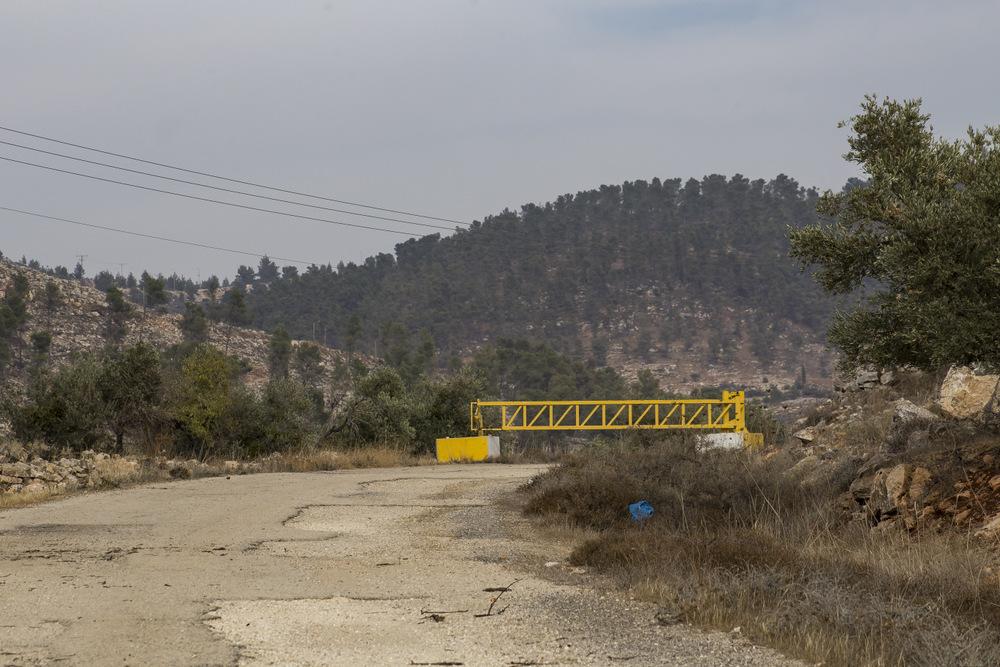 “Last year, during the olive harvest, the soldiers only let us get to our land from 9:00 A.M. to 1:00 P.M. Is that enough time to pick the olives? It’s ridiculous! We need to work every day for a month to finish the harvest. Last year, we produced one tin of olive oil. It used to be thirty-five. The land has been ruined, the land we grew up on. We can’t reach it except for the space of a very few hours, after coordination. It’s very sad." Jamileh Zamel, 78, from Deir al-Hatab 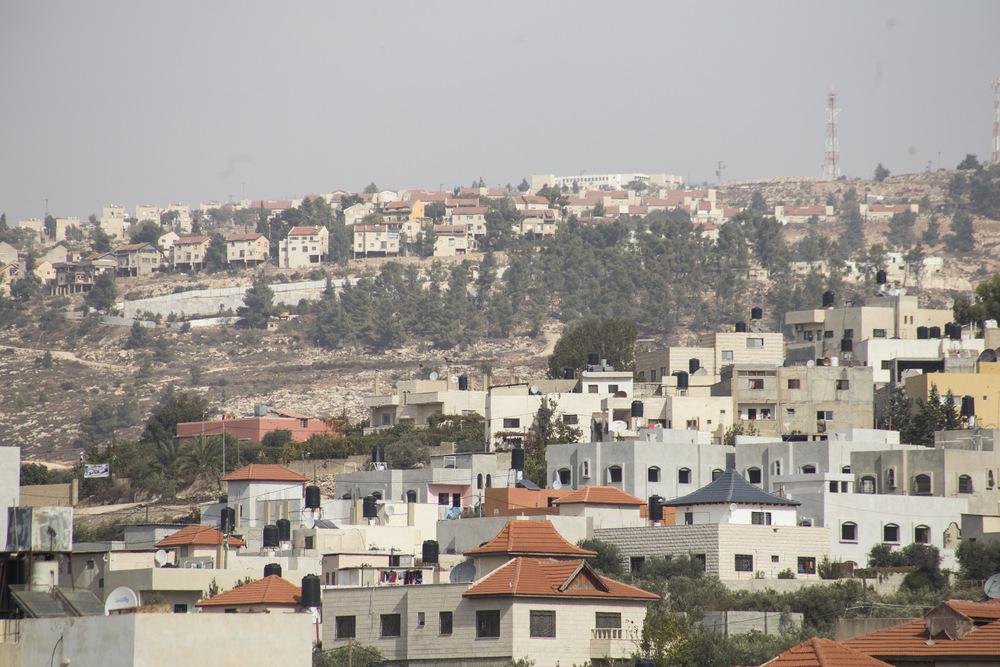 “At present, we get water about once every two weeks. We’re a large family and we need enough water for our basic needs: drinking, laundry, dishwashing, cooking, and cleaning the house and yard. Water is the source of life and we need it. We each shower at most once a week. How can a person shower only once a week in this scorching heat?” Sahar Tawfiq Ahmad Jabur, 44, from Salem. Photo: The village of Salem, with water tanks on its roofs and the settlement of Elon Moreh in the background.