13 years of closure: Once a vibrant commercial center, Beitin near Ramallah has become a ghost village The roadblock at the main entrance to Beitin. Photo: Iyad Hadad, B'Tselem, 4 October 2012.

The village of Beitin, with a population of some 2,300, is located north-east of Ramallah, just off Road 60, which connects the district of Ramallah and al-Birah to the West Bank's northern and southern districts and to the Jordan Valley. The village is also located on a crossroads between Ramallah and al-Birah and the villages located east of the cities, with a population of 60,000 to 70,000.

Until the second intifada, the village thrived both socially and economically. Because of its vicinity to Ramallah and the large volume of traffic passing through, many businesses were established in the village and much money was invested in construction for residential purposes and in the development of medical services. The village population increased by hundreds of people who chose to rent homes in the village because of its convenient location.

When the second intifada broke out, the military set up roadblocks and checkpoints throughout the West Bank, which included blocking off the two entrances to the village: The main entrance was blocked with a metal gate and a dirt mound. The access road to this entrance goes to al-Birah and also leads to the road to the settlement of Beit El. The south-eastern entrance, leading to Road 60, was also blocked with a dirt mound. The military placed the DCO checkpoint on the road between Beitin and al-Birah, where it allows passage only to Palestinians who hold VIP passes and to staff members of international organizations. New businesses and residents who had moved to the village because of the convenient access to al-Birah and Ramallah left due to the roadblocks. About 25 businesses closed down and eight residential construction projects were put on hold. According to Head of the Village Council Diab Muhammad Badwan, about half of the village’s 1,000-person work force are currently unemployed. The rest hold office jobs in Ramallah or in business and agriculture in the area.

In 1972 Farid 'Abd a-Rahman Hamaeyl and his two brothers, of the village of Kfar Malik, opened a stone and marble business in Beitin. In 1996, Hamaeyl moved to Beitin with his family. In his testimony to B'Tselem, he described the success of the store provided him and his family with a good living until the second intifada broke out. The road connected Ramallah to the northern West Bank and there was an incredible amount of commercial traffic on it.  Everyone used this road, Arabs and Jews. The state of commerce in the area was fantastic. Our store was very successful and I had a high income. My five brothers, our families and I – more than 50 individuals – lived off of the business […] This excellent situation carried on until 2000, when the second intifada broke out and the Israeli military started putting roadblocks and obstacles, which  began to affect our work and our income as well as our family and social connections with people in nearby villages. When the military completely closed off the main road to Ramallah and we couldn't even cross by foot,  commercial, construction and all economic activity in the village were completely paralyzed. Our sales went down by 90%. Even today there are some months in which we have no income whatsoever.

Farid Hamaeyl had no choice but to lay off his twenty employees, and two of his brothers went to look for work as paid laborers elsewhere.

I used to plant fruit trees, like apricot, fig, plum and grapes. We took some of the fruit for the family to eat and I’d sell the rest in the Ramallah market. It would take me half an hour to go there, sell the produce and get back home without any trouble. It was a source of extra income for the family and helped pay for my kids' education.

In 1995, a new, modern medical center was established in the village to serve the residents of the entire area. It closed after the entrances to the village were blocked. Saber Hasan Daher, 100, the owner of the building in which the medical center operated told B'Tselem in his testimony: I put USD 600,000 into this building, from savings and from compensation I got for thirty years of work in the United States, Jordan and Bir Zeit. We put some very superior finishes on this building.  The rent for an apartment in the building was USD 450 per month, and for a warehouse was USD 300. The first floor was rented by a few doctors who set up a clinic that specialized in many fields: ear-nose-and throat, surgery, chronic diseases, x-ray. There was also a lab. The doctors were planning to rent the entire building eventually. The center provided services to residents of the village itself and of nearby villages. Patients came even from Ramallah and other cities. I rented the rest of the apartments to people who worked in Ramallah, because Ramallah was just a few minutes away […]. Blocking the entrances has had a very serious impact on our lives. In a single moment, the Beitin road became a ghost road where you never see anyone. The renters started leaving one by one, and the building has been empty since 2003.

The blocked entrances also had a detrimental effect on education. Teachers who were not residents of the village left their jobs at the village schools. Before access was blocked, about 250 students studied in schools in Ramallah, which are considered better than the schools in the village, but because of the difficulty of getting to school, the number has shrunk to 100.

The main road in the village is now deserted. Very few cars pass through and many of the businesses by the side of the road are closed. Buildings stand vacant and agricultural lands have been neglected. In addition, the blocked access to Road 60 has cut off Beitin from the village of Burqah to the south, severing the strong ties between the two villages. Students from Burqah studied in schools in Beitin; Burqah residents came to Beitin for medical care. The head of the village council described the effects that the blocked entrance has had on social ties with residents of nearby villages, which were often fundamental to residents' lives: "People used to come over in the evening, just to play cards, or visit. They don't anymore. People have a hard time getting in and out of the village and they only come for family celebrations." The Civil Administration, citing security, has rejected all attempts made by village residents to have the entrances unblocked. In April 2013, Adv. Yadin Eilam of HaMoked: Center for the Defence of the Individual contacted OC Central Command Major General Nitzan Alon, demanding that all Palestinian residents, not just VIPs, be allowed to cross the DCO checkpoint. In the communication, made on behalf of the mayors of Ramallah and al-Birah and the heads of nine other local councils in the area, Adv. Eilam depicted the severe violation of the residents' fundamental rights, including the right to freedom of movement, freedom of occupation, property, education and dignity. On 22 August 2013, after no pertinent answer was received, Adv. Eilam contacted the State Attorney's Office stating that an HCJ petition would be filed. As of this writing, 9 September 2013, no pertinent response has yet been received.

2018: Plight of Gaza fishermen after Israel’s gradual destruction of their sector 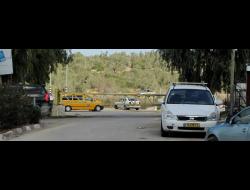