Two killed by soldiers’ live fire in the West Bank: Suspicion that the military permits lethal firing on stone throwers

Since the beginning of Operation Pillar of Defense in Gaza, protest demonstrations have been held throughout the West Bank. In some of these, Palestinians threw stones at security forces and in some cases soldiers and border police responded with live fire.

An investigation into these incidents by B’Tselem raises the suspicion that command echelons have permitted soldiers to use live fire, including in confrontations with stone throwers who are not armed and in situations that are not life threatening to the soldiers. Two Palestinians were killed as a result: At least 39 other Palestinians have been wounded by security forces since Thursday, 15 November 2012, during incidents in which Palestinians threw stones at the forces. Among them, 16 were injured by live fire - including six who were seriously injured.

[The data do not include people injured by inhaling teargas or by pepper spray.]

The serious injuries caused by direct hits from tear gas canisters and rubber-coated bullets are a direct result of existing practices among security forces, including the unlawful firing of these weapons, which B’Tselem has documented extensively in recent years: Soldiers and border policemen shoot aluminum tear gas canisters directly at people, although military regulations forbid it. In the last few years, two Palestinians have died and dozens have been injured by tear gas canisters fired directly at them. In addition, security forces fire rubber bullets at shorter ranges than permitted in the regulations and in a manner that makes it impossible to avoid injuring sensitive parts of the body.

B’Tselem has written urgently to the IDF OC Central Command, the Commander of military forces in Judea and Samaria, and the legal advisor for Judea and Samaria, demanding that it be made unequivocally clear to soldiers and commanders in the West Bank that there is an absolute prohibition on shooting live ammunition at stone throwers. Security forces have at their disposal less lethal means of dealing with demonstrations and with stone throwing, and the use of lethal weapons in such situations is permitted only under extreme circumstances when there is mortal danger and no reasonable alternative. B’Tselem also demanded that crowd control weapons like tear gas and rubber-coated bullets be utilized in accordance with open-fire regulations and in a manner that does not endanger human life. 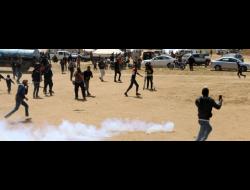