Testimony: Israel deports Ahmad Sabah to the Gaza Strip, far from his wife and son in the West Bank, 21 April 2010

In 1998, Ahmad proposed, my family gave its consent, and we became engaged. We married on 3 February 2000. Since then, I've been living in Dhanabe, a suburb of Tulkarm. My husband left his job with the Palestinian Authority and began to work in agriculture. On 19 January 2001, our son Yazan was born.

Early on the morning of 1 November 2001, the army arrested Ahmad in Dhanabe. He was interrogated and an indictment was filed against him alleging security offenses. He was convicted and sentenced to nine years' imprisonment.*

The first time I was allowed to visit him was five years after he was arrested. That was at Damon Prison. My second visit took place eight months later. I was told that the Shabak [Israel Security Agency] had delayed my permit. From then until his release, I was allowed to visit him once or twice a year. The last time was in April 2009, at a prison in the Negev. He was transferred from one prison to another in Israel several times./>

My son and I have not lived with Ahmad for nine years. Yazan knows his father over the phone. Every time the phone rings, my son says, “Daddy.” You can see that the child associates the phone with his father. Yazan was born seven months before his father was arrested. For more than five years, my son hasn't got a hug from his father. Just once, the first time we visited Ahmad after he was arrested, the prison authorities permitted my husband to hug Yazan. The child barely recognizes his father and always asks me what he was like, about the work he did, and how he lives. I live with my only child in an old rented house, and survive on the allowance my husband receives from the Prisoners' Affairs Ministry and a little help from the family. The allowance is not enough to cover our living costs. I sent half of what I received to my husband so that he could buy things he needed from the prison canteen.


Yesterday, Yazan and I waited for my husband, who was finally released. I prepared and decorated the house. Yazan did not go to school. He waited for his father, who had been missing all these years. My brothers, who were waiting for him at a-Dhahiriyah checkpoint, were informed that the Israeli authorities had expelled him to the Gaza Strip and they told me the news./>/>

Yazan and I were in total shock. I couldn't speak. Yazan has become agitated and doesn't want to speak with anybody. All my dreams were ruined, all the preparations Yazan and I had made for my husband's homecoming were for nothing. My husband Ahmad has no family in Gaza, where the people live under siege. He preferred to remain at Erez Crossing, and is on strike there until they return him to us.
/>

I spoke with him on the phone several times yesterday. My husband's only fault is that his identity card states that it was issued in the Gaza Strip.

I'm not asking for anything impossible. All I ask is that my husband return to me and our small son.

* Ahmad Sabah was convicted of throwing stones, petrol bombs, and grenades, and of belonging to an illegal organization.
/>

Hanan Ibrahim Ahmad Sabah, 35, married with one child, is a resident of Dhanabe, Tulkarm District. Her testimony was given to 'Abd al-Karim Sa'adi at the witness's house on 22 April 2010. 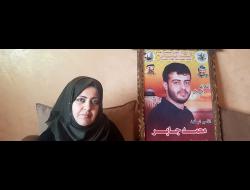 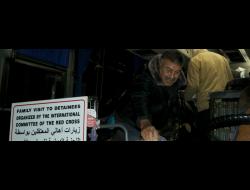