Update: On 29 July 2013, the Office of the Military Advisor in Judea and Samaria informed B’Tselem that the complaints B’Tselem had submitted were under examination. Upon completion, B’Tselem would receive a response. A response had yet to be received in October 2014. At the same time the Office of the Military Advocate for Operational Matters informed B’Tselem that an MPIU investigation of the incident had been launched. To the best of B’Tselem’s knowledge, the investigation was still underway in October 2014. B’Tselem has written to the Legal Adviser in Judea and Samaria demanding that he immediately forbid the use of attack dogs against unarmed Palestinian civilians. The renewed demand follows a recent incident in which two Palestinians who were trying to enter Israel for work were attacked by military dogs. The dogs were in the company of soldiers who then arrested the Palestinians. In her letter, B’Tselem Director Jessica Montell stated that “setting attack dogs on civilians under such circumstances is inherently wrong and morally reprehensible. This use of dogs is dangerous in that they cannot be kept fully under control. It intimidates the population at large and has already caused severe harm to civilians.”

B’Tselem’s investigation into the incident found that, on Wednesday, 15 May 2013, at approximately 7:00 P.M., three Palestinian youths from the town of Beit Ula came to the section of the Separation Barrier close to their town. The youths, who do not have permits to enter Israel, intended to cross the barrier in order to work in Israel. A military force sighted them, called them to halt, and opened fire. Upon hearing the shots, the youths began running back towards the town. As they ran, one of them was struck in the leg by a rubber-coated metal bullet fired at him, and the other two were attacked by dogs. It is suspected that the dogs were set on them by the soldiers. The two required immediate medical attention and were taken by military ambulance to the Barzilai Medical Center in the Israeli city of Ashkelon. The following day, they were questioned by Israel Police and released with a summons for trial at the Ofer military court. The third youth was released several hours after the incident without being questioned.

Military use of dogs against civilians – background

In addition to the incident described above, B’Tselem has documented ten cases over the last two years in which a total of eleven unarmed Palestinian civilians were attacked by military dogs. In five cases,dogs attacked Palestinian laborers attempting to enter Israel for work; in one case, a dog attacked a Palestinian demonstrator; in another case, a dog attacked a Palestinian youth who was on the scene of a clash between other youths and Israeli soldiers; and in the three remaining cases, dogs attacked civilians, including an 88-year-old woman, during military activity in residential areas.

As regards two cases in which B’Tselem demanded that a Military Police investigation be opened, the responses sent to B’Tselem by the MAG Corps indicate that the military is still using dogs in activities involving civilians, with the exception of crowd dispersal during demonstrations. In both of these instances, the MAG Corps addressed the ways in which the dogs were utilized, ignoring the fundamental issue of the choice to use attack dogs. Accordingly, both replies focused on operational blunders and made no reference to the policy that enables the unleashing of attack dogs on unarmed civilians.

For example, regarding an incident in which a dog attacked a Palestinian demonstrator in Kafr Qadum in March 2012, the MAG Corps wrote that, after reviewing the case, it had decided not to order an investigation as “it took so long to pry the dog off the complainant’s hand because stones were being thrown at the soldier who was trying to release the dog’s jaws, demonstrators were kicking the dog, and the complainant was constantly moving. All this made the dog clamp down harder and bite with renewed force. This was compounded by the fact that the soldiers were not wearing gas masks, while tear gas had been fired in the area [by the soldiers].”

Regarding another incident, in which a dog attacked a Palestinian woman and her son, a minor, during a military arrest mission in a home in the town of Idhna in December 2011, the MAG Corps wrote that a Military Police investigation would not be opened as “a professional mistake was made by the force commanding the dog.”

These responses indicate that the military considers it legitimate to use attack dogs in such a way that may cause grave injury to unarmed civilians, whether intentionally or otherwise. Albeit, regarding these two cases, the MAG Corps informed B’Tselem that the issue of using dogs, both in “arrest missions” and “during disturbances of the peace”, has recently been reviewed. Concerning the incident in which a dog was unleashed on a demonstrator, the Corps wrote that “in light of the event, lessons have been learned and new guidelines have been formed for using attack dogs during disturbances of the peace.” Indeed, shortly after the said incident of March 2012, which was documented on video by a B’Tselem volunteer, the media reported that the military had decided to stop using dogs to disperse demonstrations in the West Bank. However, the recent attack on the two youths, which occurred in May 2013, shows that the military is still using dogs to attack Palestinian laborers attempting to enter Israel without permits.

Beating and Abuse
The Separation Barrier
Workers from the Territories 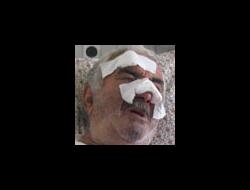 Testimony: Soldiers assault elderly farmer while working his land next to the Separation Barrier, December 2009
