A Routine Founded on Violence
15 February 2017 In January B’Tselem documented two incidents in which soldiers entered homes in Kafr Qadum, a village west of the city of Nablus, at night. They threatened the residents, warning them not to participate in the weekly protests in the village. These demonstrations, have been held since July 2011 to protest that residents’ access to the road that links their village to Nablus has been cut off. The road runs between the two sections of the settlement of Kedumim which was expanded in 2003. Because their access to the road has been barred, villagers must travel by a bypass road that makes the trip to Nablus much longer, about 40 minutes instead of about 15.

B’Tselem’s investigation indicates that the soldiers, who wore masks, conducted themselves violently and aggressively when they entered the homes. They threatened the residents’ - including children - and shoved an elderly woman, who fell down and lost consciousness. Such threats violate the villagers’ legitimate and legally recognized rights of expression, protest and demonstration, and form part of clear military policy. The following descriptions of the incidents are based on our investigation and testimonies collected by B’Tselem field researcher Abdulkarim Sadi:

At about midnight, seven to nine masked soldiers entered the home of ‘Imad (44) and Hiyam (36) a-Shteiwi. The soldiers searched the rooms and assembled the parents and their four children, aged 10 through 15, in the living room. The soldiers asked the children’s names, and one soldier then ordered Hiyam a-Shteiwi and three of her sons to go into the bedroom. ‘Imad a-Shteiwi and his 13-year-old son Qusai remained in the living room. An officer on the scene took Qusai aside and questioned him for about 10 minutes concerning participation in the weekly demonstrations, trying to match Qusai to photographs he had of teenagers and children.

‘Imad a-Shteiwi said that Qusai denied participating in the demonstrations. In testimony taken by B’Tselem, he recalled:

I felt that Qusai was scared and I told the officer that he’s interested in cats, dogs, and donkeys, not in demonstrations and processions. The officer continued to intimidate him and ask him about his participation in the weekly processions. He threatened that if he’d be caught by soldiers, they’d hurt him.

After about 10 minutes, the soldiers left the home. Hiyam a-Shteiwi summed up the incident as follows:

The soldiers behave barbarically: going into homes and frightening children at night, and tracking mud all over the house. At about 12:30 A.M., Iman (39) and Hikmat (42) a-Shteiwi woke up in their home in the east of the village after they heard voices and their front door being tried. When Hikmat a-Shteiwi opened the door, about seven masked soldiers came in. Another group of soldiers waited outside the house. The five children in the family, aged five through 12, were also awakened by the commotion.

The soldiers shut Iman a-Shteiwi in one of the rooms. They then then took her two oldest sons, 12-year-old Tareq and 11-year-old Malik, one after the other into their parents’ bedroom, where they questioned each boy for several minutes. The questions concerned their participation in the weekly demonstration in the village. The soldiers also photographed the boys on their cell phones. In testimony taken by B’Tselem, Iman a-Shteiwi stated: While they kept me in the children’s room I tried several times to leave the room, but two soldiers who were in the room kept me from doing so and tried to shut me up each time I asked what was happening with my son Tareq. The soldiers kept me there for seven or eight minutes until they finished questioning my son Tareq, who is only 12. Only then did they let me to go to the living room and check that he was okay. Tareq was pale and I could see that he was frightened by the soldiers and their appearance. He told me that after the soldiers questioned him, they photographed him and Malik.

After five to seven minutes, the soldiers brought my son Malik out to the living room. He was also scared and I hugged him. He told me that the soldiers held him and warned him not to throw stones or attend the weekly protests. He said that they picked him up and threw him on our bed. After the soldiers finished questioning my two boys, they gathered in the living room. One of them sat down opposite my husband and told him in a threatening tone that our sons are participating in the procession, that this is the last warning he’s giving us, and that next time he wouldn’t be pleased. The soldiers left after about 15 minutes, after they’d scared the whole family, particularly my little boys. They dirtied the floor with dust and mud. My little boys are still scared because of that night. At about 11:30 P.M., Hamzah Jum’ah, 46, heard voices outside his home in the west of the village. When he looked out of the window, he saw that the house was surrounded by masked soldiers. One of the soldiers ordered him to open the front door. After his wife calmed the children, Jum’ah opened the door and the soldiers came inside. Four of them took him into the living room and questioned him as to his whereabouts during the weekly protests. According to Jum’ah’s testimony, after he told the soldiers that he is at the Friday prayers during the demonstrations, and that he is the head of the village council and the owner of a carpentry shop, they demanded that he undertake not to participate in the demonstrations. They threatened that if he refused they would close his carpentry shop and demolish his home.

The interrogation lasted about 15 minutes. The soldiers didn’t destroy anything in the home, they just conducted a search and left things topsy-turvy. Before they left, one soldier warned me to stay home, look after my family and my business, and stop participating in protests against Israel – in other words, the weekly procession.

Between 12:30 and 1:00 A.M., the soldiers reached a compound in the west of Kafr Qadum that comprises six houses. During the raid, the soldiers entered the apartment of Shafiqa Jum’ah, an 80-year-old widow. She lives with her granddaughters and they look after her. One of the soldiers shover her and knocked her to the ground. Her son heard the shouting from the apartment and tried to come over to help her, but was held back by the soldiers. In testimony taken by B’Tselem on 10 January 2017, Shafiqa Jum’ah related the following:

I woke up from the sound of loud knocking at the front door and heard people trying to open it. I immediately got up and woke my granddaughters. I opened the door and a group of masked soldiers came inside. They shouted at us. I told them to be quiet so that they wouldn’t scare my granddaughters who were with me, but they were very worked up. One of the soldiers shoved me. I fell down, and banged into my bed. I lost consciousness. My two sisters and I were sleeping in Grandma’s home. Grandma woke us up and told us that soldiers were raiding the house. I got up and got dressed. I heard shouting and commotion by the front door. My grandmother opened the door and a group of armed and masked soldiers charged into the room we were in. When Grandma asked them not to frighten us, one of the soldiers shoved her and she fell down. Her body struck the bed. My sisters and I started screaming. We managed to pick her up and place her in the bed. She was shaking and complaining of pain, and then she lost consciousness. I tried to leave the room to get some perfume to help her come round, but the soldiers wouldn’t let me leave. I began to shout so that my father or my uncles would come, but the soldiers silenced me. A few minutes later the soldiers left the room, but stayed in the family compound.

Members of the family said that the soldiers who went into other apartments stated that they had come because of the weekly demonstrations. About half an hour later, after the soldiers left the compound, Shafiqa Jum’ah’s sons called for a Red Crescent ambulance, which took her to hospital in Qalqiliyah, where she was examined and then discharged. In testimony taken by B’Tselem the day after the incident, Shafiqa Jum’ah said:

Today I’m lying in bed and my head and body ache. The soldiers raided my sons’ homes and shouted at them. The soldiers’ behavior, their uniforms, and their black face masks frighten the women and children. My granddaughters are still frightened by what happened.

At about 1:00 A.M., masked soldiers arrived at the home of ‘Akef ‘Abdallah Jum’ah, 54, a retiree who lives in the west of the village with his wife Najah, 51, his sons Raed, 24 and Ra’uf, 27, Ra’uf’s wife ‘Athir, 24, and that couple’s two young children. When ‘Akef Jum’ah saw the soldiers arriving at his home he went out to the yard. The soldiers led him to the storeroom and demanded to see his two sons. ‘Akef called for Raed and Ra’uf, and the soldiers proceeded to question the three men concerning the weekly demonstrations in the village. At the same time, other soldiers searched the three stories of the house. In testimony taken by B’Tselem on 12 January 2017, ‘Akef Jum’ah described the soldiers’ behavior: One of the soldiers, I think he was an officer, argued for half an hour that my sons are making trouble and that he recognizes my face from the demonstrations. He warned us not to participate in the weekly procession. He added that tonight would be a quiet raid without causing damage, but if we keep on taking part in the processions, the military will damage our home and property. He took pictures of us, our identity cards, our house and cars on his cell phone. I later found out that while my home was being searched, the soldiers kept my wife, Ra’uf’s wife, and his children confined to one of the rooms.

Nighttime raids on Palestinian homes are part of the routine oppression of occupation and are a daily occurrence throughout the West Bank. The soldiers’ aggressive conduct - which included entering homes with their faces covered, making threats, intimidating and questioning children, leaving dirt and disorder behind, and even shoving an 80-year-old woman, Shafiqa Jum’ah - is not exceptional. As in this instance, such raids are sometimes used to deter residents from expressing legitimate protest and taking part in demonstations.

Similarly, the attempts to stop Qadum residents’ legitimate protest against cutting off their access to the road, use of which has been transferred exclusively to settlers, are not new either. In December, video footage showed masked soldiers with batons seizing Muamen Shteiwi, a 7-year-old boy, during a demonstration in Kafr Qadum. The soldiers held the boy for some 10 minutes while firing at his friends. Over the years, B’Tselem has documented additional incidents involving the use of violence and threats by the military in an attempt to silence the protest in the village.

This conduct by the military constitutes the implementation of a clear policy, known to senior military officials, that is designed to handle and silence the protests by the residents of Kafr Qadum. Such a policy is unlawful and violates the villagers’ legitimate right of protest. Therefore, it must be terminated immediately. 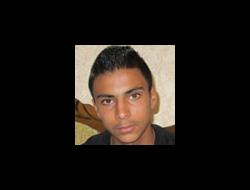