Video: 19 years after massacre at Tomb of the Patriarchs, Israel continues to entrench separation policy in Hebron

Israeli security forces divided a road in the center of Hebron, separating it into a paved road for Jews and a narrow, rough passage for Palestinians

Since 1994, when settler Baruch Goldstein massacred Moslem worshipers in the Tomb of the Patriarchs, the Israeli military has adopted an official policy of separating Jews and Moslems in the city of Hebron. The policy is implemented primarily through severe restrictions on Palestinian travel and movement in downtown Hebron, where most Israeli settlement outposts are located. Some of the main roads in the area are completely off limits to Palestinians, and many roads bar any and all Palestinian vehicles. Israel’s strict restrictions have made the lives of Palestinians in downtown Hebron intolerable, forcing many to leave their homes and jobs. Construction of the new fence in Hebron. On the left: the narrow passageway designated for Palestinians. Photo: Manal al-Ja'bri, B'Tselem, 31 Dec. 2012

One of the roads prohibited to Palestinian vehicles runs through the neighborhood of a-Salaimeh and leads to the the Tomb of the Patriarchs. The road is about 70 meters long and has a checkpoint at either end: the Bakery Checkpoint at the northern end of the road and the Bench Checkpoint at its southern end. Until recently, Israeli security forces permitted Palestinian pedestrians and cyclists on the street. In order to transport supplies through the street, Palestinians were forced to use a horse-drawn wagon or a hand cart. Settlers and Israeli civilians are permitted to walk and drive cars on the street.

On 23 September 2012 Israeli security forces laid out a chain-link fence, dividing the road lengthwise. On one side of the fence is a paved road and on the other, a narrow pedestrian passageway. Since the fence was erected, Israeli security forces have not allowed Palestinians to walkon the road. Instead they direct Palestinians to the narrow passageway, which is unpaved, rough and ends in a small staircase. The passage is completely impassible by wheelchair and is very difficult to navigate with a baby carriage, pushcart or bicycle. B’Tselem videoed the construction of the fence and of Border Police keeping Palestinians from going on the road.

Yihya Abu Rajab, a cobbler who lives in a-Salaimeh, told B’Tselem that when work on the fence began, he and other residents of the neighborhood spoke with a Civil Administration officer who came to the site. He assured them that the fence would not affect their lives, and was only meant to “organize” the road. According to Mr. Abu Rajab, the officer promised them that there would be a gate in the fence through which they could pass to the other side of the street.

Yihya Abu Rajab told B’Tselem about the difficulties he and his neighbors encountered in the days after the fence was erected:

“Before the fence was erected I used to transport both raw materials and the shoes I make in a pushcart. After the fence was erected, we were surprised to see that it has no gate and that we have no way to get out to the street. At first, we went around the fence to get to the street, and the Border Police let us to go by without any trouble. But over the past few days the policemen have not been allowing us to go on the paved road. They left us only a narrow lane behind the fence that leads to stone steps. I can’t push the cart through the narrow passage and the steps, and I have to carry the merchandise on my back and get my children to help me. In addition, the Border Police prevent the children from crossing the paved road on their way to and from school. The children used to ride on their bikes in the street and also ride to the grocery shop. Now they have to pick up their bikes and carry both bike and groceries. Once I came on a bicycle, carrying a large container of olive oil and shoe materials, but the policemen wouldn’t let me go on the paved road.” Amer Burqan waiting while a Border Policeman opens the gate in the fence. Photo: Ramzi Maqdisi.

Another resident of the neighborhood, ‘Amer Badawi ‘Abd al-Mu’ti Burqan, 41, married with 10 children, also recounted the difficulties resulting from the closing of the street. Burqan told B’Tselem that he had been injured in a car accident a year and a half ago. He has been wheelchair-bound ever since and requires physical therapy.

“Even before the fence was built I had a hard time with the checkpoints near my home. I always need to ask them to open a special gate for me because I can’t go through turnstiles with a wheelchair. Since they built the fence in the middle of road, I can’t get through the narrow trail for Palestinians on my wheelchair. There’s a locked gate in the fence and the Border Police at the checkpoint, about 30 meters away from the gate, have the key. Sometimes I have to wait 15 minutes and sometimes much longer for them to open the gate. I need to go to physical therapy twice a week, but lately I’ve hardly been going because it has become so difficult and complicated.” 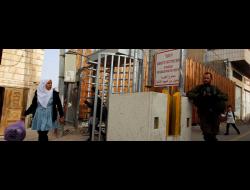