UN report is a reminder: Over 1.5 million people live in the Gaza Strip. It is not a battlefield Last summer’s Gaza conflict, known as Operation Protective Edge, began on 8 July 2014 and ended about fifty days later, on 26 August 2014. The devastation it would leave in its wake was known even when the fighting was still underway. The massive scale of it became clear once it was over. According to UN figures, more than 2,200 people were killed in Gaza, nearly 70% of them civilians who did not take part in the hostilities, including hundreds of women and children. Thousands of houses were destroyed and tens of thousands of people were displaced from their homes. According to B’Tselem figures, six civilians – including a young boy – were killed in Israel and 66 members of the Israeli security forces were killed in the fighting. There are no figures to convey the terror and fear experienced by millions of people during and after the war.

Even during the fighting, Israeli officials, from Prime Minister Benjamin Netanyahu down to the officers serving in the Gaza Strip, all claimed that the military was doing everything in its power to avoid harm to civilians, above and beyond its legal obligations, and far more than any other army does. They claimed that any harm caused to civilians during the fighting in Gaza was Hamas’ fault, as Hamas had carried out its activities from within the civilian population, using it as a human shield, and made the conscious choice to place this population and its property in harm’s way.

This was the official position adopted by the Israeli government. Statements to this effect were also made in response to the report published on 22 June 2015 by the commission of inquiry (COI) appointed by the UN Human Rights Council. The report examined the lawfulness of the conduct by both Israel and Palestinian armed groups during the fighting in Gaza.

In its report, the COI rejects Israel’s position, holding that Israel is responsible for the massive harm it inflicted on the civilian population in the Gaza Strip over the summer. The COI goes on to find that the Israeli military did not do enough to prevent harm to civilians and that in some cases, persisted in a policy that had already been proven to cause massive harm to civilians. These findings do not address any specific action taken by the military during the fighting. Rather, the COI rejects the prevailing view among Israeli government and military officials regarding what is permitted and what is not during fighting in a densely populated area such as the Gaza Strip. According to the COI’s report, the massive harm to the civilian population during the fighting cannot be justified in any way, and international humanitarian law (IHL) cannot be interpreted in such a way that would make this harm lawful.

These findings do not ignore the conduct of armed Palestinian groups. First, the COI asserts that these groups violated IHL. Their goal was to harm Israeli civilians and communities inside Israel, and they set out to do so by using unlawful weapons that cannot distinguish between military and civilian targets, terrorizing the civilian population inside Israel in the process.

Second, when referring to these groups’ mode of operation, the COI did address Israel’s allegations that Palestinian armed groups deliberately fired from within the civilian population in Gaza, using civilians as a human shield, and that they concealed weapons inside civilian homes, using civilian presence as a protection. The COI states it was unable to probe these allegations, partly because Hamas did not allow a serious investigation and because Israel did not allow members of the committee to enter the Gaza Strip. The COI goes on to say that if the allegations are true, these actions are clearly unlawful, yet even so, these actions do not relieve Israel of its IHL obligations. Consequently, the committee rejects Israel’s claim that its response was justified given Hamas’ modus operandi, and stated that under no circumstances can Israel’s extreme, destructive and deadly response be justified.

Ever since the COI was appointed, the discussion inside Israel has revolved primarily around the members of the COI, its sources and the general conduct of the Human Rights Council. A discussion about the actual findings and recommendations has been virtually absent from public discourse. This document fills this gap. The COI’s report, spanning almost 200 pages, addresses to a variety of issues related to Israel’s conduct during the war. We review several of these below. B’Tselem reported on some of these issues during and after the war, expressing deep concern that the conduct in question was unlawful. A. Israel did not do enough to protect civilians and civilian objects

The COI asserts that Israel’s conduct failed to comply with its obligations under IHL to protect civilians and prevent, or at least minimize, the harm caused to them. Some examples:

The COI asserts that these combat methods are incongruent with the obligation of all parties to the conflict to take precautions to protect civilians, or at the least, to minimize the harm caused to them in such a densely populated area. B. Responsibility for harm to civilians rests with senior government and military officials

The COI’s findings are aimed at senior government and military officials, who dictated the policy and bear the responsibility for its deadly results. The report considers two aspects of responsibility – authorizing illegal practices and abstaining from withdrawing orders or procedures even after their deadly outcome became apparent.

The COI identified three areas in which policies at odds with IHL were instituted: airstrikes on residential buildings, methodical destruction of homes, particularly in areas close to the Green Line, and use of indiscriminate weapons in densely populated areas. The COI states that it believes these combat methods, which are indicative of broader policies on warfare in general, were approved by the highest ranking officials.

The COI stresses that these senior officials bear responsibility not just for formulating the policy but also for refraining from changing or discontinuing practices that were proven in real time to cause extensive harm to civilians, indicating that the harm was consistent with Israeli policy. In this context, the COI puts a special emphasis on the massive fire power used from the air and the sea during operations in the a-Shuja’iyeh neighborhood of Gaza City and in Rafah following two incidents in which soldiers were harmed by Palestinians. The military bombed homes and used artillery fire for hours, and the massive harm to civilians quickly became apparent. Nevertheless, no action was taken to stop the attacks. The COI also addresses the inefficacy of the warnings. They were proven ineffective in the early days of the conflict, after several buildings collapsed with residents still inside. But in this matter too, the military persisted using the same methods to warn residents, and treated them as effective. Senior government and military officials did nothing to change the situation.

The COI notes that Israel has taken many steps to improve its investigation mechanism and bring it up to international standards, but adds that further improvements are required to ensure Israel fulfils its duty to investigate, prosecute and hold accountable those responsible for violations of IHL and international human rights law.

The COI expresses concern over procedural, structural and substantive issues that adversely affect Israel’s ability to fulfil its duty to investigate. In this context, it mentions the dual role of Israel’s Military Advocate General (MAG), who is responsible both for providing the military with legal advice in real time as well as for deciding whether or not to launch criminal investigations after the fact. the This places the MAG in a conflict of interests when questions arise with regard to the legality of an operation carried out on the basis of orders he approved, such as deciding what constitutes a legitimate “military target”.

The COI also notes that the existing investigation mechanism precludes any investigation of policy issues and the responsibility of top government and military officials for formulating policy.

Given these issues, and the results of the investigations Israel conducted after previous rounds of fighting in the Gaza Strip, the COI expresses doubt that the mechanism presently in place can achieve justice for the victims, and raises serious questions about whether this mechanism can be used at all to bring to justice those who are really responsible for the harm to civilians.

Conclusion: There are people living in Gaza

The COI looks at the Gaza Strip and clearly sees an area that is home to human beings who are entitled to protection during conflict. The perspective the COI offers on what took place in Gaza in the summer of 2014 is the mirror image of Israel’s perspective. While Israeli officials perceive Gaza as a battlefield where some people also happen to live, the COI sees Gaza as a densely populated area inhabited by people, where fighting sometimes also takes place.

The COI regards IHL as a relevant and adequate tool for assessing the conduct of Israel and Palestinian armed groups. It determines that the there is a limit to how far the rules of IHL can be stretched, and that their interpretation must remain within the confines of reason and maintain their essence as rules meant to protect civilians during armed conflict. Contrary to Israel’s official position, the COI clarifies that is not enough to merely follow the letter of the law, but that the conduct itself must uphold the essence and spirit of IHL, which is protecting civilians.

Several days after the report was published, the COI’s chair, Justice Mary McGowan Davis, gave an interview to Israeli daily Haaretz, where she said “It is not OK to drop a one-ton bomb in the middle of a neighborhood”. No one needs a degree in law or ethics to understand this clear, incisive message, just as no one needs an advanced degree in engineering, or extensive experience as an operational investigator with the air force to understand what would happen if such a bomb were dropped in the middle of a densely populated civilian area. Some orders will never be legitimate no matter how much legal jargon is thrown at them. Some military practices can never be defended, and no expert on international law worth their salt would attempt to do so.

This clear voice, the voice of reason, of law, of morality is out there. Will anyone inside Israel’s government, its Ministry of Justice, the parliament, the military command or the MAG Corps hear it? Will anyone in Israel’s governing institutions manage to see that there are people living in Gaza? 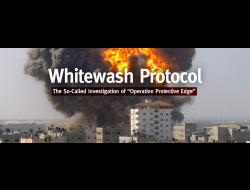