On Tuesday, 2 Feb. 2021, at around midday, four busloads of soldiers and dozens of heavy military vehicles, including tanks and armored personnel carriers, drove up to “Firing Zone 918” and parked along its boundaries. The next day, at around 1:00 A.M., the forces started shelling practice that lasted until the early morning hours. The explosions and sounds of gunfire caused great fear among area communities, and especially the neighboring community of Khashm a-Daraj.

At around 6:00 A.M., the forces entered the community of Khirbet Jenbah in Masafer Yatta, drove among homes and near the community school and trampled fields of wheat and barley. They damaged a cave that one of the families used for storage, as well as a power cable leading from the village’s solar panel system to the mosque and the medical clinic, a water pipe serving one of the families, and the pathway connecting the community to Khirbet Bir al-‘Eid. From there, the forces continued north, trampling the fields of residents of Khirbet Bir al-‘Eid and Khirbet Susiya. They left the area at around 2:30 P.M. 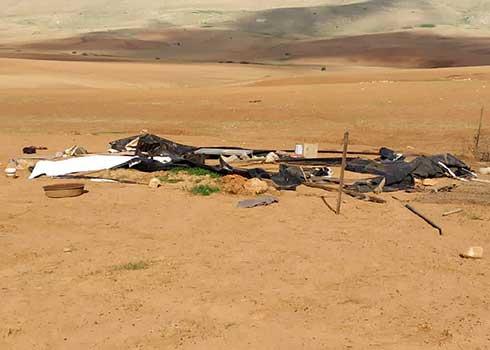 On Sunday, 5 December 2021, at around 8:00 A.M., Civil Administration personnel accompanied by soldiers and equipped with a bulldozer arrived at Khirbet Humsah al-Foqa in the northern Jordan Valley. The forces dismantled and confiscated two unoccupied tents owned by two families from the same extended family. These tents were pitched again after they were destroyed and confiscated, along with 11 other tents used as residences, earlier this year, as part of Israel’s efforts to drive the residents off their lands.

On Thursday, 2 December 2021, at around 9:00 A.M., Civil Administration personnel accompanied by soldiers and equipped with a bulldozer arrived at Khirbet al-Markaz in the area of Masafer Yatta, in the South Hebron Hills. The forces demolished four tin-roofed stone structures, which housed four families with a total number of 20 members, including six minors. The forces also demolished three agricultural structures made of tin that were owned by one of the families.

The Civil Administration issued the demolition orders back in 2014 alleging the homes were located inside Firing Zone 918. The Planning Council has rejected a detailed plan submitted by the residents since. On 17 November 2021, the HCJ dismissed the residents’ appeal against the demolition.

In the early 1980s, Israel declared an area of about 3,000 hectares in the South Hebron Hills known as Masafer Yatta a restricted military zone and dubbed it ‘Firing Zone 918’. Dozens of Palestinian families had been living in the area for years, since before Israel occupied the West Bank in 1967. They lived in 12 small villages, in natural or man-made caves, some all year round and others only seasonally, and earned a living as farmers and shepherds.

On Wednesday, 1 December 2021, at around 4:00 A.M., Civil Administration personnel accompanied by soldiers and equipped with four crane trucks arrived at Khirbet Ras al-Ahmar in the northern Jordan Valley. The forces confiscated six tractors, three with trailers, four water trailers and five cars, claiming they were located in Firing Zone 901.

On Sunday morning, 28 Nov. 2021, at around 8:00 A.M., Civil Administration personnel and soldiers came with a bulldozer and crane truck to the area of Khirbet 'Atuf in the northern Jordan Valley. The force dismantled and confiscated a pipe, about one kilometer long, that was meant to provide water for area farmers. The installation of the pipe, funded by AFC, began last month. 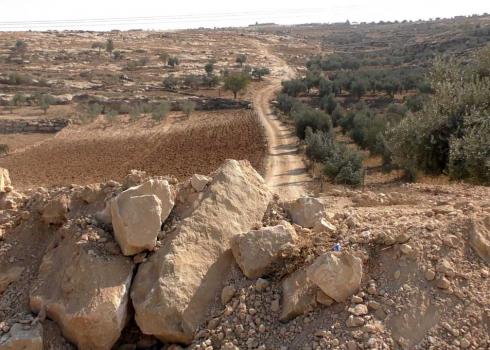 The blockage the Civil Administration erected at the entrance to the dirt road. Photo by Nasser Nawaj’ah, B’Tselem, 18 Nov. 2021

On Thursday, 18 November 2021, at around 10:00 A.M., Civil Administration personnel came with a military escort and a bulldozer to the Masafer Yatta area of the South Hebron Hills and blocked the entrance to a dirt road leading to the community of Khallet al-Mayah. From there, the forces continued south and blocked a dirt road leading from Road 317 to the community of She’b al-Batem, which was reopened the following day. 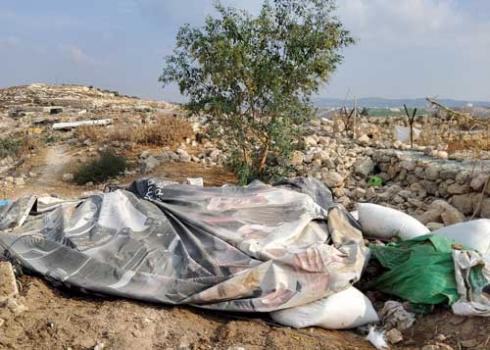 One of the tents demolished by the forces. Photo by Nasser Nawaj’ah, B’Tselem, 17 Nov. 2021

On Tuesday, 16 November 2021, at around 9:00 A.M., Civil Administration personnel came with a military and Border Police escort, a bulldozer and a crane truck to the community of Khirbet Jamrurah, northwest of Hebron. The forces demolished three residential tents belonging to an extended family, numbering 17 people in total, including nine minors. In addition, the forces demolished a tin structure that served as a livestock enclosure. In 2007, the military expelled the family along with about 200 other Palestinians and demolished their homes in Khirbet Qassa, which remained on the western side of the Separation Barrier.

On Monday, 11 November 2021, at around 9:00 A.M., Civil Administration personnel came with a Border Police escort, a truck and a bulldozer to the village of a-Rifa'iya, east of Yatta in Hebron District. The forces dismantled and confiscated a tent that served as a livestock enclosure owned by a family from the village. The force then demolished the foundations laid by another family in the village for the construction of a house. From there, the forces continued north to the village of Zif, where they confiscated a prefab intended for agricultural purposes and placed there a few days ago by the landowner, a farmer from Hebron.
Filmed by: Nasser Nawaj'ah, Hamdan Hamdan, Eid Jahalin and Basel al-Adra

On Sunday, 7 November 2021, at around 8:00 A.M., Civil Administration personnel came with a military escort, a bulldozer and a crane truck to Khirbet Um al-Jamal in the northern Jordan Valley. The forces dismantled and confiscated four residential tents intended to house an extended family of 19, including 13 children, and equipment for the construction of three livestock enclosures belonging to the same family.

Israel demolishes home of family of 15, including 7 minors, in the South Hebron Hills

On Wednesday, 3 November 2021, at around 8:00 A.M., Civil Administration personnel came with a military and Border Police escort to the community of al-Jawaya southeast of the town of Yatta in the South Hebron Hills, where they demolished the home of a family of 15, including seven minors, which contained two apartments.

On Monday, 1 November 2021, at around 11:00 A.M., Civil Administration personnel came with a military escort and a bulldozer to the community of ‘Ein al-Meyteh, west of Khirbet al-Malih, near the village of Tayasir in the northern Jordan Valley. The forces demolished three residential tents that were home to a family of nine, including seven minors, two tents used as livestock pens, a tent for storing fodder, a livestock enclosure, a solar panel, and three water tanks. The forces also confiscated the battery of the solar power system and 30 metal poles.