Walls of Batan al-Hawa cry out neglect and dispossession A mural in the “I Witness Silwan” street art project.

For Palestinians, life in Batan al-Hawa is a pressure cooker. The neighborhood, located in Silwan in East Jerusalem, is deliberately neglected by the Israeli authorities, primarily the Jerusalem municipality and suffers overcrowding and a lack of basic public infrastructure needed for everyday life.

To make matters worse, residents live under a constant threat of eviction, as the Israeli authorities, using the Ateret Cohanim settler organization as a proxy, work to evict some 700 Palestinians from their homes in the neighborhood. This campaign, which is fully backed by Israeli courts – including the Supreme Court – relies on disregard for key facts, dubious arguments and flawed legal reasoning.

Fourteen families have been evicted so far. In three recent cases, the Jerusalem Magistrates’ Court approved the eviction of four others: the Shweiki, ‘Odeh, Dweik and a-Rajabi families, which together number 47 people, 14 of them minors. Hundreds of other residents live in constant uncertainty regarding their own and their children’s future and without any real ability to shape their lives as they wish.

The arrival of settlers a few years ago has made life intolerable for Palestinians, who are forced not only to contend with hostile neighbors, but also the inevitable Border Police and armed guards that come with them and consider the Palestinian residents a constant threat, treating them accordingly. Every settler family that moves into the neighborhood reaffirms Israel’s declared policy to drive hundreds of Palestinians out and take over their homes. 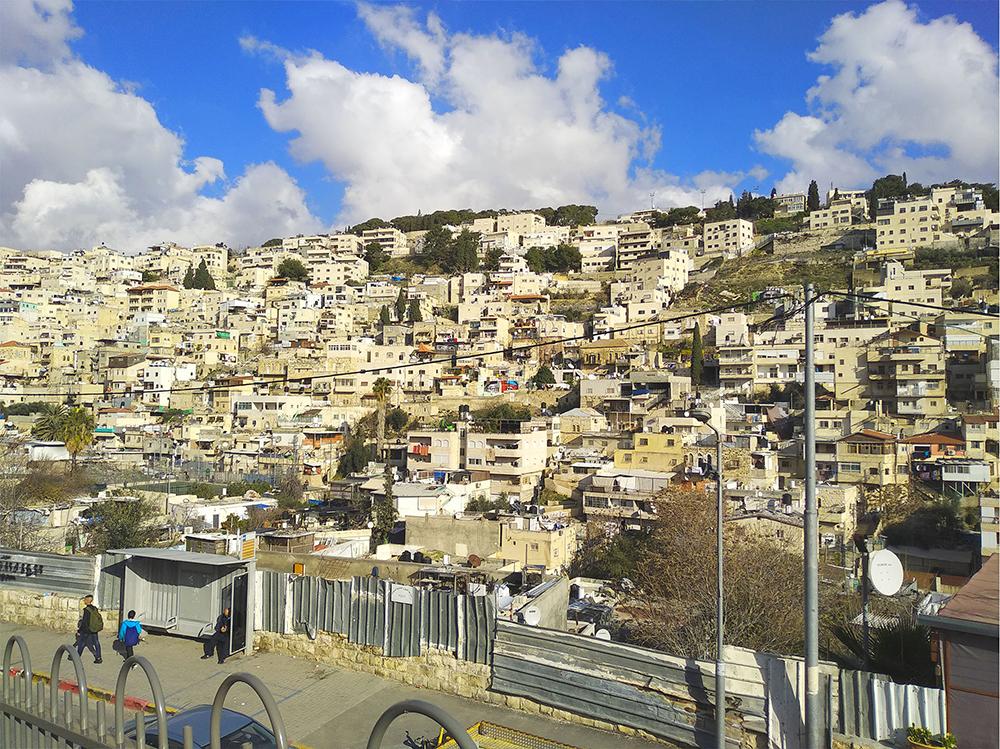 Recent years have seen some 25 settler families taking up residence in Silwan, which is home to about 20,000 Palestinians. Due to an intentional policy of the Jerusalem municipality, the neighborhood suffers from overcrowding, derelict infrastructure and lack of basic services. The neglect is palpable. 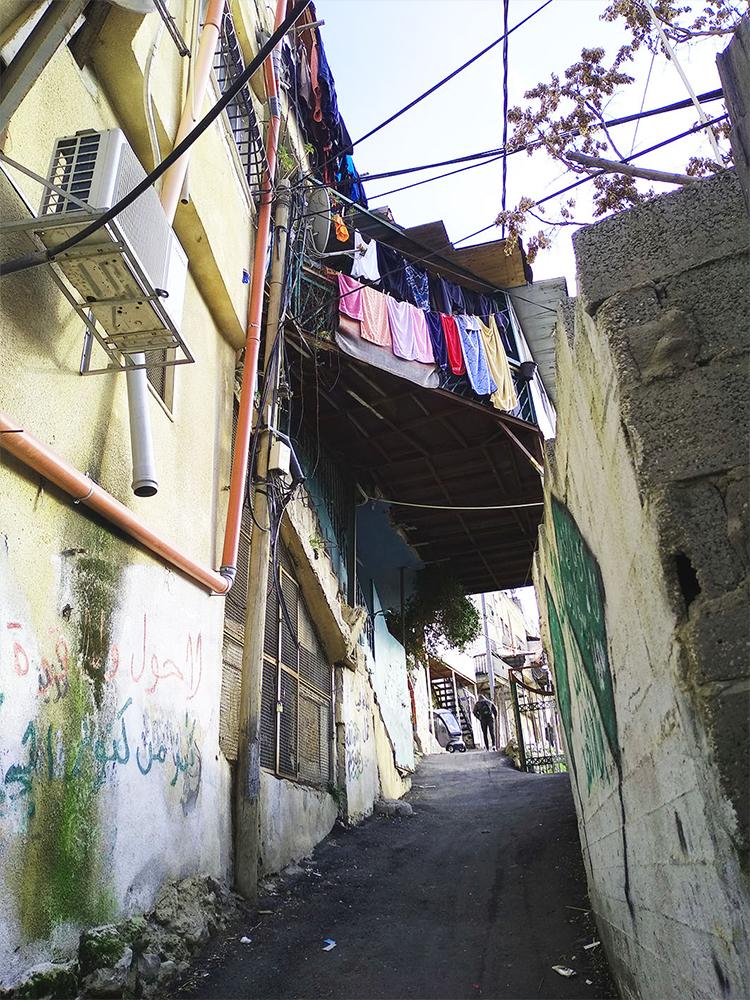 Batan al-Hawa has no sidewalks in. Cars make their way through narrow alleys, manoeuvring back and forth to make room for oncoming traffic. Pedestrians, including young children, have to press into small niches or stairwells that go straight up from the road into their homes. 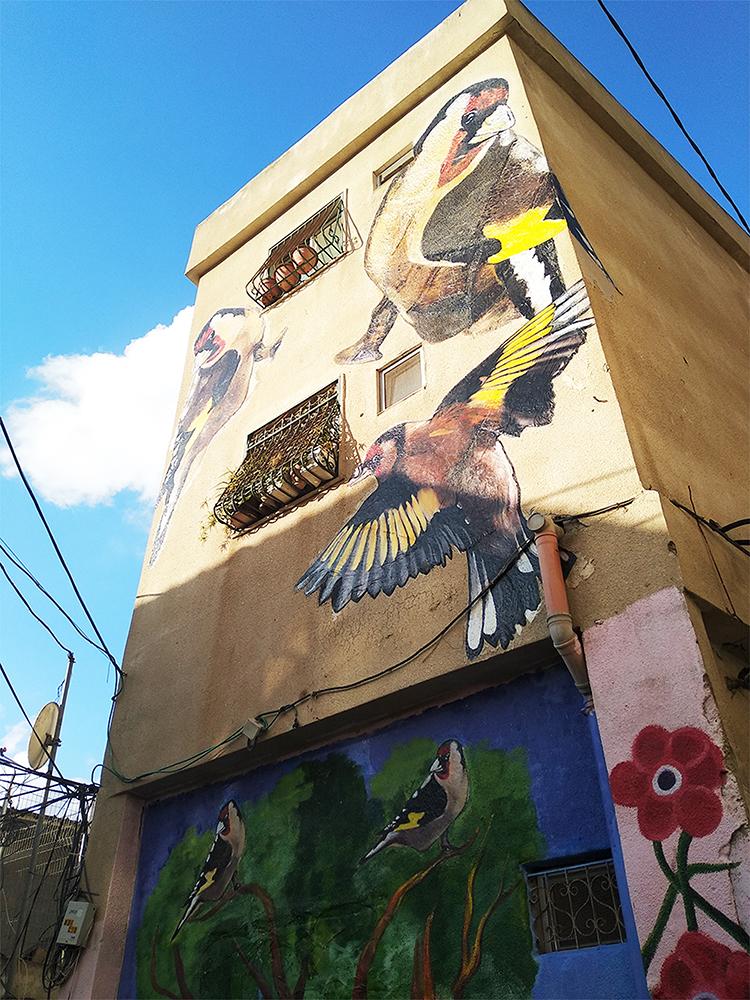 More and more walls in this crowded neglected East Jerusalem neighborhood are covered in huge murals: brightly-colored goldfinches, huddled, or with wings outstretched; piercing eyes with an unsettling gaze; a tree with winding branches that morph into hands reaching up to the heavens. They are part of “I Witness Silwan”, a street art project started by artist Susan Green and neighborhood residents. The project, which at its height is supposed to include 150 murals, is aimed at highlighting the presence of Palestinians and their struggle in Silwan. 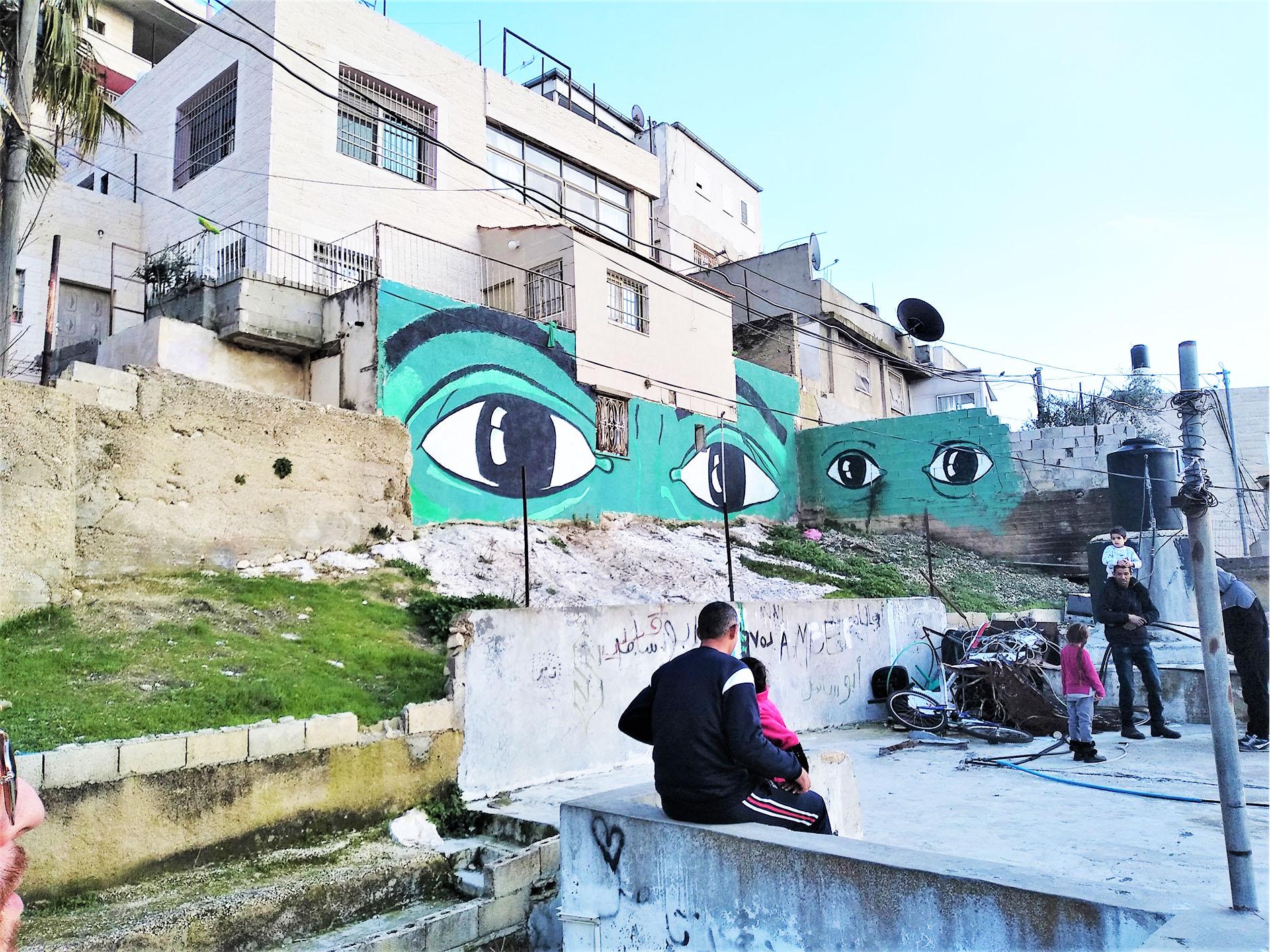 A mural of eyes stares out at West Jerusalem, demanding: Look at us. We are here. The eyes also remind us that the residents are watching our actions. The paintings give voice to the Palestinian residents of Silwan, who are silenced in the municipality, the courts and in Israeli public opinion. 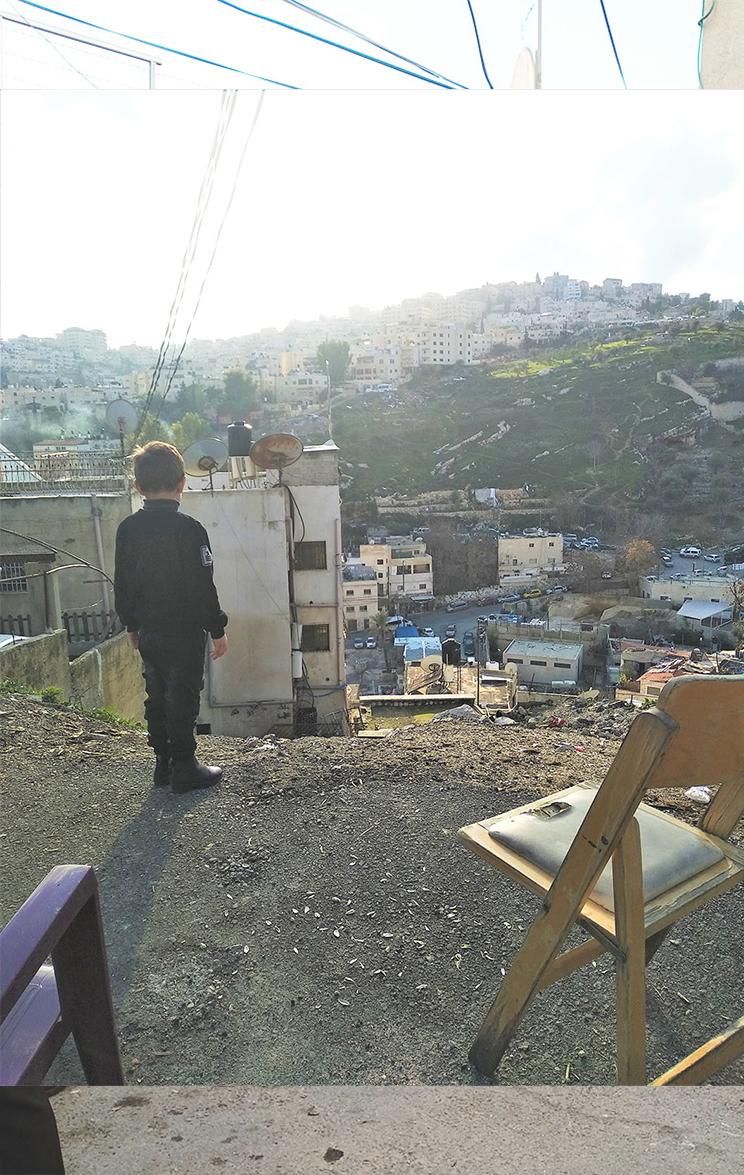 Batan al-Hawa does not have a single playground, park or green spot for families to gather and let the children play freely. The municipality’s intentional lack of investment in the neighborhood is visible, and life there certainly reflects this. 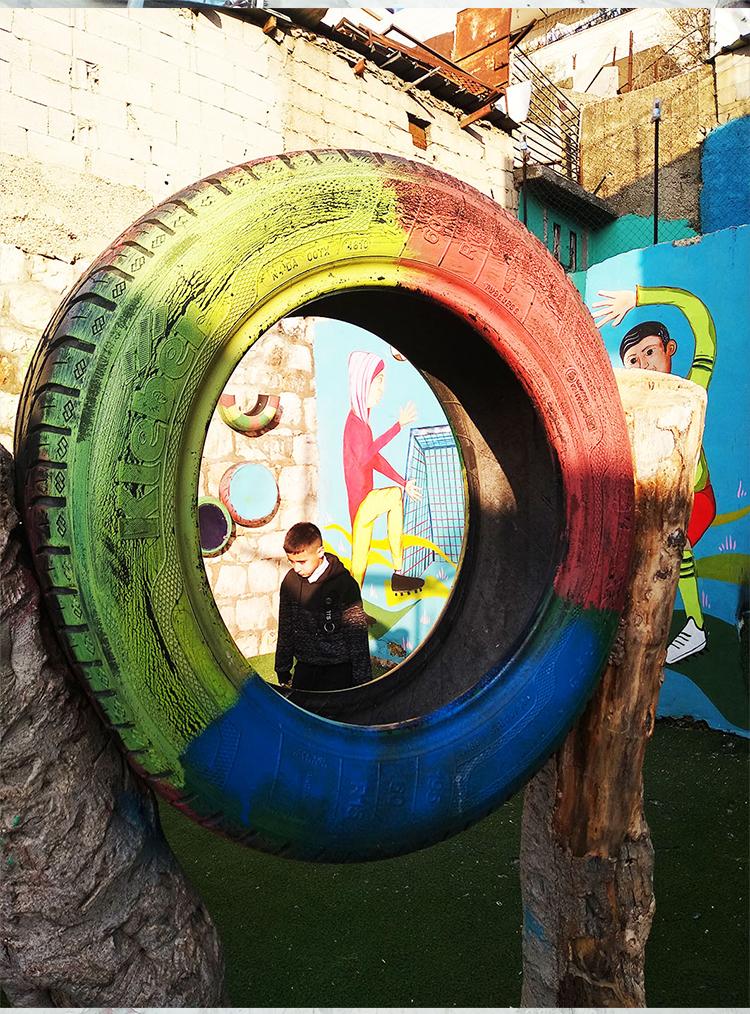 Palestinian neighborhood residents took the initiative and set up a small community center to give children a safe space to play and study. The improvised center offers afterschool classes, computer games, reading and art activities and a tiny soccer field. 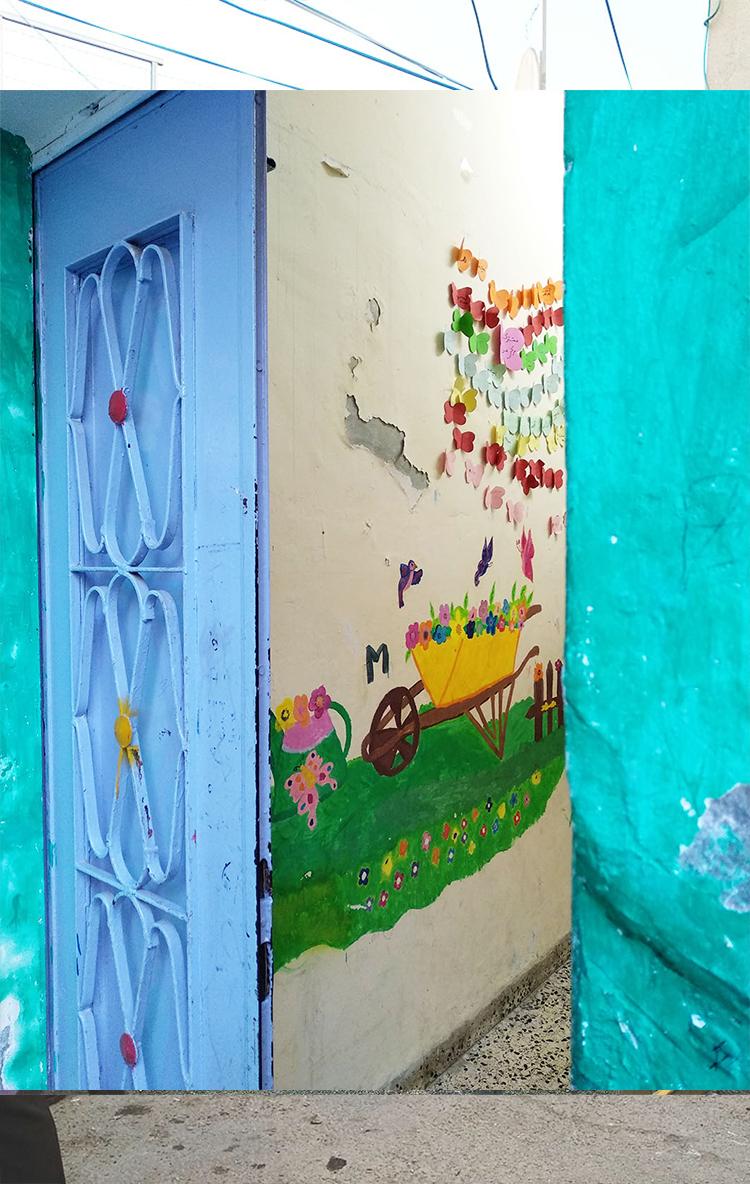 The independent center offers children a rare opportunity to meet friends outside the house, especially on rainy or very hot days. 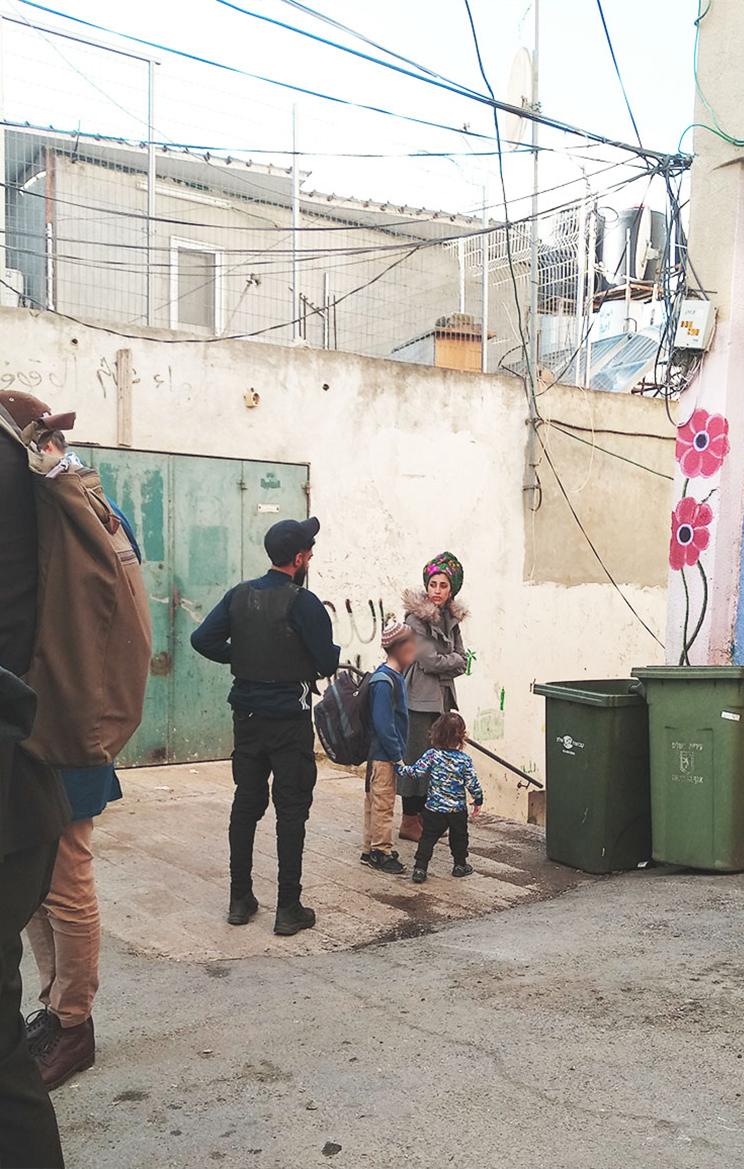 Settler families walk the streets with private security guards financed by the Housing Ministry (read: the Israeli taxpayer). Armed guards are a regular, threatening feature in the neighborhood, constantly reminding Palestinians who has the power. 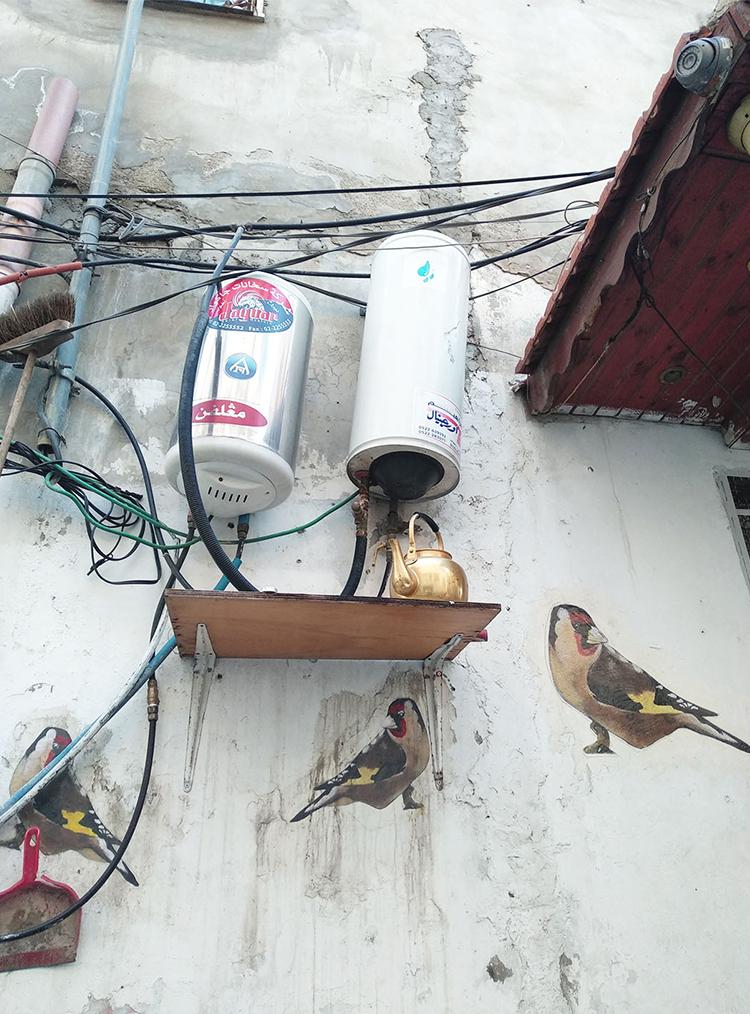 Aesthetics clash with survival, hope for freedom struggles under a policy of suffocation.