No closure in killing of 21 Gaza family members

An op-ed by Jessica Montell, first published in the Jerusalem Post On 4 January 2009, at the start of the ground phase of operation Cast Lead, about 100 members of the extended a-Samuni family were huddled inside one house in the a-Zeitun neighborhood of Gaza City. The next morning, an Israeli airstrike killed 21 people inside the house, including 9 children and 10 women, and injured dozens of other family members. During the next two days, the army refused access to medical teams, in spite of being informed of the terrible outcome by family members who managed to escape the bombed home and human rights and humanitarian organizations, including B'Tselem. When medics managed to get to site, they found four small children next to their dead mothers in one of the houses, and evacuated several wounded people. The army refused permission to evacuate the bodies and they remained in the rubble for a further two weeks.

These chilling facts are not in dispute. Yet last week the Military Advocate General (MAG) of the Israeli military informed B'Tselem that he decided to close the Military Police investigation into this incident without taking any measures. According to the MAG, there are no grounds for criminal or disciplinary measures against any of those involved in the shelling of the a-Samuni house. A "command sanction" was imposed on the Givati Brigade Commander, preventing him from future promotion to a command position in an operational environment. The military's response does not detail the findings of the investigation, nor does it provide the reasons behind the decision to close the file. Contrary to several coherent accounts given separately, in real time, by surviving a-Samuni family members, the MAG found "no grounds to the allegation that IDF forces directed civilians to gather in the house which was later struck", but did not explain why he completely disregarded their credible testimonies.

By way of explaining this decision, the MAG Corps website states that the investigation disproved the allegations that strikes were directly and intentionally aimed at uninvolved civilians. The MAG's statement also ruled out recklessness regarding possible harm to civilians, or criminal negligence, noting the serious challenges and complex operational circumstances of the Gaza operation. However, the laconic response does not begin to provide satisfactory answers – neither an explanation for the past, nor an assurance that lessons have been learned to prevent such a tragedy in the future.

In fact B'Tselem never alleged that this was a case of willful killing, but this is far from the only standard against which to judge our military's behavior. The military is also obligated to take all feasible precautions to avoid harm to the civilian population. Was this the case in the a-Samuni incident? Such is the implication of the MAG's response – yet it is a very difficult conclusion to reconcile with all the facts of the case. The lack of accountability for the a-Samuni family is no aberration. Some fifty military police investigations were opened into harm to Palestinian civilians in Operation Cast Lead, yet the overwhelming majority appear to be gathering dust. The MAG Corps has created a haze around these investigations, preventing any possibility of examining their effectiveness. It appears that three indictments have been filed against soldiers who took part in Cast Lead: for theft of a credit card from a Palestinian civilian, for use of a nine-year-old Palestinian child as a human shield, and for “manslaughter of an anonymous person.” In three other cases, disciplinary action alone was taken. The fate of the rest of the cases is entirely unclear.

There has never been an investigation meeting international standards into the suspicions raised by B'Tselem and other organizations regarding breaches of international humanitarian law by the military during the operation. Most of B'Tselem’s demands for investigation were not met. The investigations that were opened did not, to B'Tselem's knowledge, address issues of policy, but rather focused on the individual incidents. The a-Samuni case only illustrates the broader problem regarding the military's ability to examine itself. Shirking responsibility for the deaths of hundreds of civilians and the widespread devastation caused by operation Cast Lead demonstrates yet again the need for an Israeli investigation mechanism that is external to the army.

Over three years later, the scars have barely begun to heal for the a-Samuni family. I cannot even imagine the traumas this family endured and the challenge of rebuilding their lives after this horrific tragedy. It is intolerable that we as a society can treat this incident as a sad but inevitable part of military operations. The a-Samuni family deserves answers and Israeli society deserves them as well. 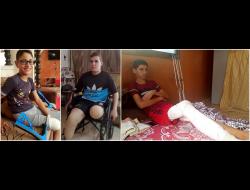