In early June 2013, B'Tselem field researchers documented conditions at Tarqumya Checkpoint in the southern West Bank and at Eyal Crossing in the northern West Bank, both of which serve as entry points into Israel for Palestinians who have permits to work in the country. The researchers followed the situation there from the middle of the night, when the first laborers gather in line, until the morning.

B'Tselem reported these findings to the head of the Land Crossings Authority at the Ministry of Defense. The assistant to the head of the authority, Ms. Lia Moran-Gilad, rejected the claims that laborers must wait a long time in line, stating that the first laborers usually arrive at Tarqumya Checkpoint only 15 to 30 minutes before its scheduled 3:45 A.M. opening, and only few people arrive even then. Moran-Gilad added that there on no people at the Eyal Crossing when it opens at 4:00 A.M. She also noted that the Lands Crossing Authority is currently considering opening another inspection lane at Tarqumya Checkpoint, and that such an expansion is currently under construction at Eyal Crossing.

On 1 September 2013, B'Tselem's field researchers returned to Tarqumya Checkpoint and reviewed conditions there. They also went to Sha'ar Efrayim Checkpoint in the northern West Bank. They found that Palestinian workers in both locations are facing the same difficulties documented three months earlier:

The Ministry of Defense must modify conditions at checkpoints to accommodate the number of Palestinians issued work entry permits by the Civil Administration. It must also ensure that the process of entry to Israel safeguard the dignity of the workers. The matter is especially urgent now, with winter approaching, as the long lines extend far beyond the roofed area of the checkpoints.

More on workers from the Territories 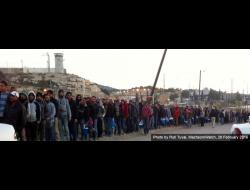 Israel revokes permits of 20 members of one family, leaving them jobless for nearly three months and counting
