Testimony: Soldiers fire at ‘Abd al-Hadi al-Kafarneh, wounding him when he aided in the evacuation of a person who had been shot near Gaza perimeter fence, 19 June 2010

On Saturday, 19 June 2010, at 6:30 A.M., I began collecting gravel in the industrial area next to Erez Crossing. I managed to gather about half a ton of gravel. There were lots of workers and the situation was calm. It was the first day I worked at collecting gravel.

Around 7:30 A.M., I heard gunfire from the military post next to the border fence. I was 700 meters from the border, because I knew it was forbidden to go within 300 meters of the border and that the army had fired at lots of people who had come close to the border.

After the shooting began, I saw people fleeing and shouting “ambulance, ambulance.” I realized somebody had been injured. Other men and I went to look for the person who had been wounded. I walked about 200-300 meters toward the fence, where I found a person lying on the ground. I saw that he was a member of the Abu Harbid family. His stomach and thigh were bleeding. A few of the other men and I lifted him up and put him on a cart.

The shooting stopped. We moved forward a few meters with the wagon, and then the firing from the army post began again, hitting a donkey and killing it. We picked the wounded man up again and put him on a motorcycle that was passing. The motorcycle drove off, and we remained there.

I started on my way back to where I worked because I had left the gravel I had collected and my tools there. When I wasn't far from the road, suddenly, without warning, I was hit by a shot in my right shin. I held up my wounded leg and hopped on my left leg. The soldiers continued to fire into the same area and from behind me.

After a few meters, I reached some relatives of mine who were also collecting gravel, and they helped me. They tied my wounded leg and took me by ambulance to Kamal ‘Adwan Hospital, in Beit Lahiya. I remained hospitalized for three days.

I was injured on my first day working collecting gravel, and I won't do that work anymore.

'Abd al-Hadi Faraj 'Abd al-Hadi al-Kafarneh, 19, is a laborer and a resident of Beit Hanun, Gaza Strip. His testimony was given to Khaled al-'Azayzeh on 6 July 2010 at the witness's house.
/> 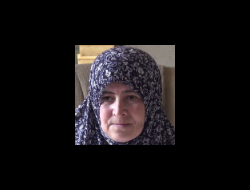 Testimony of Basmah Mansur, 48, who was shot in the face on 12 February 2004 while inside her home in Nablus