Since I completed high school,  I wanted to study at Bethlehem University because I heard it was a good university with a high academic level. In 2005, I was accepted as a business-administration student there.

In August 2005, I submitted, via the Palestinian liaison office, a request to obtain a permit to enter the West Bank, but it was rejected. The request that the university submitted for me was rejected as well. I tried again, with the help of the church in Gaza, and this time I got it. I was happy that I could fulfill this dream./>/>

Along with some girlfriends, I rented an apartment in Bethlehem and started my studies. I went to Ramallah a lot, passing through the Container checkpoint without any trouble. I was living a normal life, viewed the West Bank as my home, and didn't encounter any special problems. I would go to pray at the church in Bethlehem.

On 28 October 2009, a Wednesday, around one o'clock in the afternoon, I was returning by taxi from Ramallah to Bethlehem. At the Container checkpoint, soldiers stopped the taxi and asked for our identity cards. When the soldier saw I was from Gaza, he told me to get out and sit on an iron bench on the side of the checkpoint. I remained there until seven o'clock, without access to water, food, or a bathroom. The checkpoint is on a mountain and is exposed, so it was very cold.

Around eight o'clock, a female soldier blindfolded me, cuffed my hands in front, and took me to a jeep. She said the jeep was going to Etzion. After a short while, I was moved to another jeep. Around 11:30, the female soldier removed me from the jeep. When she removed the blindfold, I saw I was at the Erez checkpoint. I was in shock when I realized where I was. It was dark when I left the checkpoint, I was afraid because I was alone. I walked one kilometer until I got to the Palestinian side, where my mother and father were waiting for me.

I began to cry and was angry about what had happened, especially since I was almost finished with my studies. The graduation ceremony is in December. I had only two more months to go. During my entire four-year period at the university, I had never been arrested or detained, and never had any problem.

Now, I feel that I have no hope for the future. I had dreamed of completing my studies and working, but now I find myself without a degree and without work. I am still hoping to return to the university and complete my studies, and then return to my family in Gaza, like every other student who studies at a university abroad.

Berlanti Jaris Boulus ‘Azzam, 22, a student, is a resident of Gaza, She gave her testimony to Muhammad Sabah at her home in Gaza on 8 November 2009 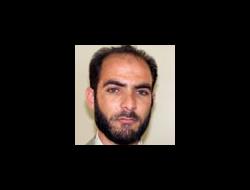