Testimony: Police arrest Lu'ai a-Rajabi, 13, and beat and abuse him in attempt to get him to collaborate, Jan. '09

I live in Silwan with my mother and four brothers and sisters. My father is in jail. I am in the sixth grade at the orphan's school in a-Tur.

In November last year, an officer from the Shabak named Guy, who is in charge of our area, came to our house together with police to arrest me. I wasn't at home at the time, and they left a summons saying I had to go to the Russian Compound [Jerusalem Police headquarters] and meet with an investigator named Itzik. I know him from the neighborhood.

On Sunday I went with my mother to the police station. We waited outside. They didn't take us into the interrogation room, and after waiting for two hours, my mother decided we wouldn't wait any longer, and we left.

About two weeks later, around 3:00 A.M., Captain Guy came to our house, with some officers. They came to arrest me. My mother and uncles asked them to let me go to the police station on my own the next day, and they agreed.

The next day, I went with my mother to the Russian Compound. We waited a long time and then finally a Shabak agent, in civilian clothes, came and told me to go with him to the interrogation room. I cried and asked for my mother to come with me, but he wouldn't let her. I was shaking with fear and barely managed to walk with him. I was afraid they would beat me. He took me into a room where the investigator Itzik was sitting. Itzik told me to sit opposite him, and he then questioned me about throwing stones in the Bustan section of Silwan. I told him I wasn't there at all, but he didn't believe me. He asked me who threw stones, and I told him again that I wasn't there, and that I was with my mother all the time. He asked me to work with him. I asked him, “Work at what?” “As a collaborator He said he would give me money. I told him that I don't want to work with him, and, in any case, I had to ask my uncles. I was in the interrogation room about three hours. When he finished, he told me to go, and I went home with my mother. That evening the interrogator Itzik called my mother and asked her to bring me again the next day. The next day, I went to meet with him, instead of going to school. He took my fingerprints and released me.

Last Monday [12 January 2009], around 2:00 A.M., I woke up to the sound of banging on the door. I was frightened. My mother and little sister screamed and cried. Suddenly, my room was filled with masked police, in black clothing. I was so scared that I cried. One of the policemen took off his mask. He was fair-skinned. I think he was Russian. He wiped the tears from my eyes and said, “Don't be afraid.” He took me from the room and I put on my shoes. Police walked in front of me and behind me. One of them pushed me hard with his weapon. I shouted and called to my mother. They took me outside, to the road. One of them hit me hard in the neck and told me to lower my head.

We got to a Border Police jeep, and they put me inside. One policeman sat next to me, and two sat in the front seat. The policeman next to me swore at me. During the ride, I was stuck in my seat and shook from fear. After a few minutes, we got to the Da'ud Park parking lot. The policemen took me out of the jeep and put a black mask on my face. I couldn't see anything, but I managed to see flashes of light and realized they were taking my picture. They put me back into the jeep, removed the mask, and took me to the Russian Compound.

I remained like that until noon, when Husam came and told me to put on my shoes. He took me to an older person, who had grey hair. He had a skullcap and was wearing a white shirt and dungarees. He was tall and thin. He took me to a white car, a Skoda. Itzik drove. My brother, Suhaib, was inside. They sat me down next to him, and the older man sat with us. We drove a short distance to the court. I couldn't control myself any longer, and I asked the older man to let me go to the bathroom. He let me. When we went into the bathroom, he told me, in Arabic, “I'll screw you and you mother and your whole family.” He told me to keep the door open while urinating. I was very embarrassed, but I had to pee. Then he took me to the courtroom. The judge decided to release me on bond.

They took me back to the Russian Compound and to the same place where I had been before, but this time without handcuffs. I remained there until 8:00 P.M. without anything to eat or drink, even though I asked the interrogator Husam twice to being me something to eat. He said there wasn't any food.

Around 8:00, my uncle Usama a-Rajabi signed the bond and took me home, where I had something to eat. I was starving. I was under house arrest for two days.

Lu'ai Sami Khader a-Rajabi, 13, is a student and a resident of Silwan, in East Jerusalem. Him testimony was given to Kareem Jubran at the witness's house on 18 February 2009. 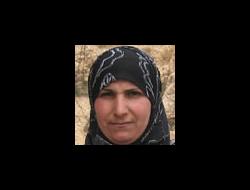