I live in Kafr Qalil, which is situated southeast of Nablus . For twenty years, I have been working in Israel as a plasterer. Since the intifada broke out, I have not been able to get a permit to enter Israel . They said I was denied a permit for security reasons. I have had to make do with odd jobs now and then at very low wages to support my family and feed my children. I have not been able to find a permanent job because the economic situation is horrible. I am at the stage that I don't have money to buy food for my family. I have large debts at the grocery store and the green grocer's, and I haven't paid the water and electricity bills since the beginning of the intifada.

Fourteen months ago I again tried to get a permit to enter Israel . My request was approved and I received a permit for one month. It was renewed twice, each time for three months. Then my request was denied, for security reasons they said. I was left with no choice. I had to enter Israel without a permit so I could work. I heard about lots of workers inside the Green Line who didn't have permits and were chased and detained by the police, but I was in despair. I went with a group of workers who also didn't manage to get permits. I worked ten or sixteen days without a day off. Most nights, I slept in the houses I was working on. I was lucky, as most of the workers had to sleep outdoors, in the bushes.

On Saturday, the 25 th of November, around 8:30 in the evening, I was walking on the side of the road near Geha, next to the site where I was working, and a white civilian vehicle stopped alongside me. Two police officers dressed in special green uniforms were inside. One of them asked me, "Where are you from?" I told him I was from Nablus . He got out, holding a wooden club. I realized he intended to beat me, so I ran. The driver drove the car up to me and blocked my way. I took out my ID card and handed it to him. The policeman with the club took the card and threw it into the car without looking at it. The driver picked up the club and tried to hit me in the head, but I pushed it aside with my right hand. The other soldier hit me in the hand with his club. He hit me five times, and I used my hands to protect my head. The blows were very hard and painful. I was afraid of being hit in the head. I thought I was about to die or become disabled .

Suddenly, I heard shouting in Hebrew. I saw a civilian car stop and a person ask the policemen to stop beating me. The two policemen left. The guy got out of the car and asked me, in Hebrew, "What did you steal?" I said that I didn't steal anything, and that he could look at the plastic bag I had, which contained my work clothes. "Why did they beat you?" I said that I didn't know, and that they didn't even look at my ID card or ask to see my permit. He asked, "How can I help you?" I told him that I had to get to the hospital, because my hand really hurt. He took me to Beilinson Hospital , a trip that took twenty minutes. They X-rayed my hands and gave me a shot to kill the pain. The doctor said both my hands had been broken, and he bandaged them. Hospital security personnel asked me what happened, and I told them. Because I didn't have an ID card, they asked me to leave the hospital.

Around one in the morning, I left the hospital and went to the apartment were I was working and living. I couldn't sleep because of the pain. At 7:00 in the morning, I went to the Kafr Qassem checkpoint and then home. I told my family what happened. My brother Nafez, who lives next door to me, took me to Refidiya Hospital , in Nablus , where they X-rayed my hands. They said I had two broken bones in my right hand, one break in the left hand, and contusions. The doctor put a cast on both of my hands. He said I had to rest for at least six weeks because two of the joints had been broken. He gave me pain killers.

The pain is still terrible today, 11 days after the event, and I can't sleep. I can't do anything by myself and need help all the time - people feed me and help me drink, dress me, wash my face. This is hard on me, because I feel as if I am a hardship for my wife and children. Even when I go to sleep, I need someone to cover me and help me get out of bed.

I don't know why the policemen treated me as they did. I didn't do anything to them. They didn't even check if I had a permit. They beat me mercilessly.

I remember them very well. The first one was tall, full-bodied, chubby, light-complexioned, and had blue eyes. The other one was also tall and full-bodied, but he had a dark-brown complexion. The heads of both were shaven. I wanted to know who the guy was who rescued me so that I could thank him. If he hadn't come, I don't know what they would have done to me.

Yasser Fathi Ahmad Ahmad, 38, married with seven children, is a construction worker, and a resident of Kafr Qalil, Nablus District. His testimony was given to Salma a-Deb'i, at the witness's home on 6 December 2006. 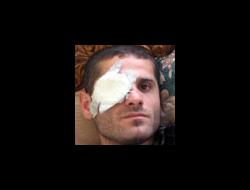