In the beginning of 2002, the Israeli army blocked, with piles of rock and dirt, the road that connects al-Jib to road 463 and to al-Khalayleh neighborhood. The road block has almost completely disconnected the neighborhood from the town. In 2005, the army removed the piles of rock and dirt and placed instead an iron gate manned by border police on a permanent basis.

In the start of 2006, a border police force arrived in the neighborhood, encircled the village, and conducted a population census. Following the census, lists of all the residents who had been surveyed was prepared. These lists were then given to the policemen manning the iron gate. Only those whose names were on the list were able to pass between al-Khalayleh and the other parts of al-Jib, and only by foot.

The restrictions on movement to reach the rest of the village cause us a lot of difficulty and suffering. We are very tightly tied to the village; we buy everything we need and receive all our services from there. Today, it is difficult to carry what we have bought to our house. We need to get the products to the gate, and after the police inspection we pass to the other side, then we need to walk more than a kilometer by foot until we reach the neighborhood. When we have a lot to carry, we have to order a car with an Israeli license plate to transfer us from the gate to the neighborhood, because only Israeli cars can travel on road 436. Basic household expenses have gone up drastically. Gas for cooking, for example, now costs us much more money than before. Instead of moving the gas directly from al-Jib to the neighborhood - a distance of one kilometer - the vehicle that delivers the gas tanks has to take a detour and drive through Bir Nabala, Beit Hanina al-Balad, and Neve Shmuel, and go through the Ramot checkpoint and only then arrive at al-Khalayleh. This trip increases the price of the gas because delivery expenses have to be covered.

Our passage through the gate to the rest of al-Jib involves difficulties and humiliation, especially at night. The police officers require that the men lift their shirts and oftentimes they require that we take off our pants. We wait for a very long time in line until they let us pass.

Many times the policemen don't even bother to check if our name appears on the list of al-Khalayleh residents and just tell us that it's not on there and that we can't pass. About 2 weeks ago, for example, my mother, Zeinab Ahmad Hassan 'Amar, who is 70 years old, got to the gate around six o'clock in the evening. The policeman at the gate told her that her name was not on the list. My mother told him that her name was on the list and that she needed to pass through to get home. After an argument that lasted more than half an hour, and after she insisted on passing, the soldier looked through the list and "discovered" that her name was on there and let her pass.

Another problem that we suffer from is our children's access to school. I have four daughters: Zeinab (13 years old), Mariam (12 years old), Hind (11 years old), and Shams (6 years old). They all used to go to the school in al-Jib, but since the gate was installed and cars were prohibited from passing, they could no longer travel on the school bus to school and back. Every one of us, all the residents of the neighborhood, had to transfer our children to learn in Beit Iksa. We found a bus driver who has a license to travel on road 436, and he takes our children from the neighborhood to the school and back. The ride costs five shekels a day for each child and it is a financial burden on the families, especially on those who have many children. I pay 20 shekels a day for transportation.

Sometimes the authorities don't renew the license for the bus to drive on road 436 and then the driver can only transport the children until Beit Ijza and from there the children have to walk, more than a kilometer, and pass the new settlement Givon. In the past year, the bus did not have a license for three months from March until May.

Our access to medical care has also been hindered. In the village there is a small clinic that supplies basic medical services, but we can only reach it by foot. Whoever cannot walk there, or whoever needs care the clinic can't provide, has to travel to a-Ram or to Ramallah. For this, one has to order a car with a yellow Israeli license plate and travel a roundabout route. Because of all the detours the car has to make, the ride costs around 100 shekels now. Before they closed the passage to al-Jib we could travel directly by taxi, which cost us only five shekels.

The isolation of the neighborhood also severely complicates social relations between the village and the neighborhood. They can't get to us and join in celebrations or occasions of mourning. The example that stands out most was what happened to me during last Ramadan. I couldn't invite my sister, N'ameh Mohammad Alkam, 50 years old, to our breaking of the fast meal even though it is a religious requirement to do so. I couldn't uphold this requirement because my sister is not allowed to pass through the gate and come to my house. She has to take a detour and go by an alternative route next to the Ramot checkpoint. If she is caught, she will be arrested and will have to pay a 500 shekel fine for "passing through a road she is forbidden to pass". This already happened to Mr. Tarek Albis, 30 years old, resident of al-Jib who was caught on road 463 and received a 500 shekel fine.

My personal business has also suffered, because the transfer of merchandise to the store is now much more expensive. Before cutting off the neighborhood, the delivery of building materials cost me 200 shekels and today the price is almost double at 350. My profits have decreased and my financial situation has suffered.

Mohammad Mohammad Mustafa Alkam, 47, married and father of 6, is a resident of al-Khalayleh neighborhood in the village of al-Jib and an owner of a hardware store. His testimony was taken by Kareem Jubran in the witness' store in al-Jib on 12 November 2006. 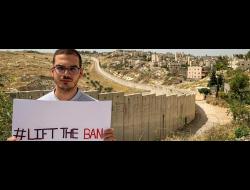