On Saturday, 11 September 2004, after the evening prayers, I went to the olive grove in the Dar Hamed area, west of our village, with my friends; Odah Fayez, who is 17 years-old, Mahdi Mahmud, 20 years-old, and Wissam Abd al-Hakim, 15 years-old. Our village owns land in that area. We wanted to sit and talk to each other. Our village is approximately 40 meters from the road to the 'Ele Zahav settlement. We were sitting about 100 meters away from the first house in the village and two minutes after we sat down, a group of soldiers came out from behind the olive trees which was about 10 or 15 meters away from us. We started running and I noticed two soldiers running after me, but I couldn't identify them because it was dark. I heard one of them yell at us to stop running, but I continued to run towards my village. I heard a bullet hit the rocks on the ground behind me. After 30 meters the two soldiers grabbed me. One of them grabbed my right arm and twisted it backwards while the other soldier beat me with the handle of his rifle on my left elbow, which was very painful. I felt weak. I pushed the soldier that grabbed my arm and I managed to free myself from him. I started running toward my village, and they ran after me.

I heard them yell in Hebrew and in Arabic "Stop, stop or we will shoot you," but I continued to run. While they where chasing me I heard bullets hitting the ground, but I couldn't hear the trigger being pulled or the bullet firing out of the rifle. Maybe they used a gun silencer. They fired around six bullets but I am not sure exactly. I managed to distance myself from the soldiers and after 100 meters or so they stopped chasing me. I kept running until I got home. I went into my house, changed my clothes and tried to sleep. I could fall asleep since my arm hurt and I did not know what had happened with the rest of my friends.

The next morning at around 8:30 AM, I went to a natural healer that lives in the center of my village. She told me that my arm is fractured and I should go to the hospital.

At about 12:00 PM, I reached the Salfit medical center. They took an x-ray of my arm and it turned out I had two fractures in my left elbow. I was transferred to the a-Shiekh Zaid hospital in Ramallah and got there at 13:00 PM. Another x-ray was taken and they put me in a cast from the palm of my hand to my elbow. Later that day I was released and told to come back in two weeks for a checkup.

The day after the event, I found out that Wissam was caught and beaten by the soldiers and they broke his leg. That night he hid behind a carob tree until the next morning.

Shadi Saker Muamad Ahmwd a-Dik, 16 year-old, single, unemployed, is a resident of a-Dik in Salfit district. The testimony was taken by Iyad Hadad at the witness' home on 19 September 2004 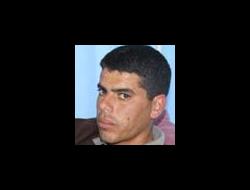