IDF soldiers beat Palestinian and delay civilians for hours in the sun at Tel Checkpoint, May 2003

I live in the village of Tell, about five kilometers south-west of Nablus. I work as a freelance reporter for an Israeli Hebrew-language newspaper. As part of my job I have to go from Tell to Nablus to cover events that happen there.

On Wednesday 28 May, around 8:30 AM, I left Tell to go to Nablus. The roadblock at the exit of the village is open every day from early morning until the evening. On the western side of the road that connects Tell and Nablus, there's a unfinished building that is meant to be a shed for livestock.

I reached the checkpoint at around 9:15 AM. Eight soldiers were inside the building and two more were standing in the middle of the road. When I was about thirty meters away from them, they pointed their guns at me and ordered me to stop. They told me to lift up my shirt and turn around. Then they ordered me to go over to the soldiers that were sitting inside the building.

The soldiers at the checkpoint kept sending more people over to the building, until there were about seventy people who were being held there. We stayed there until 11:00 AM. Then the soldiers started giving the elderly people and some of the women their IDs back and told them to go back to where they had come from. Three women remained, together with two children around 6 or 7 years-old, and about twenty-five men, all under the age of 40.

When I had been there for about three hours, one of the soldiers came out of the building and picked me. He told me to stand up and approach him. He grabbed me by the shirt collar from behind and made me bend over. All this despite the fact that I hadn't moved or done anything. He then proceeded to drag me into to building. Inside, four soldiers came up to me and began kicking me all over my body until I fell to the floor. One of the soldiers drew his knife, which was about thirty centimers long, and put it first to my stomach and then to my throat.

Those sitting outside cannot see what is going on inside the building. The soldiers threatened to kill me and pointed their weapons at me. This continued for about fifteen minutes. I spoke to them in English and asked: "Why are you doing this to me? What did I do to you?" The soldiers told me to shut up. They continued pointing their weapons at me and frightening me. After about fifteen minutes, they ordered me to go outside and to sit in the sun with the rest of those being held there. Others were taken into the building after I was sent out. All of us were very thirsty. When we asked for water, the soldiers would not give it to us.

We stayed at the checkpoint until 3:00 PM, and then the soldier began giving us back our ID cards. One of the soldiers called us one at a time and gave us back our IDs by throwing them into the air and kicking them in our direction. 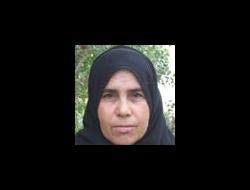 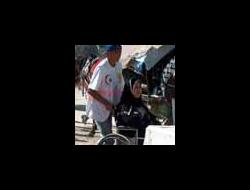