Last Saturday, 26 October 2013, at around 6:30 A.M., the Na’asan family of the village of al-Mughayir, Ramallah District, went to harvest their olives. The Adei Ad illegal settlement outpost was built near the Na’asans’ olive grove. At around 8:00 A.M., several masked settlers arrived at the grove and began attacking the family with stones. The family responded by throwing stones back. The settlers then assaulted 75-year-old Ghatib Na’asan and his nephew, Yasser Na’asan, who tried to protect him. The latter, a volunteer in B'Tselem's camera distribution project, was hit with an iron bar and broken glass. His head and hand were injured and his camera broken. When Ghatib Na’asan tried to flee in his car, stones were thrown at him; the car’s windshield was shattered. Meanwhile, other family members called for the Israeli security forces, who arrived only after the settlers had set out to return to the outpost. The soldiers made no attempt to apprehend the settlers or to detain them until police arrived.

Pursuant to this violent attack, B'Tselem reiterated the need to protect Palestinian farmers from attacks by settlers. B'Tselem Director Jessica Montell said today: "It is the duty of the military, which is fully responsible for the said area, to prevent this absurd situation whereby farmers cannot harvest their olives for fear of being attacked by settlers, who are living there in contravention of international and Israeli law". During the assault on Yasser, other members of the Na’asan family backed away from the area and alerted Israeli security forces. The soldiers arrived at around 8:20 A.M., when the settlers were already on their way back to the outpost, taking with them two sacks of olives belonging to the Na’asan family. The soldiers stopped their vehicle close to the settlers but made no attempt to apprehend them or detain them until the police would arrive. At that point, the settlers abandoned the sacks and continued to the outpost. Later that day, the Na’asans retrieved the sacks.

At around 8:45 A.M., police officers arrived at the grove. They gathered testimonies and photographed the wounded Yasser and the damage to Ghatib's car. Yasser Na’asan was treated at the government hospital in Ramallah and received five stitches to his head and one stitch in his hand. The next day, he went to the Israel Police Sha'ar Binyamin station and filed a complaint against the attackers. He also gave the police the video footage and photographs of the incident. B'Tselem is following the police handling of the complaint.

The Na’asans’ grove is located near the illegal settlement outpost of Adei Ad. Since 2008, B'Tselem has documented four other incidents in which farmers of the Na’asan family were harmed by settlers. In one case, settlers were filmed stealing olives from the family's grove, and an indictment was subsequently filed. In the three other cases, the investigation was closed (in two of them, Israeli human rights organizations B'Tselem and Yesh Din filed appeals). In March 2013, B'Tselem documented settlers attacking a shepherd of the Na’asan family. This time too, the investigation was closed. B'Tselem has requested the investigation material of the incident in order to appeal the decision to close the case.

Before the olive harvest began this year, B'Tselem and other human rights organizations applied to OC Central Command and to the Legal Advisor in Judea and Samaria demanding that security forces be deployed in areas in the West Bank where recent years have seen repeated settler attacks against Palestinian farmers and their property. The organizations specifically mentioned the villages that lie north-east of Ramallah – from south of the Adei Ad outpost to the Shilo settlement – as warranting protective attention. As the occupying power in the West Bank, it is Israel's duty to protect Palestinians there from violence by perpetrated by settlers. In places where there are recurrent attacks, Israeli forces must step up their presence to prevent attacks. This is especially relevant during the olive harvest, when such incidents are more frequent. Security authorities must also prohibit settlers from coming to Palestinian communities or their farmlands. Palestinians' freedom of movement must not be curtailed as a preemptive measure to prevent settler violence.

The fulfillment of these obligations, particularly deployment and actions designed to preempt violence, entails the use of manpower and other resources. Yet, as long as Israel continues to enable and encourage state the establishment of settlements, in contravention of international law, it must allocate the necessary resources and safeguard the Palestinians who constitute the protected population of an occupied territory. The military must not reconcile itself to a reality in which the presence of settlers constantly endangers Palestinians’ safety and livelihood. 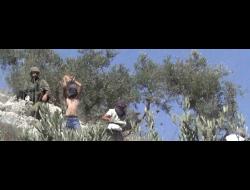