The indictment concerns an incident that occurred on 17 April 2007, in which Palestinian children from the village of Tuqu’, south of Bethlehem, were throwing stones at Israeli vehicles travelling along Route 356. The children were on a hill overlooking the road, which passes near their village. According to testimonies taken by B’Tselem, the driver of one car at which stones were being thrown stopped his car, got out and fired three bullets at the children on the hill. The children fled from the shooter, who began climbing up a path leading to the hill and fired at them again. Haitham Abu Mfareh, 13 years old, was hit: he sustained skull fractures and intra-cerebral hemorrhaging, which paralyzed the left side of his body and caused epilepsy. Today, nearly six years after the incident and after a lengthy course of rehabilitation, Abu Mfareh has a permanent partial disability in his left arm and leg and suffers from epilepsy seizures. He cannot lift heavy objects with his left hand, his left leg is lame and his ability to walk is restricted.

Following the incident, the Samaria and Judea District Police launched an investigation of it. B’Tselem conducted an inquiry into the incident and conveyed its findings to the police. More than two years after the incident, in response to B’Tselem’s request for an update, the Samaria and Judea District Police stated that “suspects have not yet been identified.” On 14 August 2009, B’Tselem was notified by Adv. Ghada Halihal of the law office of Adv. Lea Tsemel – Abu Mfareh’s legal counsel before the Committee for Ex Gratia Compensation for Ideologically Motivated Attacks – that the case had been closed on the grounds of “assailant unknown.” This decision was confirmed in official police replies to B’Tselem.

According to media reports, there was a breakthrough in the investigation at the end of 2009 when new intelligence obtained by the Samaria and Judea District Police led to the arrest of a Nokdim resident who allegedly shot Abu Mfareh. Following his arrest, the case was reopened.

A case such as this, in which a police investigation of settler-perpetrated violence against a Palestinian ends in a court indictment, is highly unusual. From the beginning of the second intifada in September 2000 and through December 2011, B’Tselem contacted the Israel Police concerning 352 incidents of settler-perpetrated violence against Palestinians or their property, inquiring whether investigations had been opened in these incidents and what the current status is in investigations that had been opened. Insofar as is known to B’Tselem, in 71 percent of the cases, an investigation was opened; in about 23 percent, no investigation was opened; in 6 percent no response was received or the request could not be located. An indictment was filed in only 11 percent of all cases in which investigations were opened. 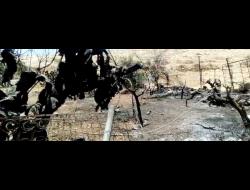