Israel to establish waste-to-energy plant in the settlement of Ma’ale Adumim, unlawfully exploiting Palestinian territory for its own needs

Israel to establish a waste-to-energy plant in the settlement of Ma’ale Adumim, unlawfully exploiting Palestinian territory for its own needs. In October 2019, the Israeli government issued a tender for the establishment of its first waste-to-energy plant, at an estimated cost of 1 billion NIS (about 284 million USD). While this may seem an ecologically positive development, the plant is set to be built within the West Bank, despite the prohibition in international law on exploiting resources in an occupied territory for the benefit of the occupying power. If established, the plant will be built without taking the Palestinian population of the West Bank and its views on the matter into account.

The site for the plant lies between East Jerusalem and the Dead Sea, some 700 meters east of the Mishor Adumim industrial park near the Good Samaritan site and within the municipal jurisdiction of the settlement of Ma’ale Adumim. Israel expropriated this land back in 1975. Like all Israeli settlements in the West bank, Ma’ale Adumim is illegal under international law. Several hundred meters away from the site there are small, isolated Palestinian shepherd communities. The project is the initiative of the Ma’ale Adummim Planning and Development Corporation. Settlement mayor Benny Kashriel argues that it will serve “major parts of Israel” and should therefore become “a national project”. Indeed, the Ministry of Environmental Protection has included the facility in its 2030 strategic plan for treatment of urban waste.

The plant is set to open in 2025 and to serve Israeli authorities within the metropolitan area of Jerusalem. It is expected  to reduce the transfer of waste to landfills – the most common form of waste treatment in Israel and in the West Bank – as well as increase waste recycling by 2.5 and transform some 25% into energy. According to the plans, the plant will span some five hectares and treat enormous quantities ranging from 1,000 to 1,500 tons of waste a day – including domestic waste, electronic waste and polluted soil. It will contain a sorting facility that can process about 2,000 tons a day. Waste that is found unsuitable for incineration will be sent on to recycling or to a landfill. According to the Ma’ale Adumim municipality, the plant will service local authorities that consist of some 1 million people, including Palestinian authorities, within a 40-km range. The specific authorities have not yet been named, other than the city of Jerusalem and the settlement of Ma’ale Adumim.

In 2019, Israel and the EU signed an agreement as part of the EU’s twinning instrument, which establishes cooperation with the EU’s neighboring countries, guaranteeing Israel approximately 1.5 million euros over the next two years to support the Ministry of Environmental Protection’s implementation of its 2030 strategic plan. In the agreement, Israel committed to creating a legal framework that adopts European practices and standardization for sustainable waste treatment. As in every agreement between the EU and Israel, it contains a territorial clause , that stipulates that it will not apply beyond Israel’s 1967 borders. Yet the EU’s support for the ministry’s strategic plan – which defines the establishment of the plant at Ma’ale Adumim as a goal and presents the exploitation of West Bank land to resolve environmental problems as a matter of course – empties this annex of meaning. By supporting this plan, the EU will be supplying Israel with knowledge and experience that will help deepen its exploitation of Palestinian land resources and bolster the economic status of the Ma’ale Adumim settlement.

For many years, Israel has been taking advantage of its power as occupier to transfer the treatment of waste (including hazardous waste) and sewage from its sovereign territory to the West Bank. To that end, it has created a situation in which environmental legislation in the West Bank is much laxer than inside Israel, conveniently overlooking the long-term impact of environmental hazards on the Palestinian population and on natural resources, and neglecting to prepare future rehabilitation plans. This has created a financial incentive to transfer the treatment of environmental hazards from Israel to the West Bank. The Palestinians who live in the occupied territory are the ones to pay the price for this environmental damage, even though they were never asked their opinion on the matter and although, as a population under occupation, they have no political power and no real ability to resist. 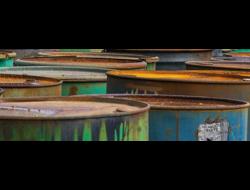 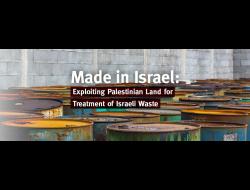 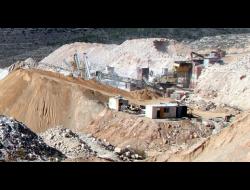