Update: On 11 August 2011, the Israeli High Court of Justice rejected the residents' petition against the proposed route of the Separation Barrier. The court's decision was made in view of several changes Israel made to the route: the barrier at the southern part of the route, which would have isolated the village from the rest of the West Bank, will not be constructed. In addition, the spring will remain on the "Palestinian side" of the village; an underground passage to the village's old cemetery will be paved; and two gates to agricultural land will be constructed, scheduled to be open several hours a day.

The State Attorney's Office informed the High Court of Justice that the Ministry of Defense will suspend work on building the Separation Barrier in the area of the village al-Walajah, in southwest Jerusalem. The announcement, which also stated that Israel intended to expropriate in the near future the land intended for construction of the Barrier, was made in the framework of a petition filed by residents of the village in opposition to the Barrier's route. The separation wall next to houses in the village. Photo: Eyal Hareuveni, B'Tselem, 5 November 2010.

Al-Walajah lies on a ridge south of Refaim Stream. Prior to 1948, the village was located north of the stream, on land later used to establish Moshav Aminadav. In 1948, some residents of the village fled to the village's farmland that remained on the other side of the Green Line, on which the present village was built.  In 1967, Israel's annexation of East Jerusalem included about one-third of the village's land.  Half of the annexed al-Walajah land was expropriated to build the Gilo neighborhood or requisitioned by military order to build the Har Gilo settlement. The village has 2,000 residents, only a minority of whom hold Jerusalem residency. Preventing development of the village

Over the years, the Jerusalem Municipality has not provided services to the village, and city officials' visits to the village have primarily been to document illegal building or to demolish structures that were built without a permit. In the late 1990s, the villagers organized and began to prepare an outline plan for the village that arranges the existing building in the village, enables the construction of public buildings and roads, and preserves its unique agricultural terraces. The villagers took their plan to municipal officials and to the Civil Administration's planning committee, but the planning authorities refrained from dealing with the plan during the second intifada. When the intifada ended, the Jerusalem Municipality refused to discuss the plan on the pretext that the Separation Barrier planned in the area would sever the village from the city. In February 2009, the District Planning and Building Committee issued its final denial of the villagers' plan, contending that the village lies in a green area, on which building is not allowed.

The Separation Barrier in al-Walajah

The route of the Separation Barrier in the area, which runs entirely in the West Bank, has been changed a number of times over the years. The original plan placed the village on the western, “Israeli” side of the Barrier, detaching the village from the Bethlehem Governate, to which the villagers belong and from which they receive their services. A winding route was later established to run around the built-up area of the village, separating it from the village's farmland. This route created a partition between the village and the nearby Har Gilo settlement , and left a single road along which persons could enter or exit the village, in the direction of the adjacent town of Beit Jala. Traffic on this road was to be controlled by a checkpoint at the village gates. Another change in the route, made at the request of the Cremisan Monastery, placed the monastery and its lands on the western side of the Barrier. Citing financial constraints, Israel froze construction of the Barrier in the area of al-Walajah until early 2010. When construction recommenced in March 2010, residents of the village petitioned the High Court of Justice, claiming that the construction work was based in part on military requisition orders that were no longer valid, and that some of the work was being carried out on land that had not been seized on the basis of military orders at all. The High Court did not issue a temporary injunction prohibiting work until the petition could be heard, and the defense establishment began to work rapidly to build the Barrier, a wide patrol road, and a nine-meter-high concrete wall. The wall has been competed for the most part and it now surrounds most of the village, with the side of the wall facing the Har Gilo settlement covered by Jerusalem stone and the side facing al-Walajah being exposed concrete. The work has caused enormous damage, visible at a great distance, to the landscape of the Emek Refaim reserve.

Opposition to the route of the Separation Barrier

In a rare step, the Society for the Preservation of Nature in Israel submitted an opinion objecting to the route of the Barrier in the area of al-Walajah. Its opinion described the terraced landscape, which has existed for more than 1,500 years, as a cultural asset that preserves the terrace-cultivation tradition. The SPNI proposed that the area be preserved and declared a world heritage site. It also proposed moving the Barrier's route close to the road linking the village and Har Gilo to South Jerusalem. The Environmental  Protection Minister, Gilad Erdan, too, requested the minister of justice to refrain from harming the unique terraces in the area.
With the beginning of construction of the Barrier, the Giv'at Yael Company petitioned the High Court, contending that it had purchased land in the area of al-Walajah and that it intended to build a huge settlement that would create urban contiguity between Jerusalem and the Etzion Bloc settlements. The company filed an opinion prepared by Col. (ret.) Dani Tirza, former head of the Separation Barrier planning committee, which supports change in the Barrier's route. The company has not yet submitted its plan to the planning committees. The Jerusalem Municipality has already announced that it does not object to the company's plans. Effect of the Barrier on al-Walajah 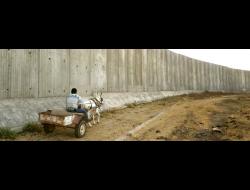