On Friday, 21 July 2017, at approximately 3:40 P.M., dozens of Israeli police officers entered the al-Makassed hospital compound in East Jerusalem, seeking to arrest a young Palestinian who had been wounded by gunfire – Muhammad Abu Ghanam (20) from a-Tur. When they entered the courtyard, youths and hospital guards tried to prevent them from going inside the building. The officers responded with stun grenades and sponge-round fire. About half of the force entered the building, where they split up and searched various wards for the injured youth. B’Tselem’s investigation, detailed below, revealed what took place in the hospital over the next forty minutes or so – in an emergency room (ER), in an operating room, in the blood bank and in various wards.

The Israeli security force violated the fundamental human principle, which is also enshrined in international law, that medical facilities are protected areas dedicated to caring for the sick and wounded. This is not the first time Israeli forces entered al-Makassed to arrest injured Palestinians, and such incidents have been reported in the past. A week earlier, on 17 July, during the previous round of clashes in the Old City, Israeli police reportedly entered the hospital to arrest a seriously injured person.

Breaching the boundaries of a medical facility in such circumstances cannot be justified, nor can the forces’ violent, life-endangering conduct. Violating the rule that security forces do not enter hospitals is one aspect of the overall policy and routine conduct of the Israeli authorities, which clarifies to hundreds of thousands of Palestinians from East Jerusalem that they are unwanted in their own city and their lives are disregarded.

A large contingent of police officers and Border Police went into the entrance hall leading to the reception area and to the ER on the ground floor, at the entrance to the hospital. Doctors, medical staff and other people who were there tried to push the wounded Abu Ghanam, who was lying on a bed hooked up to oxygen and a blood transfusion, into an elevator to take him to an operating room on the second floor. The officers tried to forcefully seize the bed and assaulted medical staff, including two nurses, a volunteer nurse, a doctor and several other individuals. In the commotion, the doctors noticed that Abu Ghanam’s condition was deteriorating and took him into an X-ray room near the elevator, where they tried to resuscitate him. The attempt failed and the doctors declared him dead. At that point, several youths took the body, carried it out of the hospital through a fence and transported it for burial, so that the police could not take it.

Some fifty people were waiting in the two blood bank rooms near the ER, on the ground floor, including medical staff, volunteers, and citizens who had responded to the hospital’s call for more blood donors. When the staff heard that security forces were in the hospital, they closed the door to stop the officers from entering. About eight officers forced the door open and ordered all those present to leave, except for three people who were giving blood at the time and three staff members. The officers closed the door from the inside and prevented entry. They stayed in the blood bank for about ten minutes without saying a word to the persons locked in with them, and then opened the door and left.

Department of surgery and operating room:

The hospital’s operating room is on the second floor, opposite the department of surgery. Five police officers entered the department and ran into a nurse on a break. They asked him where the wanted injured man was and pushed him out of the way when he replied that he did not know. The officers then went through the emergency door leading into the operating room. Three of them tried to force open the main, electric door into the room. A nurse who was inside the operating room opened the door for fear they would break it down. There was no surgery underway in the room at the time.

The department is on the first floor and comprises 13 patient rooms and a nursery. When the nurses learned that security forces were in the building, they gathered all the patients in the visitors’ room and took all the babies from their mothers, placing them in the nursery for fear they would be harmed. Six police officers entered the department, where they went from room to room searching for the injured youth for some 15 minutes. In one room, which was empty, they sprayed pepper gas.

The day of the raid – Friday, 21 July – a Muslim prayer was held outside the al-Aqsa compound in East Jerusalem, after the Israel Police breached the status quo by placing metal detectors at the entrance to the compound, after Palestinian citizens of Israel killed three Israeli police officers there. When the prayer was over, Palestinian youths began clashing with the police forces. The Red Crescent reported taking some 40 wounded persons to hospital that day. Many were taken to al-Makassed hospital, which is located in the neighborhood of a-Tur.

Muhammad Ghanam, the youth that the police were seeking, came with his friends earlier that day to a junction between the neighborhoods of a-Tur and a-Swaneh. Four or five Border Police officers were standing in a lot nearby. Shortly before 3:30 P.M., clashes developed between Border Police officers, who fired teargas grenades, and the youths, who threw stones and flares at them. Abu Ghanam and his two friends ran towards a-Sheikh ‘Anbar Street in the neighbourhood. Ghanam paused momentarily and tried to light a flare to throw at four Border Police officers who were several meters away. Some of the officers opened fire, injuring him. After he fell to the ground, they stood by for 5-10 minutes without offering him medical assistance. At that point, a Red Crescent ambulance with three medics approached and was blocked by a Border Police vehicle in the middle of the junction. Officers threw a stun grenade towards the ambulance, without hitting it. The medics got out of the ambulance to tend to Abu Ghanam, and managed to get him into the ambulance and drive away despite attempts by the police to prevent them. The injured Abu Ghanam arrived at al-Makassed hospital at approximately 3:40, at which point the hospital was raided as described above. The doctors found that he had been hit in the chest by a live bullet that entered his spine. Abu Ghanam was pronounced dead some 15-20 minutes after arriving at the hospital.

B’Tselem’s investigation found that, while leaving the hospital compound, the security forces acted violently towards people who had gathered outside, including firing stun grenades and sponge rounds at them. Several individuals were lightly injured and treated immediately at the hospital’s ER. 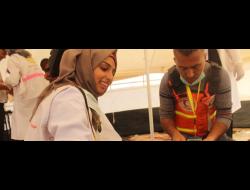 Thus shall it be done: How Israel punishes boys for protesting their confinement to Gaza 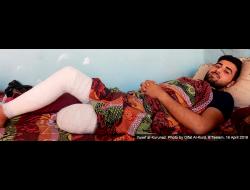