In the first half of 2016, Israeli authorities demolished more homes in Palestinian communities in the West Bank than in the entire previous year. This information, compiled by B’Tselem, will be presented today (Wed, 27 .7.2016) in a Knesset conference on Israel’s policy of Palestinian home demolition in Area C. In fact, the number of homes demolished over the last half year is greater than the number of homes demolished every year over the last decade – with the exception of 2013, in which the number was slightly higher, amounting to 175.

From January to the end of June 2016, the Civil Administration demolished 168 homes in the West Bank, leaving 740 Palestinians homeless – 384 of them minors. In some communities, residents had their homes demolished more than once (when a family home is demolished more than once, B’Tselem counts the people made homeless only once). In comparison, throughout 2015 the Civil Administration demolished 125 homes, leaving 496 Palestinians, including 287 minors, homeless.

Over the last decade, from the beginning of 2006 to 30 June 2016, Israel demolished at least 1,113 homes of Palestinians in the West Bank (not including East Jerusalem). As a result, at least 5,199 people, including at least 2,602 minors, were left homeless. Most of the demolitions were carried out in small, underprivileged communities located far from Palestinian population centers, primarily in the Jordan Valley, in the South Hebron Hills, and in the east of Jerusalem, in and around E1. Israel has full control of planning and building matters in these locations, which are part of the area defined Area C under the Oslo Accords, and refuses to recognize these communities.

The Israeli authorities impose an impossible daily reality on Palestinian communities in Area C by repeatedly demolishing their homes, constantly threatening further demolition, and other violations of their rights. This governmental policy, implemented systematically for years, constitutes the forced transfer of protected Palestinian residents within the occupied territory, in breach of international humanitarian law.

The extensive demolitions are part of a broader Israeli policy in Area C. This policy is based on the approach that this area, which spans some 60 percent of the West Bank, is intended primarily to serve Israeli needs. Accordingly, Israel acts to establish facts on the ground and to create a reality that it will be difficult to change in any future agreement. These measures include exploiting natural resources, establishing settlements, and expanding existing ones. At the same time, it has been the longstanding policy of various Israeli governments to displace and expel Palestinian residents from Area C, under flimsy pretexts such as “illegal construction” – a spurious claim given the absence of any real possibility for Palestinians to build legally in the area. Furthermore, this separation of Area C from the areas transferred to the Palestinian Authority is artificial and ignores the geo-economic reality of life in the West Bank. 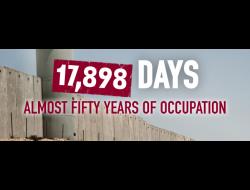