The film Smile, and the World Will Smile Back is the product of collaborative effort by filmmakers and a Hebron family of volunteer photographers

“Smile, and the World Will Smile Back”, a documentary film by the al-Haddad family of Hebron made in collaboration with Ehab Tarabieh and Yoav Gross – volunteer photographers in B'Tselem's camera project and filmmakers, respectively – is to be screened as part of the short film competition at the Berlinale International Film Festival.

The film documents one winter’s night at the al-Haddad home in Hebron. A group of soldiers arrives for a routine night search there, for reasons unknown to the family. Diaa and Shatha al-Haddad, brother and sister, pick up the home video camera and record the events as they unfold throughout the night. The soldiers force Diaa to stand facing a wall, saying they won’t leave unless he stops smiling.

In advance of the screening, B’Tselem Video Department Director Yoav Gross said: “B’Tselem’s cameras are known mostly for the straightforward documentation of injustice and violations of the law. The al-Haddads’ camera manages to convey something beyond the images usually captured by B’Tselem lenses. It offers us an unmediated view of everyday life under Israeli military rule, allowing us to briefly see the world from the point of view of the other”.

Ehab Tarabieh, B’Tselem Camera Project Coordinator: “As soon as B’Tselem’s video archive received the footage from the al-Haddads, we realized its cinematic quality. Something about how the camera was handed from one family member to another and its spontaneous positioning in relation to the situation that caught our eye us and inspired us to take the raw footage and convert it into a true documentary experience.“ 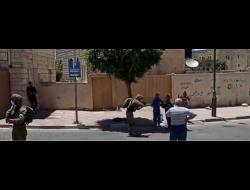 Hebron, 25 June 2020: Soldiers order Palestinian to strip; one aims loaded gun at woman and children and threatens to shoot bystanders