Video documentation: Yitzhar settlers burn crops, shoot and injure a Palestinian in the presence of Israeli soldiers who fail to stop them

Beginning mid-day on Saturday (26.5.12) dozens of Israeli settlers from the Yitzhar settlement, some of them masked and armed, invaded lands of the nearby Palestinian village, ‘Urif in the northern West Bank. According to video documentation and field observations, the settlers threw stones and set fire to wheat fields and olive groves in a number of locations, causing large fires that burned wheat and olive groves. Youths from the Palestinian village came to put out the fires, and some of them also threw stones at the settlers. In one particularly serious incident, some twenty settlers accompanied by about five armed members of the Yitzhar settlement security squad charged a group of Palestinian youths who had confronted them. The settlers fired live ammunition injuring a Palestinian man. This incident took place just a week after a Palestinian from the village of Asira a-Qibliya was shot and injured by gunfire from this same settlement security squad. The violent incidents in ‘Urif continued until evening.

Settlers’ attempted arson in the presence of Israeli soldiers, who do not detain them, allowing them to continue on to another location (arson attempt at minute 2:20)

All of these events took place in the presence of dozens of Israeli soldiers stationed in the area, who did not block the settlers on their way to ‘Urif, nor act to prevent the attack on the village. As documented by extensive video filmed by B’Tselem volunteers and staffers, the military’s intervention consisted largely in driving away Palestinian youth, but not the settlers, thus preventing the Palestinians from defending their property and putting out the fires. In addition, soldiers who reached the area just after settlers shot and injured a resident of the village, did not allow a medical team to reach him, and delayed his evacuation to hospital by some 15 minutes. Military forces also shot gas grenades at the Palestinians, which in at least one case also caused a fire.

B’Tselem was in contact with the Israeli military throughout these events and reported on the settlers’ incursion into ‘Urif village lands. The organization demanded that the military stop the settler assault, remove them from the site and enable Palestinians to put out the fires. Despite the military’s statements that they are studying last week’s events, the military failed in its obligation to protect the residents of ‘Urif and to prevent the settlers’ rampage: they allowed the settlers to reach ‘Urif village lands and did not prevent arson attempts on the farmland. In addition, they did not detain the attackers and hand them over to the police, as they are obligated to do. B’Tselem will provide all its video documentation to Israeli law enforcement authorities and demands that the military fulfill its obligation to protect Palestinians from violence by Yitzhar settlers. 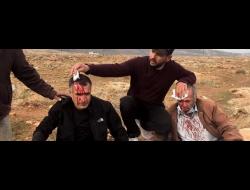