B'Tselem wrote to Israel 's Attorney General, Menachem Mazuz, asking him to order an investigation into the excessive force used by the Israel Police during the dismantling of the permanent houses in the 'Amona settlement. In its letter, the organization noted that the Department for the Investigation of Police must investigate suspicions of illegal behavior, both in the orders that were issued and in the police use of violence against demonstrators that did not actively resist or attack police officers.

B'Tselem notes that all Israeli settlements in the West Bank , including the unauthorized outposts, are a violation of international law. The decision to evict settlers from 'Amona and destroy the permanent houses there was justified. However, during the course of the eviction, police officers used force that exceeded what was necessary to remove demonstrators. B'Tselem calls upon the security forces to prevent the use of excessive force in future operations.

B'Tselem adds that the 'Amona outpost, established on privately owned Palestinian land, has not in fact been dismantled. The mobile homes placed there remain, and the settlers have not left. 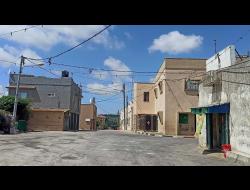