These are not isolated incidents. They are a reflection of Israel’s policy in the West Bank, which leaves Palestinian homes, fields, vehicles and belongings unprotected and constantly vulnerable to attacks by settlers. The implications of this policy run much deeper than the physical damage caused to a car or an olive grove. It has the cumulative effect of instilling terror among Palestinians who live under occupation, in the knowledge that their personal safety and their property count for nothing and there is no one to protect them.

* On 13 November, after soldiers were killed near Ofra, scores of settlers rioted, attacking Palestinian cars on the roads. This incident, which does not appear in this blog, will be covered in a future publication. 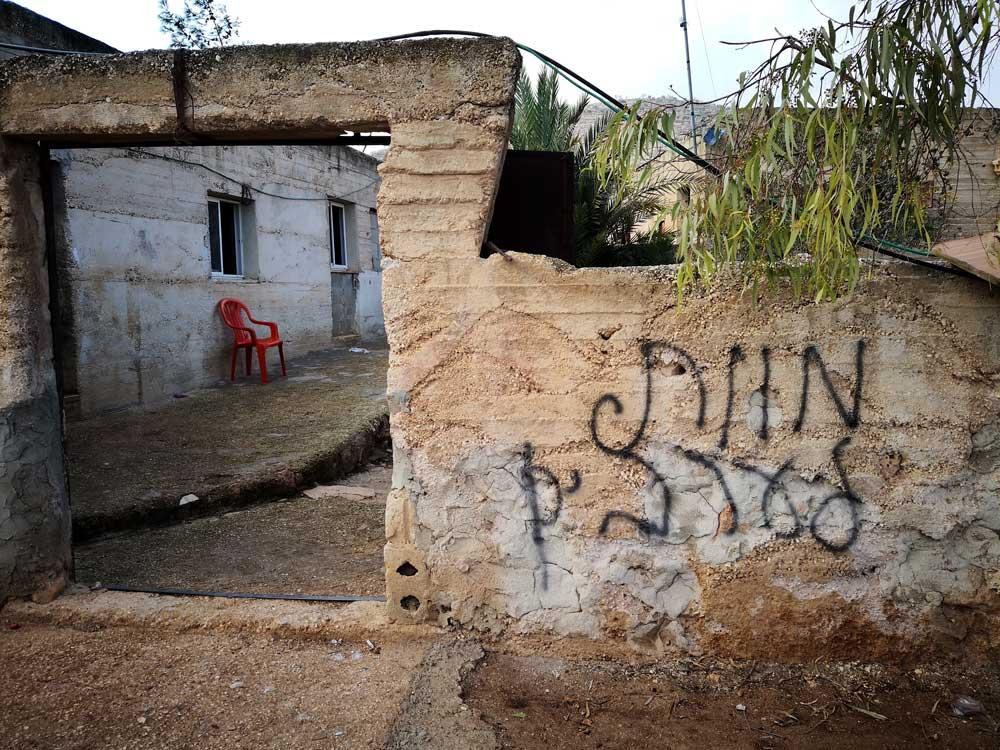 On 25 November 2018, before dawn, four residents of the a-Naqar neighborhood, which lies in the northwestern part of al-Mughayir, discovered found all of their car tires and the walls of their homes graffitied. The settlement point of Adei Ad was built north of the village. Photos by Iyad Hadad, B'Tselem. 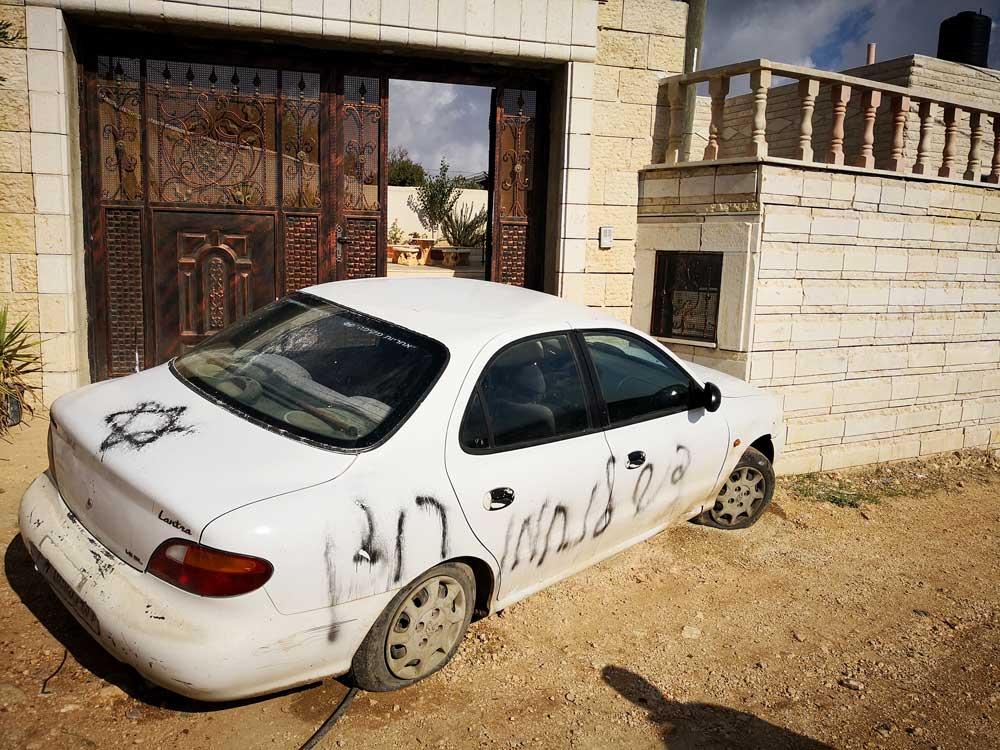 In a testimony he gave that day to B'Tselem field researcher Iyad Hadad, Mujahed Na’asan, the owner of the car pictured above, said: “My neighbor woke me up before dawn and told me to go outside and see what the settlers had done. We all had a hard time getting back to sleep after that. We were afraid the settlers were still in the village and would hurt us. Back in July, they vandalized our car and ten others and sprayed graffiti in the same neighborhood. We filed a complaint with the DCO back then, and Israeli police officers came. But nothing has come of it. They attacked us again because they’re not worried that anyone will do anything to them. How long will this go on?” 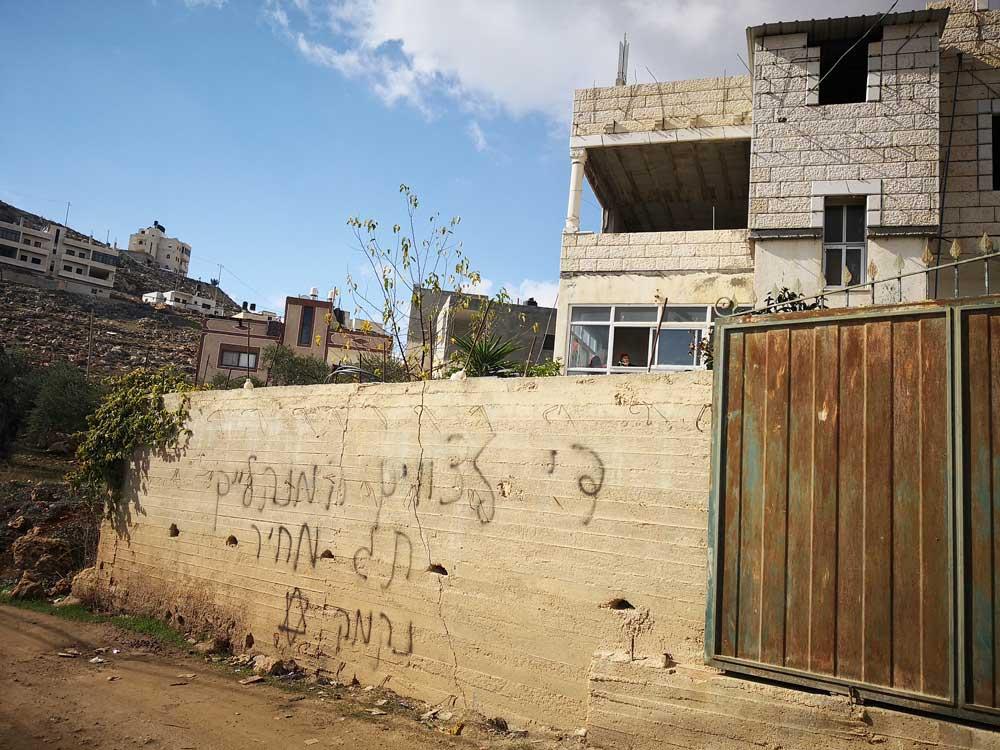 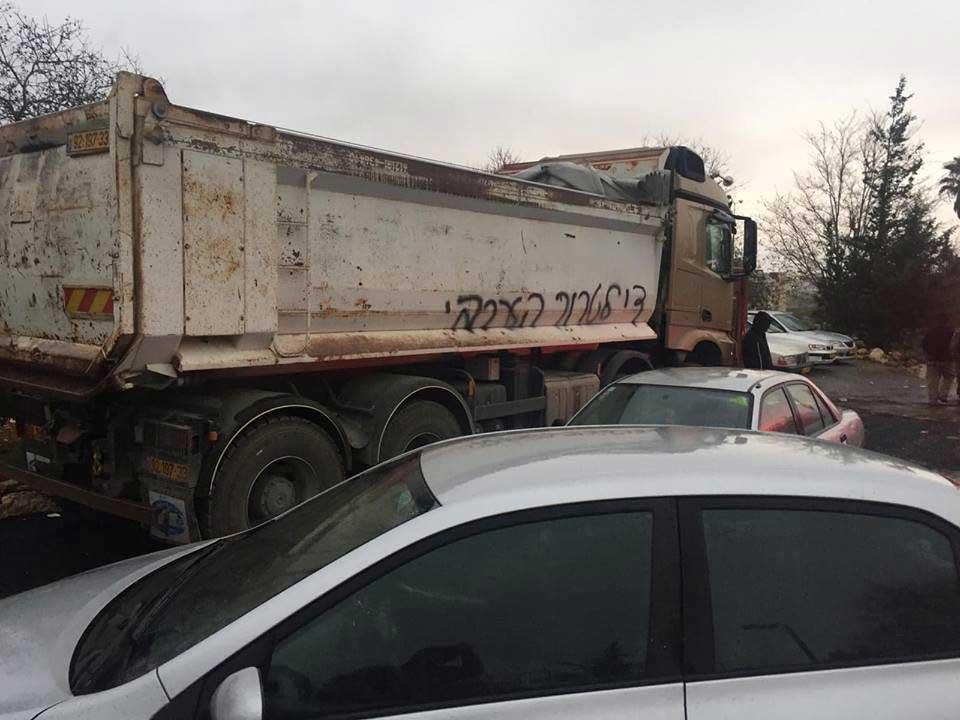 On the morning of 23 Nov. 2018, residents of al-Burij - a neighborhood of Beit Iksa that was cut off from the village by the Separation Barrier, and near which the Israeli neighborhood of Ramot was established (on West Bank land) - found graffiti sprayed on two cars and the tires of 14 cars slashed. Photos courtesy of residents. 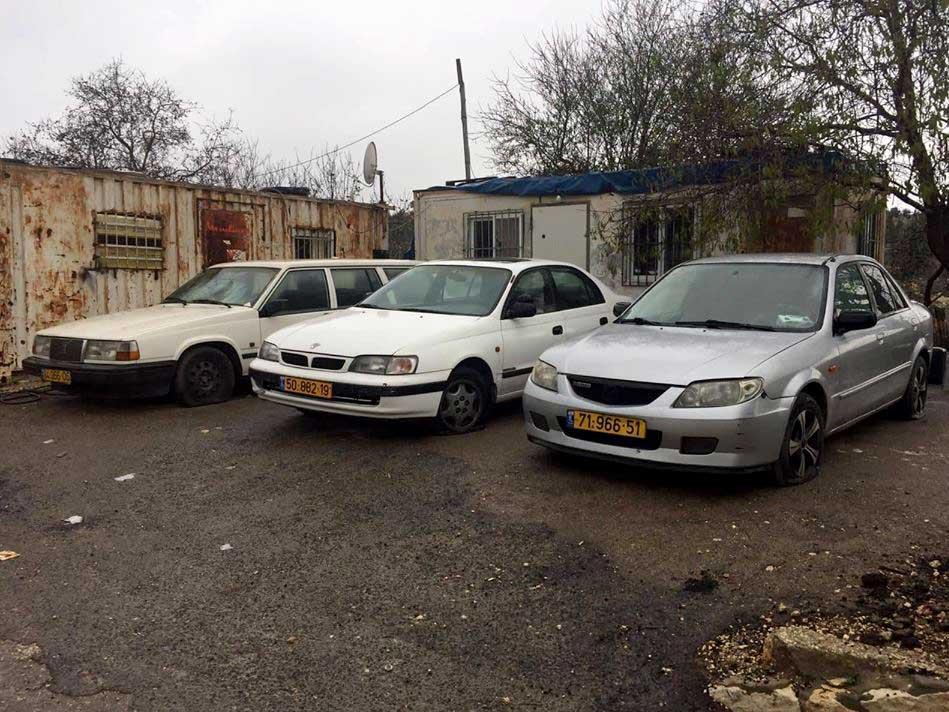 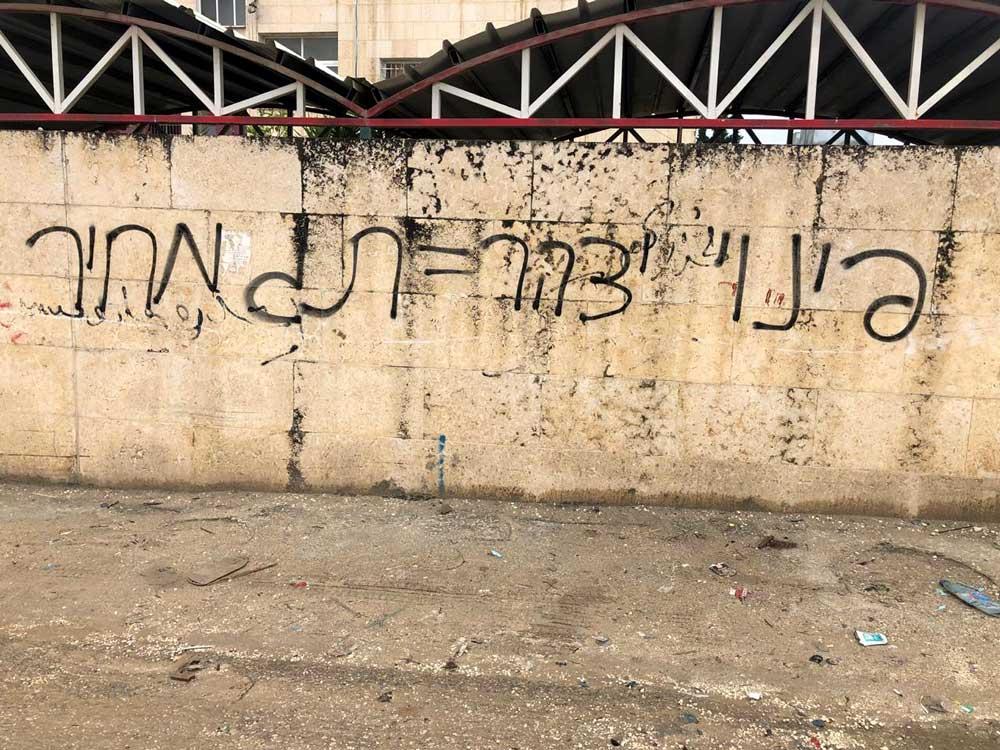 On 23 November 2018, residents of 'Asirah al-Qibliyah, south of Nablus, discovered that settlers had slashed the tires of 17 vehicles in the village. In Huwarah, residents found 11 more cars with slashed tires. Settlers had sprayed graffiti on some of the cars and on house fences. In Huwarah, the school fence was also graffitied. The settlement of Yitzhar was built between the two villages. Photos by Salma a-Deb'i, B'Tselem. 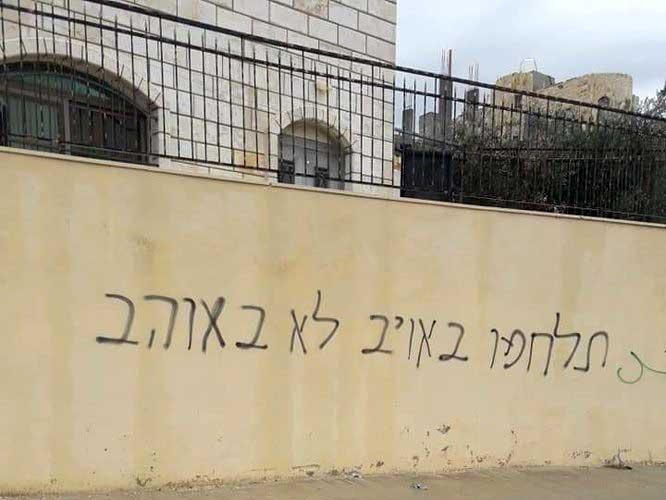 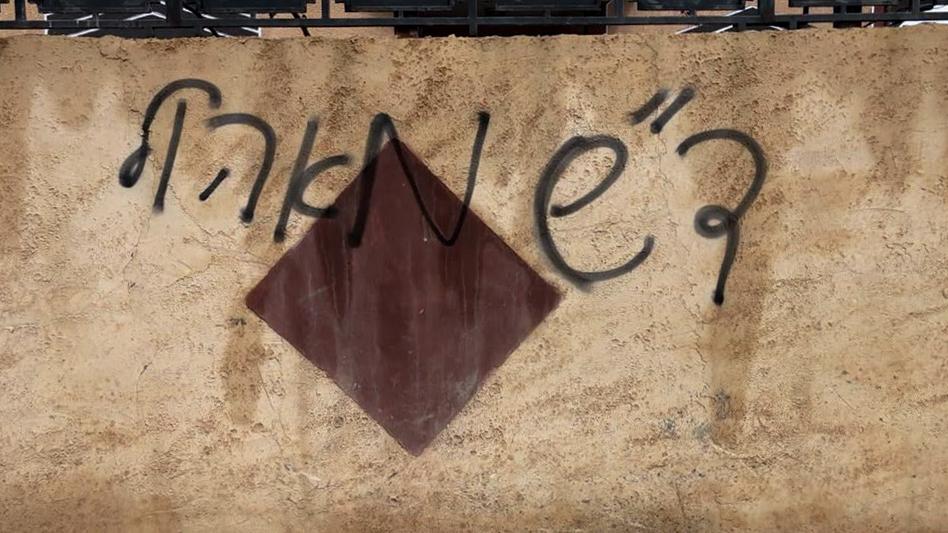 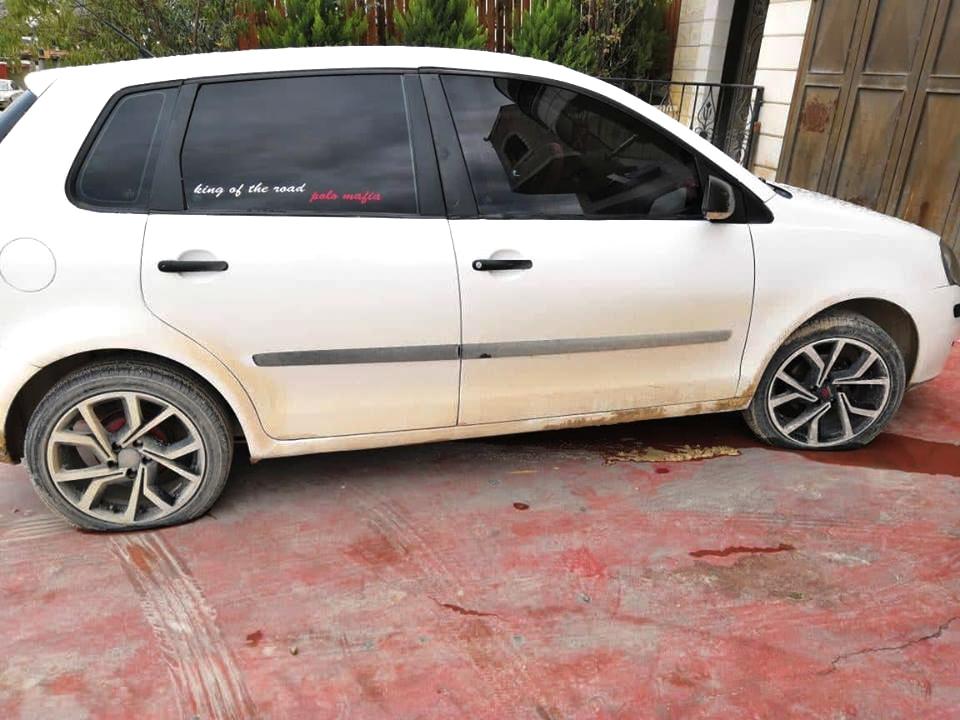 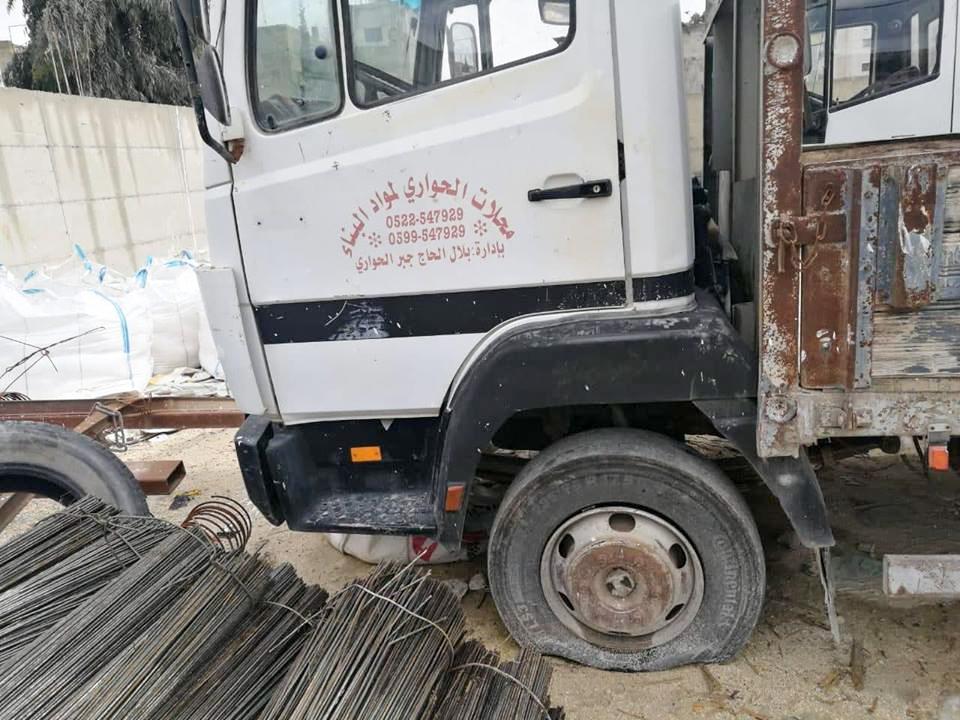 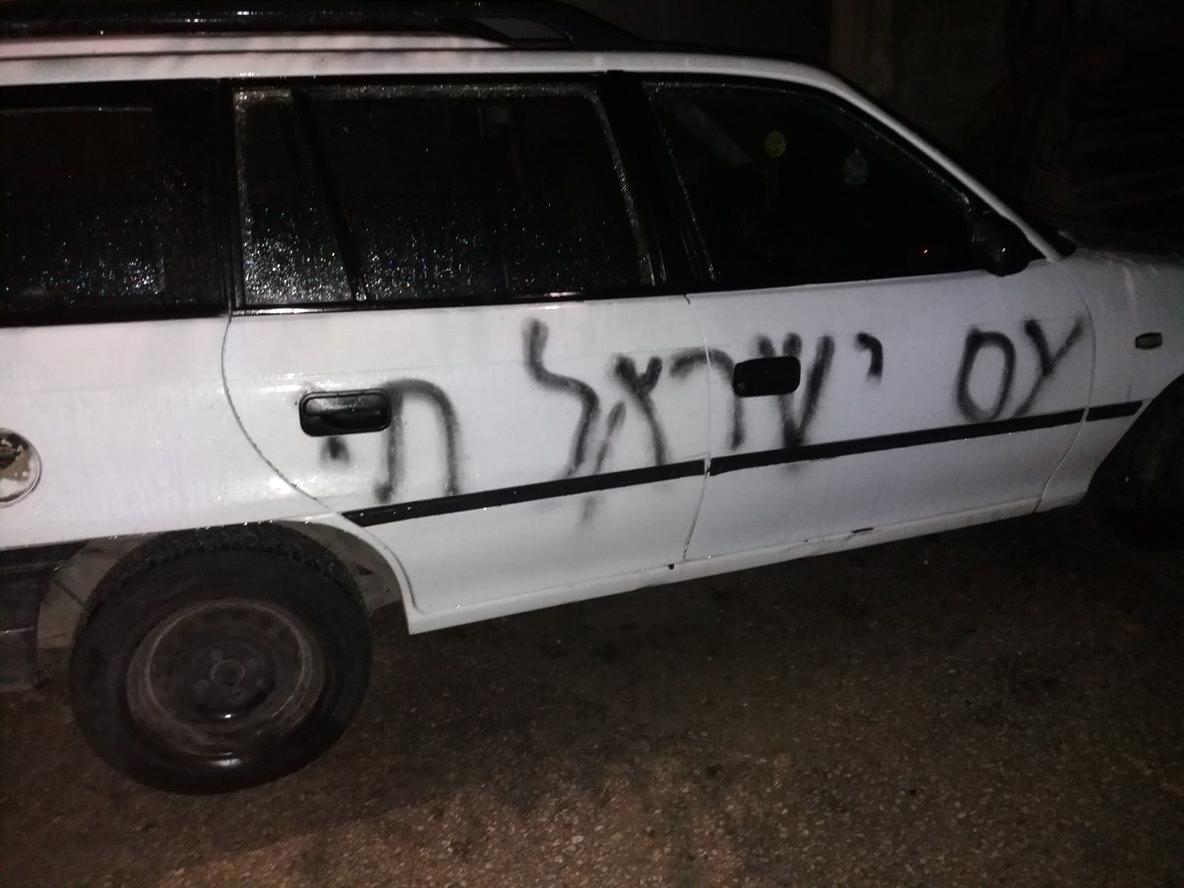 On the morning of 11 December 2018, residents of Beitin, a village that lies northeast of Ramallah, woke to find that settlers had sprayed graffiti on cars and slashed the tires of 24 cars and two trucks. Seventeen of the cars had all four tires slashed. The graffiti read, in Hebrew: “We do not sleep when the name of God is blasphemed”, “I will not sleep while blood is spilt”. The vandalism occured in the a-Teina neighborhood, which is close to Road 60, and in the center of the village, near the girls’ school. The incident was captured on the school’s security cameras. The settlements of Givat Assaf and Ofra were built near the village. Photos by Photos by Iyad Hadad, B'Tselem. 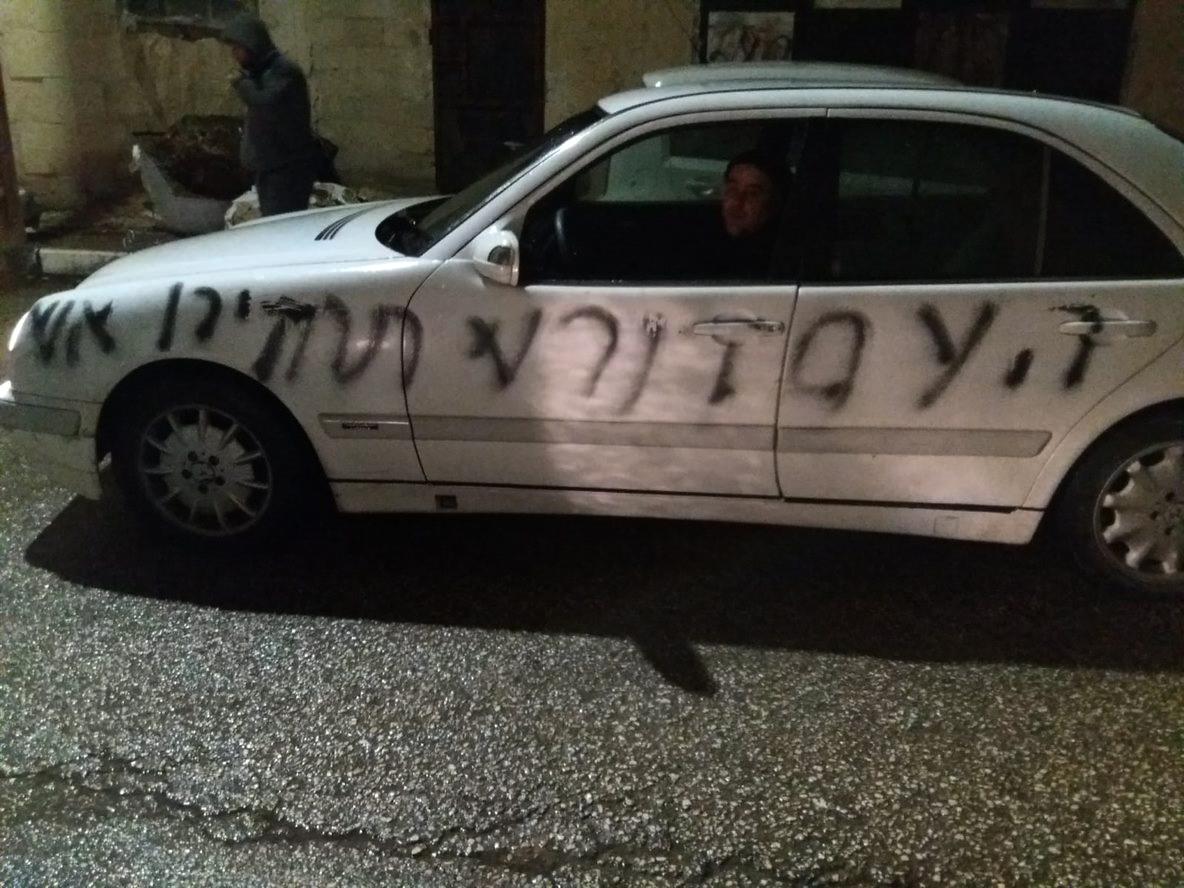 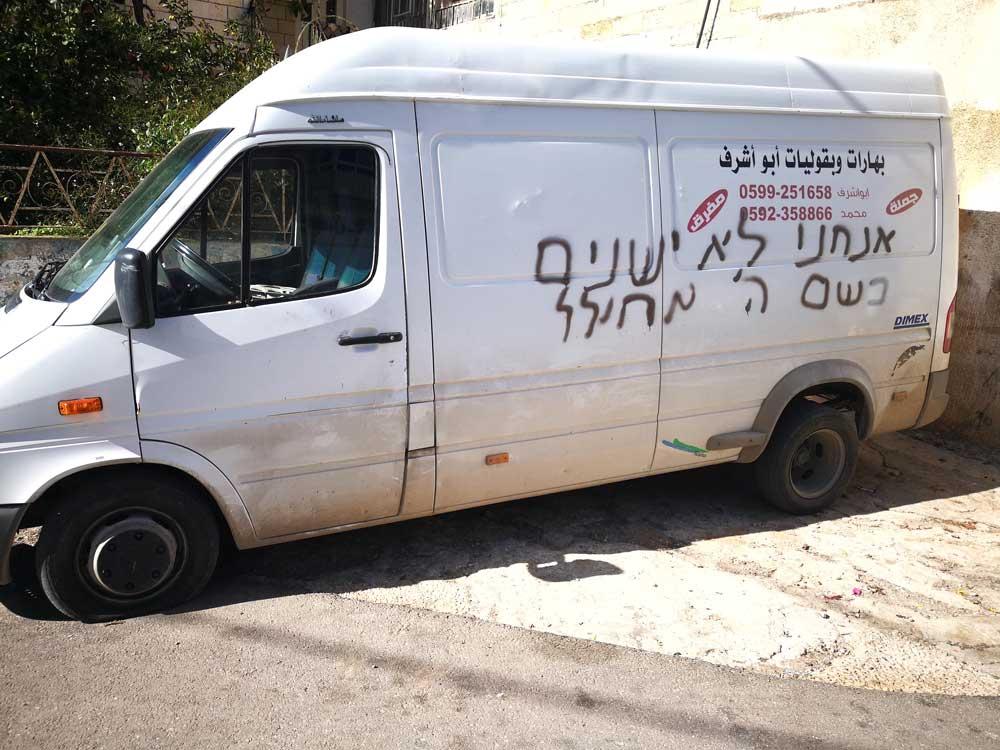 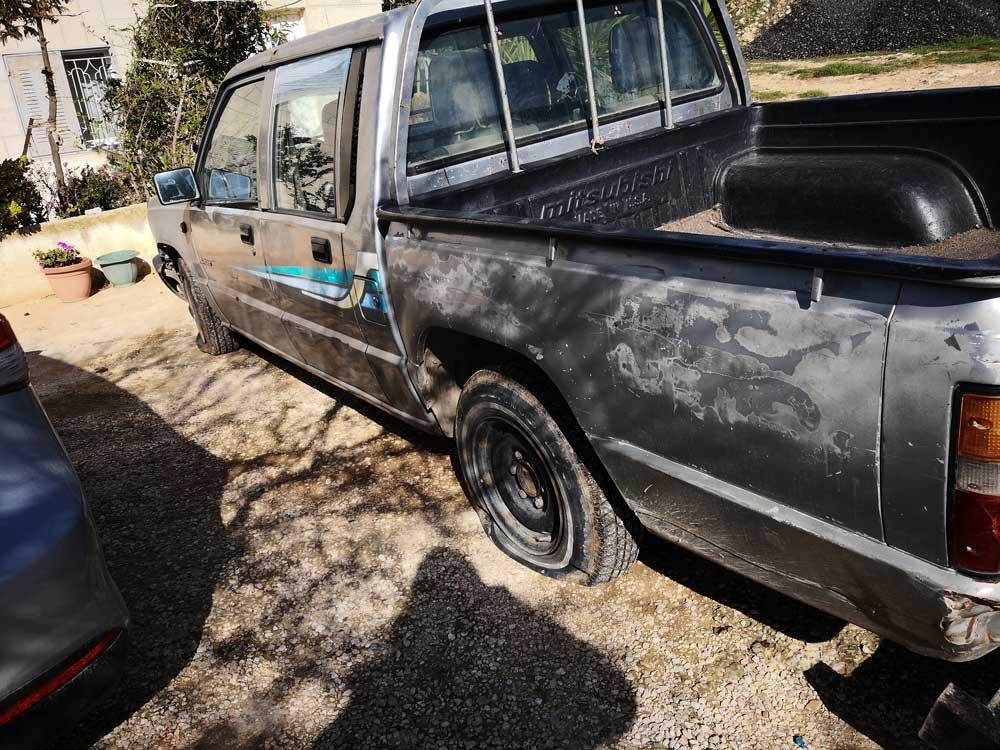 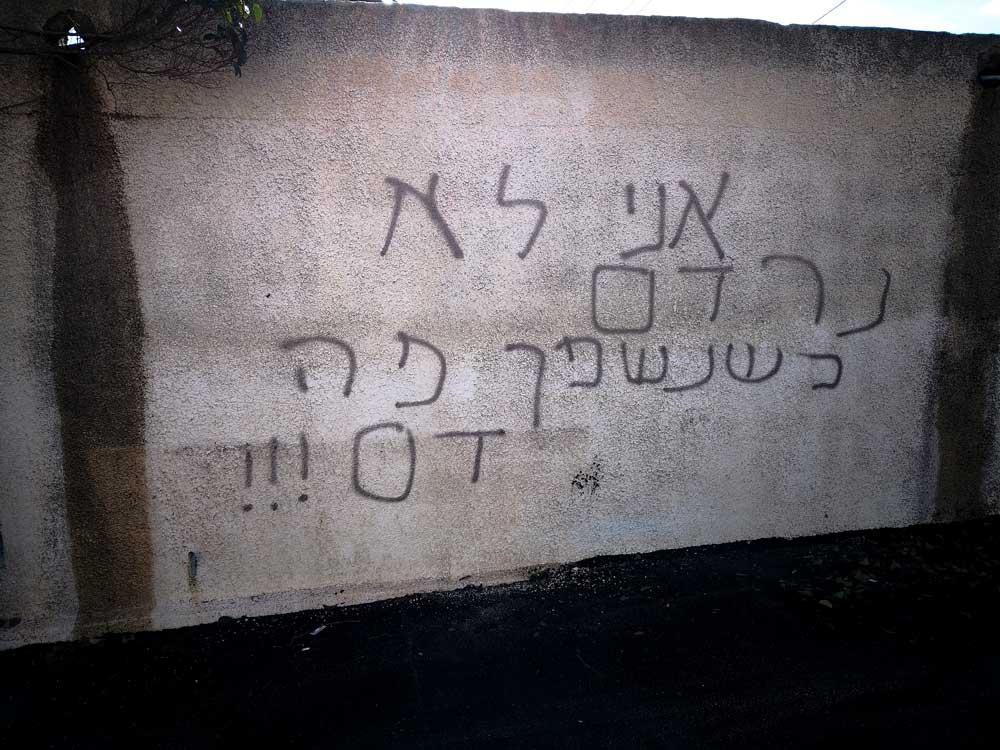 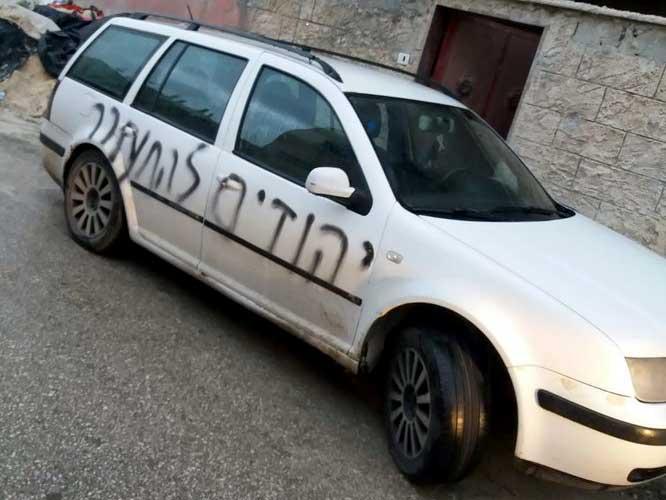 On the morning of 18 December 2018, residents of Yasuf, a village that lies north of the town of Salfit, were surprised to find house fences covered in graffit and cars parked along the main street similarly spraypainted, their tires slashed. The graffiti read, in Hebrew: “Jews wake up”, “The people of Israel are alive” and “The people demand destruction by fire”. A Star of David was sprayed on the mosque wall. The settlements of Kfar Tapuah, Rehelim and Nofei Nehemia were built near the village. Photos by Salma a-Deb'i, B'Tselem. 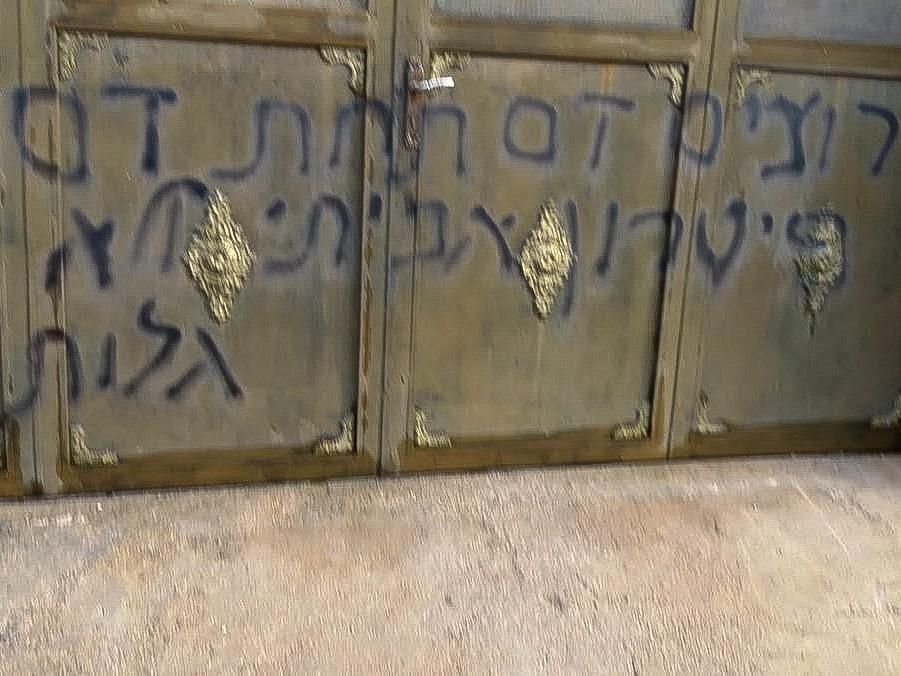 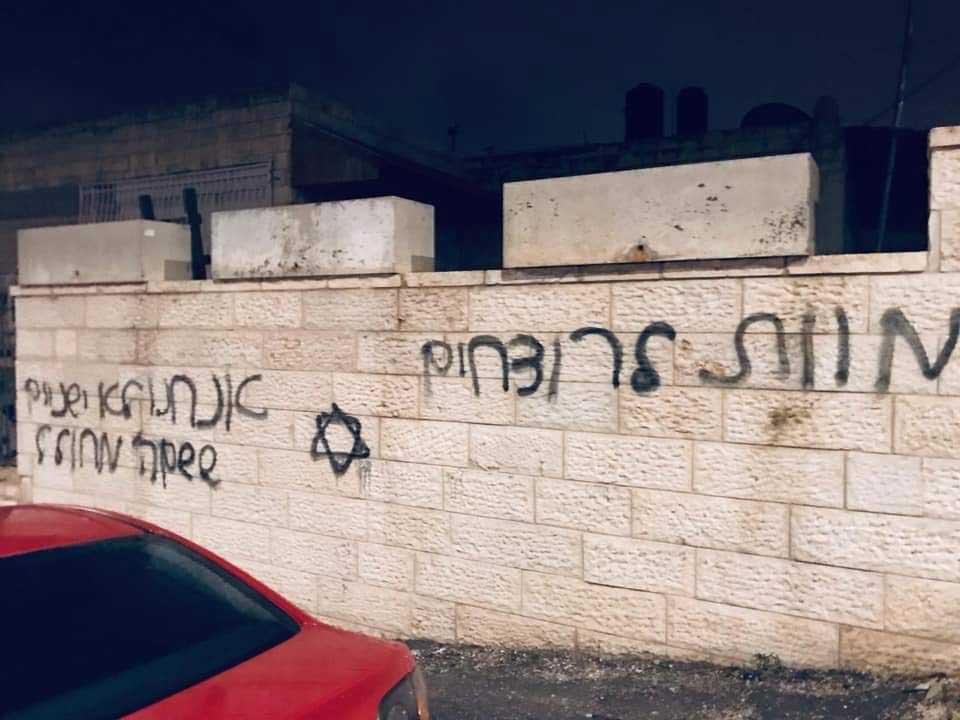 On the morning of 20 Dec. 2018, residents of al-Gharabli - a neighborhood of Beit Hanina, near which the Israeli neighborhood of Pisgat Ze'ev was established (on West Bank land) - found the slogan "Death to murderers, we don't sleep when God's name is blasphemed" sprayed on a house wall and the tires of 27 cars slashed. The vandalism was captured on CCTV cameras. Photo by 'Amer 'Aruri, B'Tsleem. 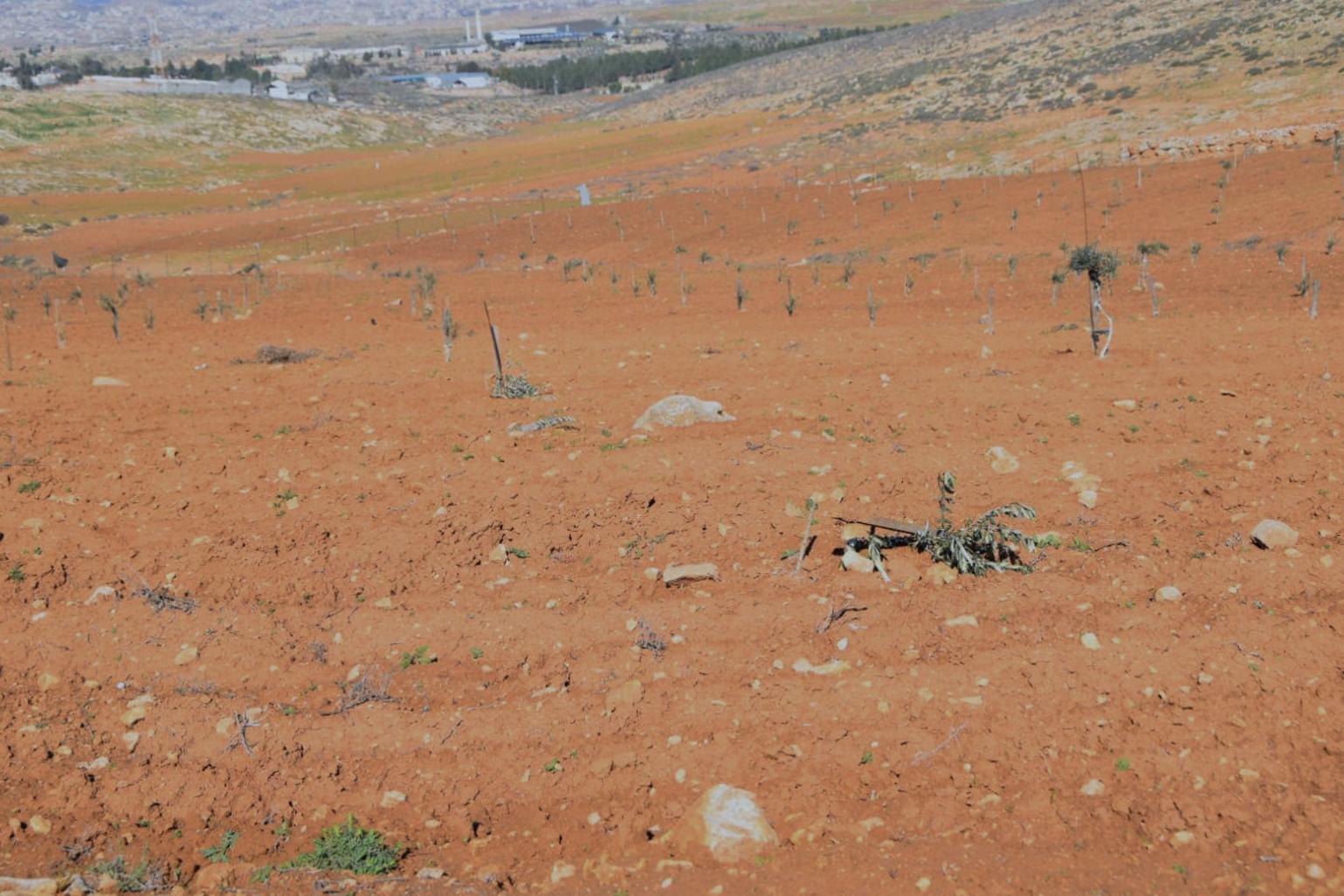 On 23 December 2018, Barakat Mor, a farmer from Khirbet Susiya, discovered that settlers had uprooted 110 two-year-old saplings in his olive grove, which lies 400 meters east of the village. The settlement of Susiya was built about 500 meters south of the village. Photos by Nasser Nawaj'ah, B'Tselem. 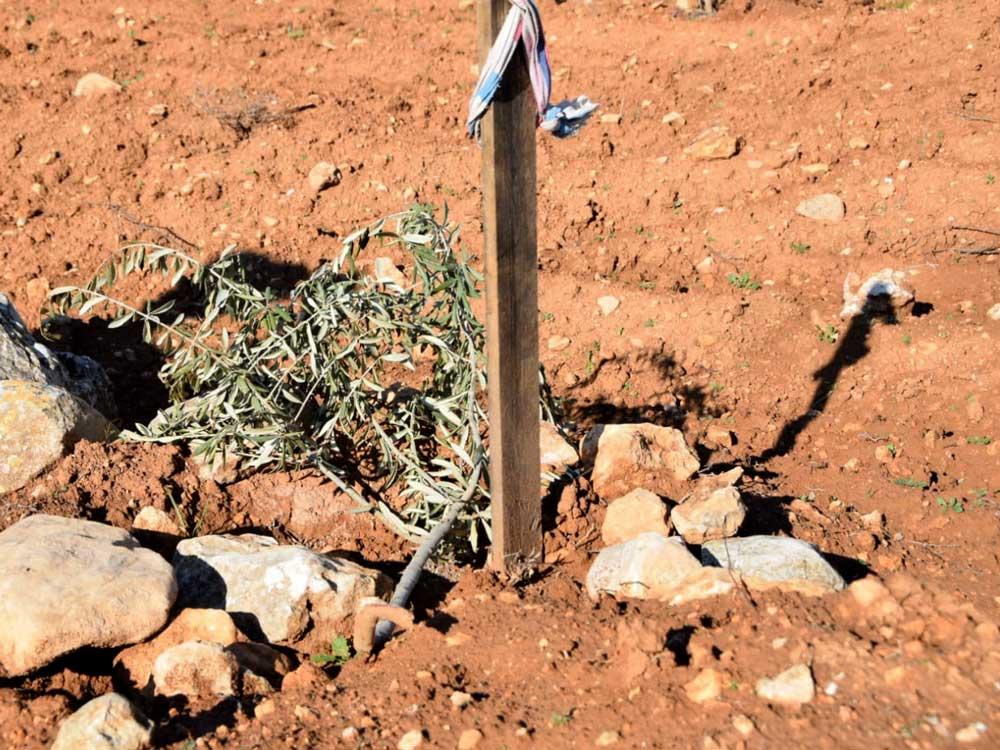