On 27 January 2014 the Jerusalem Municipality demolished homes and other buildings in East Jerusalem. Following are images of four of the homes demolished that day as well as images of another home whose owner was compelled to demolish the structure himself. All photos are by B’Tselem field researcher ‘Amer ‘Aruri.

These photos illustrate Israel’s policy in East Jerusalem, which aims to keep a majority of Jerusalem’s population Jewish. To that end, Israel greatly restricts the development of Palestinian neighborhoods and practically precludes lawful construction there:

Israel has appropriated vast tracts of land surrounding heavily populated Palestinian areas in East Jerusalem and built Jewish neighborhoods on those lands. Master plans for Palestinian neighborhoods drawn up by the Jerusalem Municipality are partial and are a far cry from meeting the needs of the residents or relieving high residential density. The plans result in a shortage of public buildings and open spaces. Residential density in these neighborhoods is extremely high. For example, according to figures by Israeli human rights organization Bimkom the East Jerusalem neighborhood of al-'Esawiyah has a population density 2.5 times as high as that of nearby Jewish neighborhoods.

East Jerusalem residents have no option but to build their homes without construction permits. Their homes face the constant threat of demolition, so residents live in a continual state of uncertainty regarding their future. From 2004 through December 2013, the Jerusalem Municipality and Israel’s Ministry of the Interior demolished 498 residences in East Jerusalem, rendering homeless 1,948 people, including 1,063 minors. 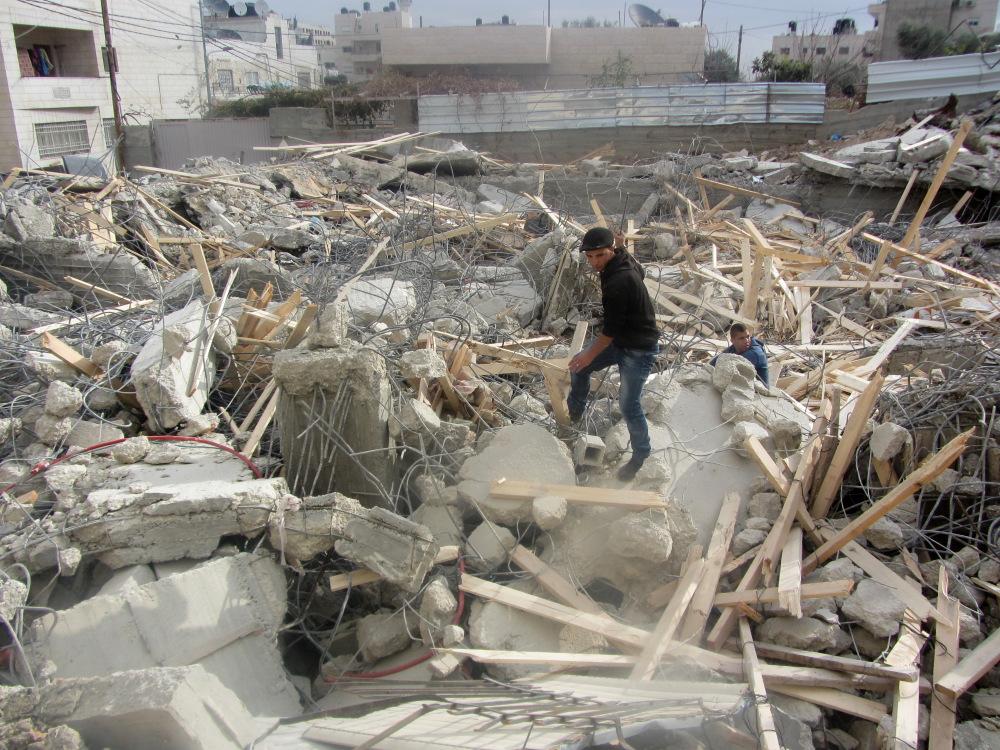 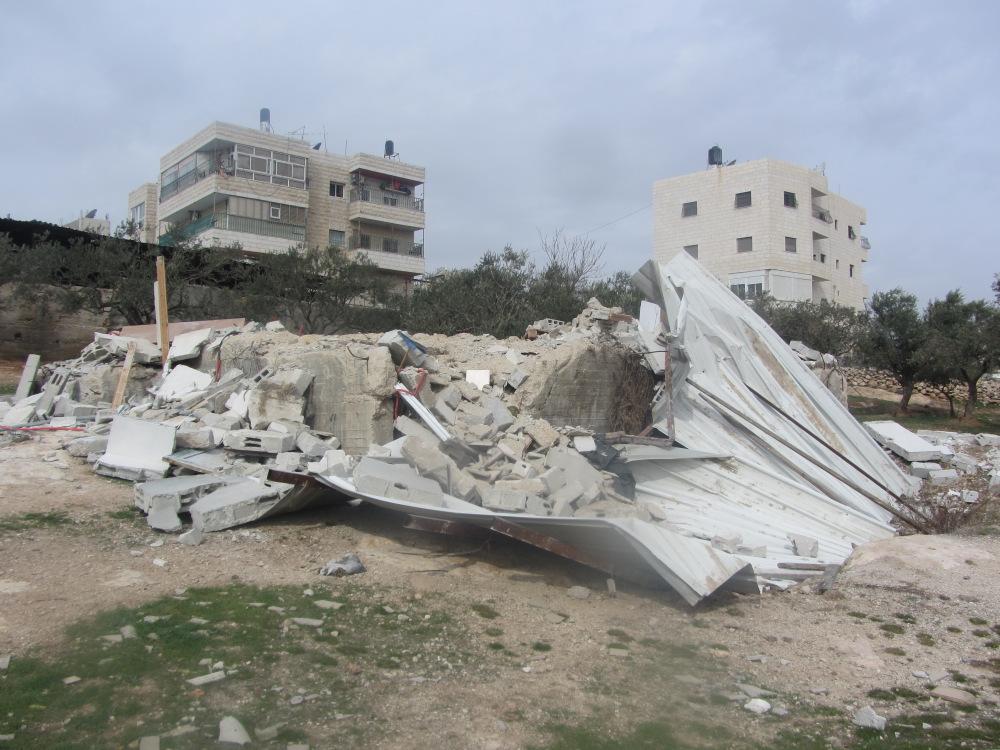 Ruins of a single-room, tin-roofed building owned by the Nasser family of al-'Esawiyah. Their home – built on their own private family property – had been demolished by the Jerusalem Municipality in 2004, and the family moved in with a relative in the village. In 2007 the Nassers built a one-room, tin-roofed structure near their olive groves, for use during the summer. 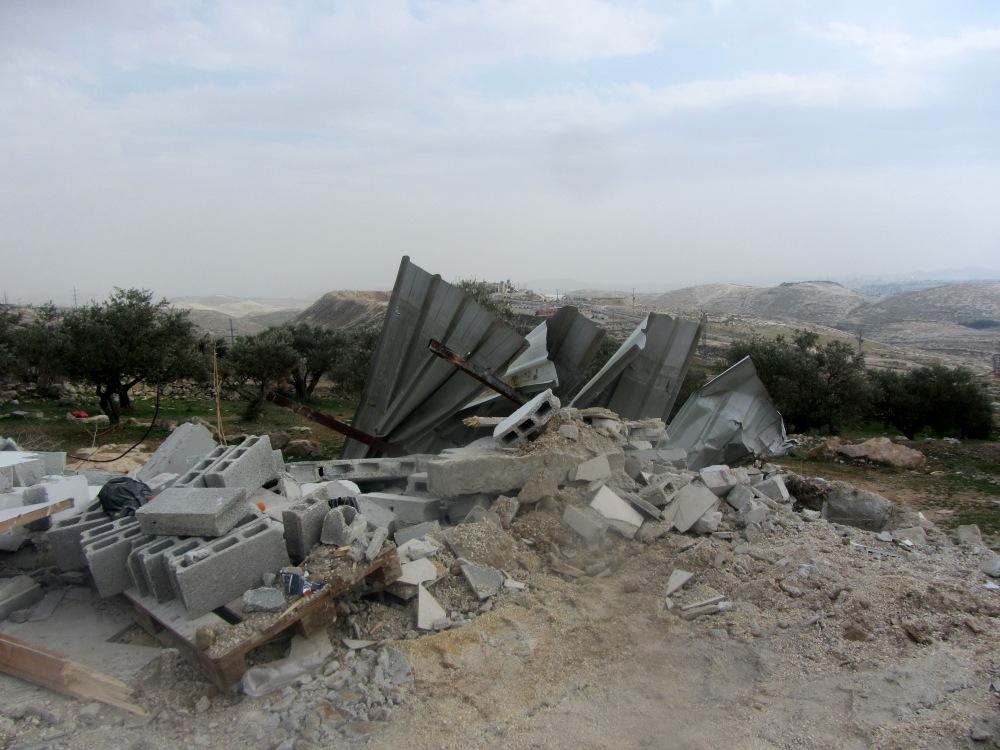 Ruins of the Nassers’ building. 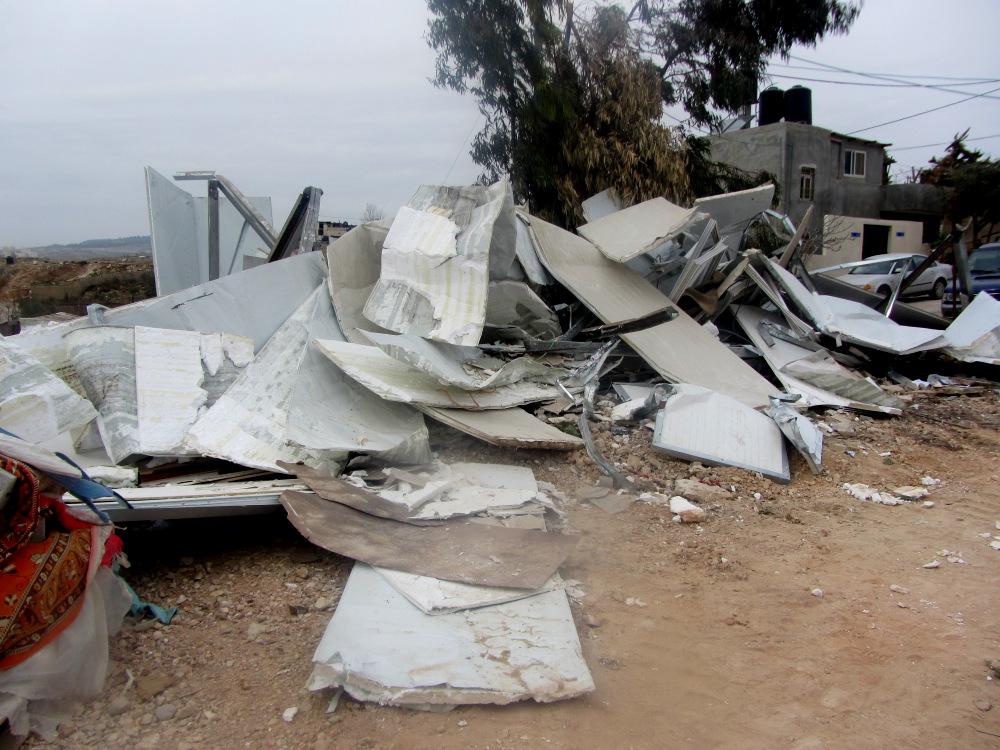 Remains of a pre-fab building used to store furniture belonging to the al-Kiswani family of Beit Hanina. In February 2013 the Jerusalem Municipality demolished the family’s home at that location, so the family lived in a pre-fab they erected there. In the winter, due to the harsh weather, the parents moved with their seven minor children into a rented apartment and stored some of their furniture in the pre-fab. They had planned to return in the summer to live in it. 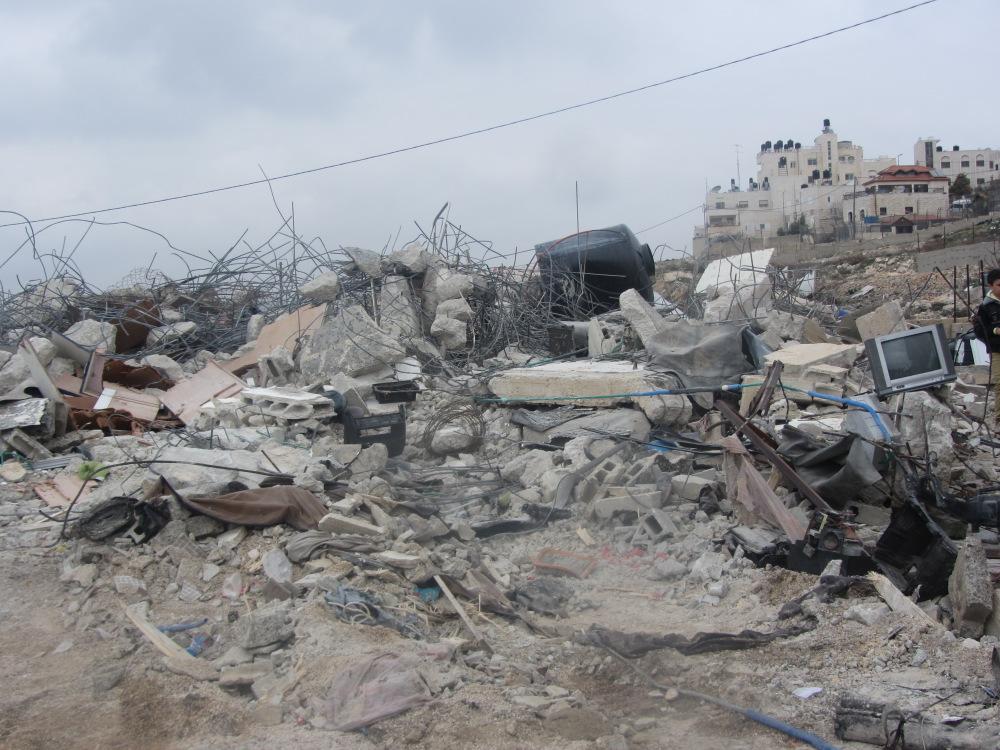 Ruins of the home of Fatenah and ‘Azzam Idris, Beit Hanina. There had been two apartments in the building: one was home to the 8-member Idris family and the other to their relative Mai who lived there with her husband Baha a-Deb’i and their two minor children. 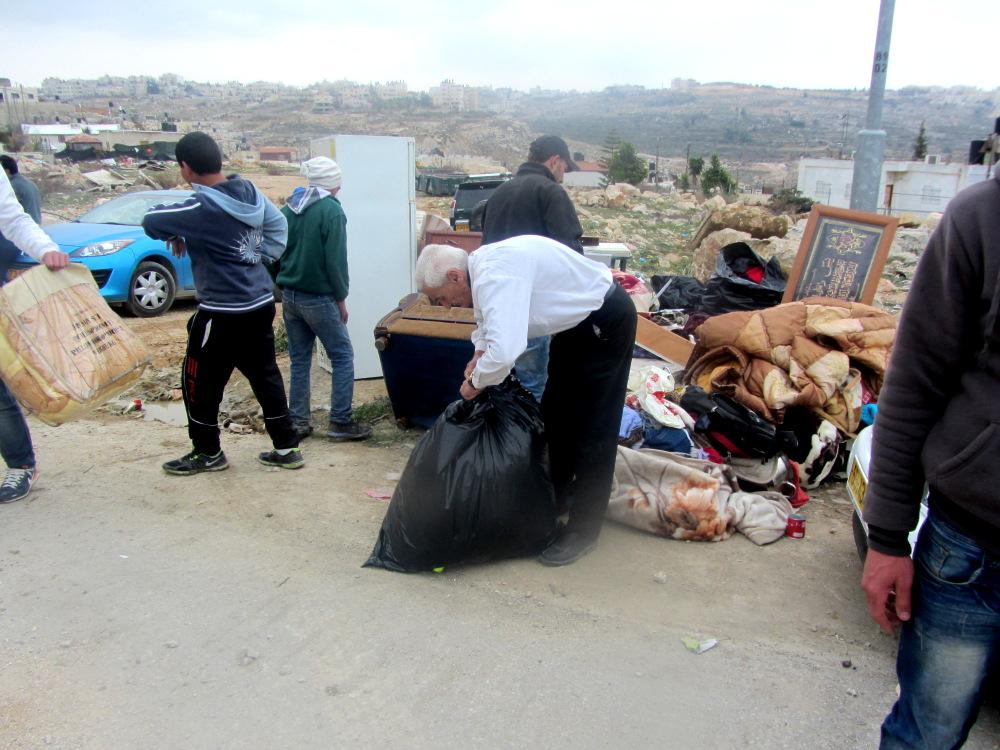 The Idris family collecting their belongings after the demolition 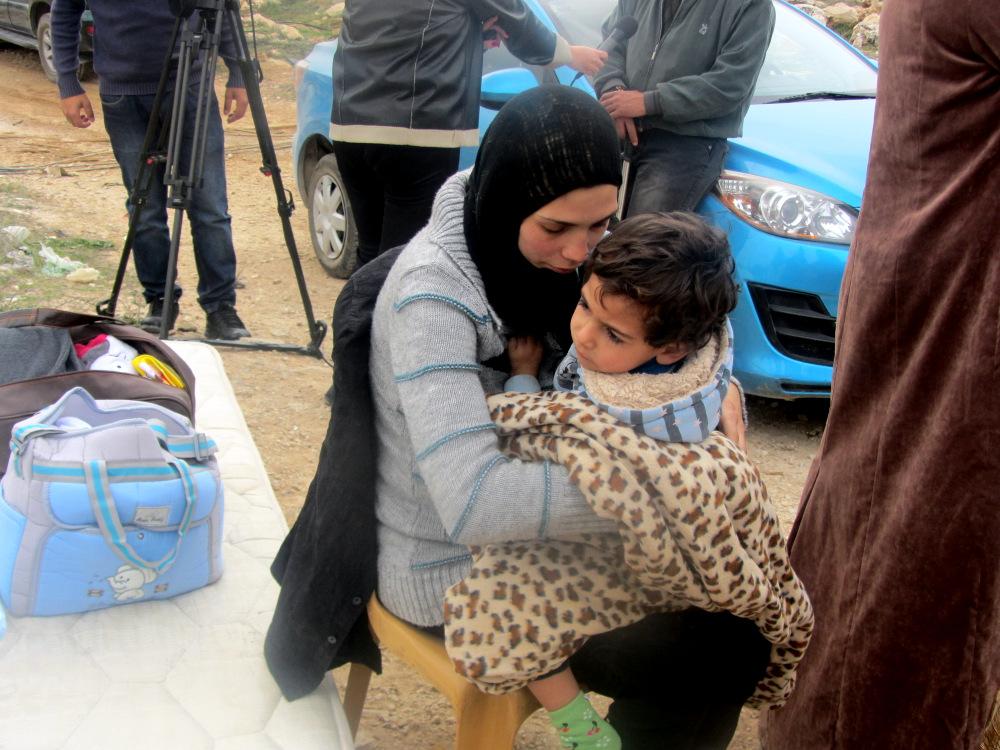 Mai a-Deb’i , nine-months pregnant, with her 2½ -year-old son Muhammad. After the house was demolished, Mai and Baha a-Deb’i were compelled to move into a one-room apartment owned by Baha a-Debi’s parents in Shu’afat Refugee Camp. 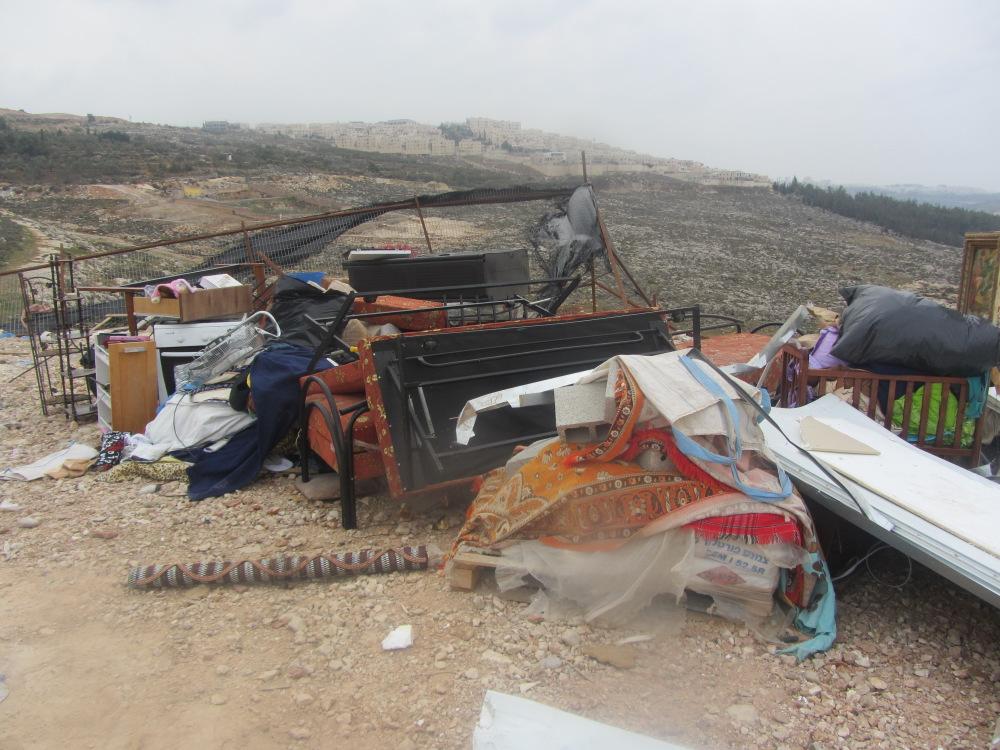 The al-Kiswani’ furniture strewn about outside after the demolition. 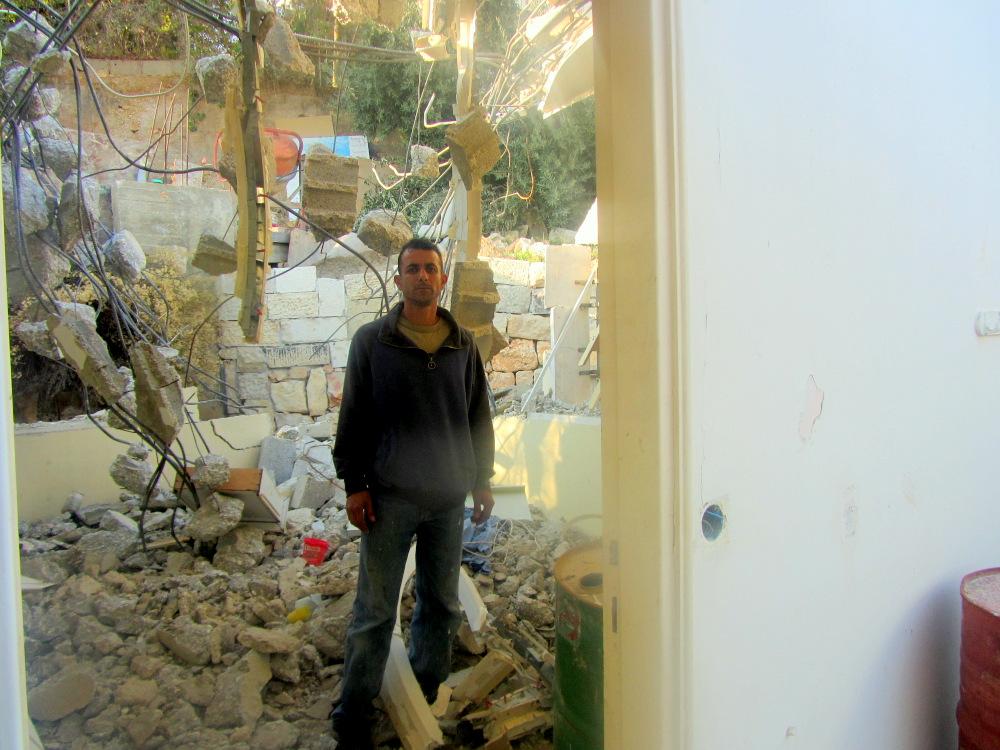 Hamza Abu Tir in ruins of his home at Um Tuba, where he had lived with his wife and their three children. On 14 January 2014 Abu Tir was compelled to demolish his home himself after he received a demolition order from the municipality. By undertaking the demolition himself, he avoided paying the cost of demolition by the municipality and other fines. The family has no permanent residence at present.