Dura, Hebron District: Entire town harassed for a month for being hometown of suspected assailant

Two months ago, Israeli security forces began enforcing significant travel restrictions on the 900,000 or so Palestinians who live in the Hebron District. The restrictions were imposed following two attacks perpetrated by Palestinians against Israelis in the area, in which 13-year-old Hallel Yaffa Ariel was stabbed to death in her home in Kiryat Arba on 30 June 2016, and Rabbi Michael Mark was killed and his wife and two of their children wounded in a drive-by shooting the next day, 1 July 2016. One Palestinian community placed under such restrictions was the town of Dura, the hometown of the suspected assailant in the second attack, 29-year-old Muhammad Jbarah Ahmad al-Faqih – although he has moved to Hebron. After the drive-by shooting, the military blocked off Dura’s main exit to Route 60, the chief traffic artery between the town and the villages to its south, allowing only pedestrian traffic to the town’s population of approximately 30,000. The restrictions placed on Dura were lifted on 25 July 2016, two days before al-Faqih was located in the village of Surif (located southwest of Bethlehem, many miles from Dura). On 27 July, soldiers and Special Police Unit forces surrounded the house where al-Faqih was hiding and he was killed in an exchange of gunfire. The house was razed to the ground with a bulldozer.

The travel restrictions were only one way in which life was disrupted in Dura over the course of July. Inquiries by B’Tselem field researcher Musa Abu Hashhash revealed that security forces entered homes in the town every day, usually at night, ostensibly as part of their search for al-Faqih, and by the end of the month had raided more than one hundred homes in the town. In the raids, the soldiers questioned household members about the shooting attack; in some cases they used violence and brought dogs with them.

The raids followed a pattern: a large number of soldiers would arrive at a home and knock loudly on the door, in some cases attempting to force it open. They then questioned the occupants – sometimes all the adults and sometimes only the men. Other family members were taken into a room in the house and ordered not to come out until the soldiers left. In some cases, the persons being questioned were handcuffed for the duration of the soldiers’ stay in the house. Soldiers gave some occupants summons for questioning or arrested them, but in most cases, the raids ended after a short general questioning.

Khaled Jbarah al-Faqih, 27, the suspect's brother, lives in Dura with his wife and two children. In a testimony he gave B’Tselem on 11 July 2016, he related the violent night raid of his home:

I live with my wife and two small children. My mother lives in another apartment in the building and my unmarried brother Suhayb in another. On 4 July 2016, at 2:00 A.M., a large military detail came to the center of the village. I saw soldiers standing at the entrance to the building and trying to force the door open. I asked my wife to take the children and go up to my mother’s apartment on the second floor. I grabbed my medical records stating that I have a heart condition and my medication, and went to open the main door. A lot of soldiers stormed in. They took me up to my mother’s apartment on the second floor, where the rest of the family was. More soldiers came in with masks over their faces. They took Suhayb, our sister Asmaa, and myself to Suhayb’s apartment and put each one of us in a different room. A man in civilian clothing came into the room I was in and started questioning me about my brother Muhammad and when I’d seen him last. In the meantime, I could see and hear soldiers walking around in the house, moving things. I later found out that Suhayb and Asmaa were questioned at the same time I was.

It was Ramadan, and it was already 3:00 A.M. The soldiers brought me a jug of water and told me I could drink. I told them I had to eat something so I could take my medication but they refused, even though I showed them the medical records. At around 4:30 A.M., they started leaving. The soldiers handcuffed Suhayb and me and led us outside. They put each of us in a separate military vehicle. During the ride, they blindfolded me. When we stopped, they put me up against a fence and removed the blindfold. I was in an open yard. Suhayb got there a few minutes later and they sat him down next to me. We realized we were in the military facility in the settlement of Beit Hagai.

They held us there until morning. At about 7:00 A.M., another man in civilian clothing came and told us we were lying and that he was sending us in to be interrogated. A soldier blindfolded me again and put me into an military vehicle. After a short drive, the vehicle stopped. The soldiers took me out, blindfolded and handcuffed. Not long after, a Palestinian man came up to me and took the blindfold and plastic cable ties off. I was in the village of al-Hijrah, which is close to Beit Hagai. He called my family and they came to pick me up. Suhayb was arrested.

Muhammad Isma’il al-Faqih, 40, lives in Dura with his wife and their six children. In a testimony he gave B’Tselem on 13 July 2016, he described the fear he felt for having the same name as the suspect. He related the late-night military raid of his home:

I live with my wife and our six young children – the eldest is 15 – in a building that has five stories and twenty apartments. I am from the al-Faqih family, which is one of the largest families in Dura. There are dozens of people in the town named Muhammad al-Faqih, like the wanted man. The military raids on the town started on Sunday night, 3 July 2016. After that I had a hard time falling asleep every night, because I was sure the military would come to our house any minute, even though I’m not directly related to the wanted man. The lack of sleep made me late for work in the mornings.

On 12 July 2016, at 3:00 A.M., they came. I was still up, and I saw, from our balcony, dozens of soldiers coming toward our house. First they went into two homes next to ours. Then I heard loud knocking. I ran and opened the door, and four or five soldiers jumped me. One of them tied my hands behind my back with plastic cable ties. My wife and the children woke up and the soldiers took them into one of the rooms.

A plainclothes intelligence officer started interrogating me. He knew I wasn’t the Muhammad al-Faqih they were looking for, but he asked me when I had last seen him. I told him I have nothing to do with him and that I never see him. He said I was lying and threatened to come back every night. He left me with two soldiers, still with my hands tied. The rest of them went on to other apartments in the building. It was only at around 6:30 A.M., when they left, that my wife and children came out of the room and cut the cable ties off my hands. I later found out that the military raided other homes in the neighborhood that night, including my father’s and my two brothers’. They left them summons to come to the Gush Etzion police station, and we later found out that one of my brothers had his permit to enter Israel revoked.

Khaled Ahmad al-Faqih, 50, related the soldiers’ violent conduct when they entered his home, where he lives with his wife and six children, in a testimony given on 13 July 2016:

My wife is the sister of Muhammad Jbarah Ahmad al-Faqih, whom the military is accusing of the shooting attack. Today, 13 July 2016, at about 2:00 A.M., I was woken by voices coming from the outside gate of the house. I went down to the entrance and opened the door, but quickly started back inside when I saw soldiers trying to open the gate. A huge military dog ran up and attacked me. It knocked me down to the ground, but a soldier got it off me. The dog went into the house and up the stairs to the top floor, where we live. I heard my daughter Raghdah, 23, screaming in fear. The soldiers took me to the top floor and put me in the kitchen with my four younger children. My wife, my daughter Raghdah, and my 21-year-old son Mu'az, were taken into separate rooms. The soldiers asked me a lot of questions about our ties with Muhammad. The interrogator said he wouldn’t do anything to me, but that they were going to arrest my wife and my son Mu’az. Then I saw them take both my wife and Mu’az away with their hands tied.

Throughout July, soldiers performed dozens of nightly raids on Dura homes. The soldiers would wake up the entire household, including young children, keep most family members in one room and take some for questioning about the shooting attack in other rooms. The soldiers then left the homes, leaving behind terrified children and startled adults who felt completely helpless as they were unable to protect their children and themselves. The testimonies indicate that the soldiers and the ISA (Israel Security Agency) agents who accompanied them did not have substantiated information to indicate Muhammad Jbarah Ahmad al-Faqih, the suspected assailant, was present in any of the homes they raided.

Whatever the reasons for the Dura raids, the result was a punitive measure against the town’s residents in general and against relatives of the suspect, in particular. The authorities would never consider operating in this manner inside Israel, but in occupied Dura, such action is taken without a moment’s thought. Using the blanket excuse of security, the military and the ISA violated the rights of people whose only sin is living in the same community as the suspect, or being related to him. Such wholesale harm to all town residents is not and cannot be justified. 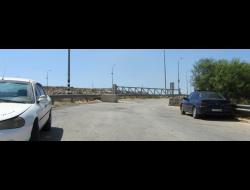