In a statement issued by the IDF Spokesman immediately following the first attack, on the a-Shuruk Building, the Israeli military stated that the attack had been directed at “antennas used by Hamas for military operations against the State of Israel in the northern Gaza Strip.” In a later statement, the IDF Spokesman clarified that both attacks were directed against the communications infrastructure of Hamas, which it claims Hamas uses to communicate operational instructions and disseminate propaganda.

B’Tselem's investigation indicates that several Al-Quds TV employees were present in their offices in Shawwa-Husari Building at the time of the attack, as they were under the assumption that the Israeli military would not bomb it. A missile fired from an Israeli aircraft went through the roof of the building and hit their offices. At least six of the employees were injured, two of them seriously. The injured were taken to the ninth floor, where they awaited ambulances, as other employees descended to the building’s ground floor. About a quarter of an hour after the first explosion, as the injured were being loaded on ambulances, the roof of the building was struck a second time. In this attack, a photographer who had gone to the roof to document the damage caused in the first airstrike was injured

B’Tselem has gathered testimony from employees of a production company located on the ninth, 13th and 14th floors of the a-Shuruk Building. They report that after the attack on the Shawwa- Husari Building, they removed some of their equipment from their building’s top floors, out of concern that the Israeli army would strike that building as well, because of the location of Al-Aqsa TV’s offices on its 15th floor. The employees descended to the ninth floor, but after several hours, returned to their offices on the 14th floor. At about 7 am, several missiles struck the offices of Al-Aqsa Television on the 15th floor, and broke through to the offices of the production company on the 14th floor as well, causing extensive damage. Two journalists standing in the entrance to the a-Shuruk Building were injured by falling debris. Other offices in the building were damaged by the missiles’ blast.

B’Tselem is not in a position to determine whether there is any basis for the IDF Spokesman’s claim regarding the military’s justification for these attacks., However, international humanitarian law is very clear on the subject: Neither reporters nor any other civilians may be intentionally targeted, and every feasible precaution must be taken to protect them from the impact of hostilities. Additionally, the media – including those belonging directly to the parties to the conflict – are not legitimate military targets, even if they are used to disseminate propaganda. Where there exists any doubt as to whether or not a target is military or civilian – that target is to be presumed to be civilian. 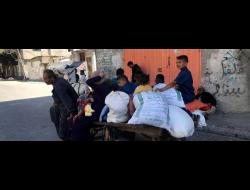 Killing blockaded civilians and destroying infrastructure on a massive scale: Israel is committing war crimes in the Gaza Strip