On Monday, 22 February 2021, at around 9:00 AM, Civil Administration personnel came with a military escort to the community of Khirbet Humsah al-Foqa in the northern Jordan Valley, where Israel has destroyed structures five times in the past few months, most recently on Feb. 16 2020. The forces dismantled and confiscated 12 tents that housed families numbering a total of 74 people, including 41 minors, as well as four tents used as livestock pens. The forces also destroyed six livestock enclosures and confiscated four water tank trailers and an additional four plastic water tanks. The forces also confiscated four unbuilt tents, two of which were set to be used for housing and two for livestock.

The tents and other items were donated to families in the community by the ICRC, the Consortium and the Ministry against the Fence and Settlements in the Palestinian Authority last week. 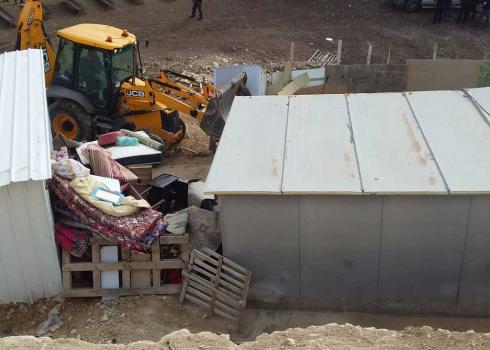 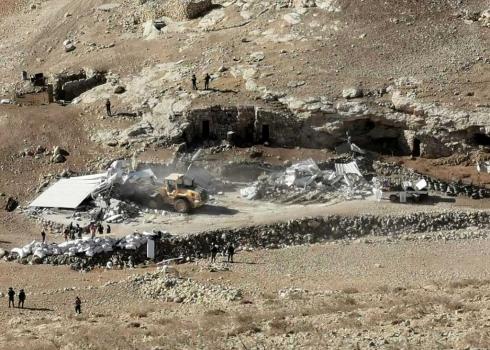 Today, Thursday, 5 Dec. 2020, at around 8:30 A.M., Civil Administration personnel arrived with Border Police officers, and a bulldozer to the community of Maghayir al-’Abid in the Msafar Yatta area in the South Hebron Hills. The forces demolished three cinder-block residential structures with tin roofs where three families numbering a total of 12 members, including five children, had lived. The structures were donated by the European Union. 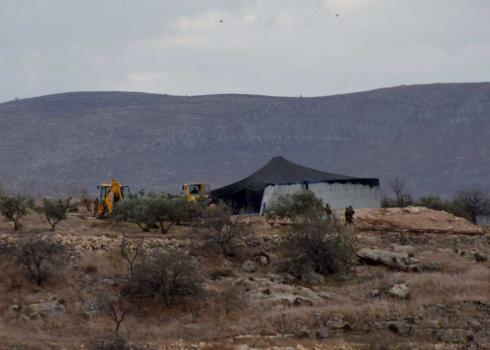 On Tuesday, 3 December 2019, at around 7:00 A.M., Civil Administration personnel came with a digger, a bulldozer and a military-jeep escort to the Palestinian community of Khirbet ‘Einun, east of the city of Tubas in the northern Jordan Valley. The forces demolished two concrete and metal water cisterns built some two months ago for farming needs. One was owned by a resident of Tubas and the other by the Tubas agricultural association.
The demolition was carried out pursuant to Military Order 1797, which was issued in April 2018, and eliminated the façade of judicial review 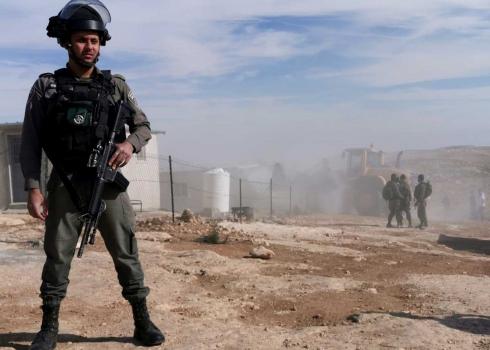 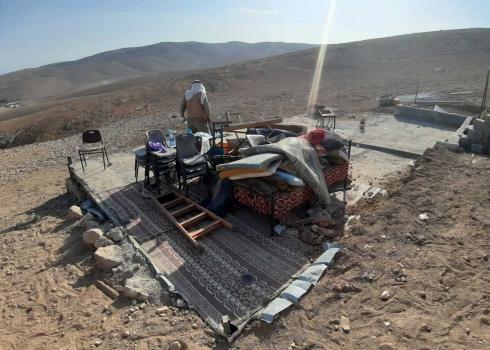 On Monday, 11 Nov. 2019, at around 6:00 A.M., Civil Administration personnel arrived with dozens of Border Police officers and a crane truck at the community of al-Muntar, which is located in al-Quds District, southeast of the town al-'Eizariyah. The forces dismantled and two shacks used as residences by two families numbering a total of seven members, including three children, and a water container that belongs to one of the families. 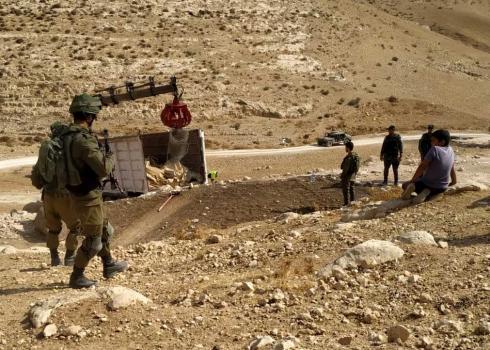 On Wednesday, 6 November 2019, at around 10:00 A.M., Civil Administration personnel arrived with soldiers, Border Police officers and a crane truck to Khirbet Khilet a-Dabe’ in the Msafar Yatta area in the South Hebron Hills. The forces dismantled and confiscated three tents used as residences by three families numbering a total of 21 members, including 11 children. The three tents were donated by the ICRC after the Civil Administration demolished the homes of two of the families on 11 September 2019, leaving nine people, including five children, homeless. At around 12:30 they continued northeast, to the Maghayir al-'Abid community in Masafer Yatta and demolished a tent that served as a livestock pen. 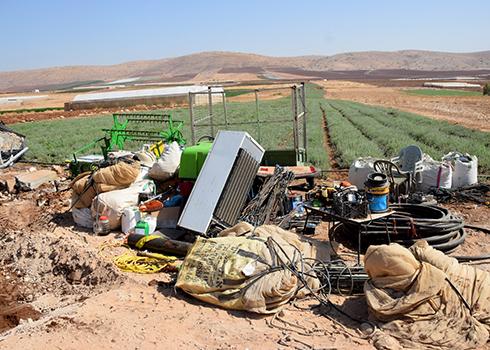 Yesterday, 18 September 2019, at around 8:00 P.M., Civil Administration personnel arrived with military jeeps and a bulldozer at the village of Khirbet ‘Atuf in the northern Jordan Valley. The forces demolished a shack and a caravan belonging to a resident of al-Judeidah, in Jenin District, used for farming. Later, at around 12:00 noon, the forces arrived at Khirbet a-Ras al-Ahmar and confiscated a tractor belonging to a resident of Tubas. 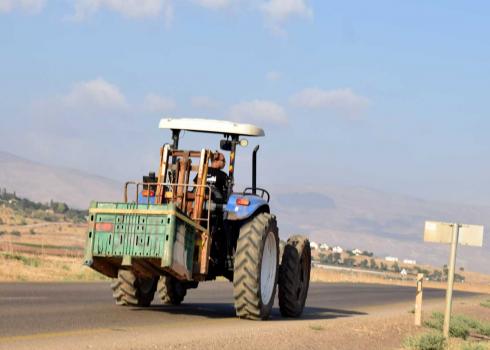 This morning, Tuesday 6 August 2019, at around 7:00 A.M., Civil Administration personnel arrived at Khirbet a-Ras al-Ahmar in the northern Jordan Valley with a military escort. The forces confiscated a private car and tractor belonging to a resident of Tubas who owns farmland in the area. They also confiscated a truck that was unloading feeding troughs for livestock belonging to the local farmers. The Civil Administration personnel ordered the owners of the car and truck to drive their vehicles to the settlement of Beka’ot, while one of the personnel drove the tractor to the settlement.
Direct link to this update.
30 Jul 2019 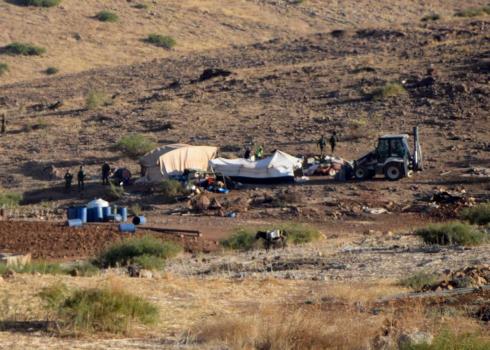 Civil Administration demolish and confiscate tents and livestock pens in Khirbet a-Ras al-Ahmar and Khirbet Wadi al-Faw, and a truck in the village of Bardala

This morning, Tuesday 30 July 2019, at around 6:00 A.M., Civil Administration personnel arrived at Khirbet a-Ras al-Ahmar in the northern Jordan Valley with a military escort, a bulldozer, and a truck with a crane. The forces dismantled and confiscated for the second time three tents that were used as a home for a family of nine, including four children. One of the tents was donated by the Red Cross after another tent was demolished. The forces also confiscated a solar panel belonging to the same family. The forces dismantled and confiscated three tents used by another resident as livestock pens; these tents were also donated by a humanitarian organization after the previous demolition. Two feeding troughs were also confiscated.
Later, at around 1:00 P.M., Civil Administration personnel accompanied by a bulldozer arrived at Khirbet Wadi al-Faw, to the south of Khirbet ‘Ein al-Hilweh in the northern Jordan Valley. The forces demolished a tent used for seasonal residency by a family of eight, including three children, as well as a livestock pen owned by the family.

In a separate incident yesterday, Monday 29 July 2019, at around 1:00 P.M. soldiers accompanied by police officers and officials from the Mekorot water company, equipped with a tow-truck, arrived in the village of Bardala in the northern Jordan Valley. The forces confiscated a truck fitted with excavation equipment after several residents of the village attempted to dig a water cistern on their farmland.