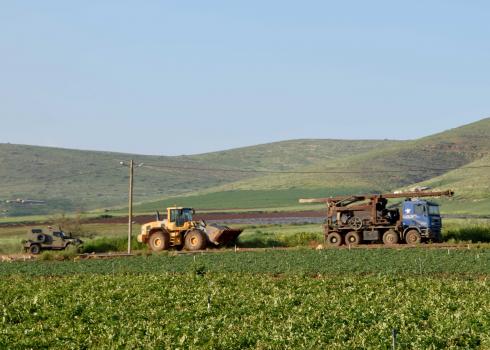 Yesterday, Wednesday, 27 March 2019, at around 3:00 P.M., Civil Administration personnel came with a bulldozer and a military-jeep escort to the Palestinian community of Khirbet a-Ras al-Ahmar in the northern Jordan Valley. They handed over a stop-work order for a rainwater cistern that a Tubas resident had recently begun to dig on farmland he owns in the area. According to the order, the work could not be allowed to continue due to deep drilling. The force also confiscated a truck fitted with a digger that was being used to dig the cistern, belonging to a resident Deir Abu Da’if, a village in the Jenin area. 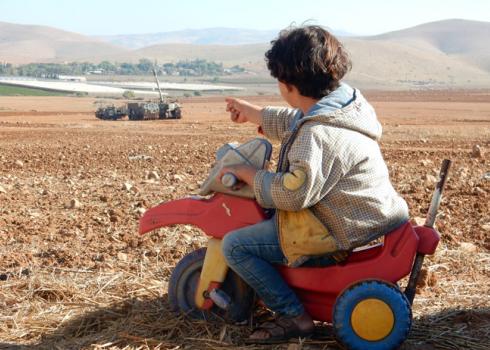 On Thursday, 19 November 2015, 13 families from Khirbet Humsah in the northern Jordan Valley were forced to temporarily evacuate for the purpose of allowing the military to hold exercises in the part of the village close to their homes. The families – a total of 86 people, including 48 minors – had to leave their homes at 6:00 A.M. and stay away for six hours. It was the sixth time this month that these families have been forced to leave their homes. On three of these occasions, the Civil Administration (CA) did not allow them to return until midnight. The orders the residents were served about a week ago by CA officials stated they would be required to leave their homes on two more occasions before the end of November. The CA has relocated residents of this community 17 different times since the beginning of 2015 – on the grounds that the area is needed for military training. 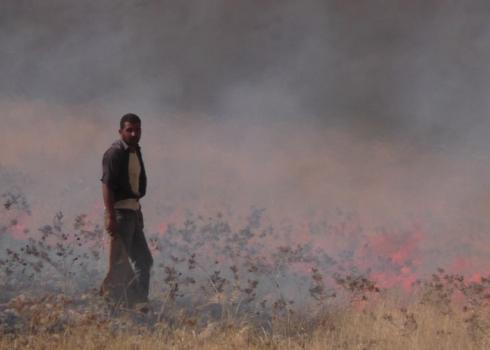 On 2 Nov. 2015, the Civil Administration made 13 Palestinian families from Kh. Humsah in the northern Jordan Valley leave their homes due to military training nearby. A total of 86 people, including 48 minors, were told to vacate their homes from 6:30 A.M. to midnight. All 13 families live in the northern part of Kh. Humsah. The families took food and water and went with their flocks to areas far distant from their homes. They were informed that they would have to leave their homes three more times in the near future. This follows 11 previous instances of temporary displacement in 2015 because the military chose to train near their homes. 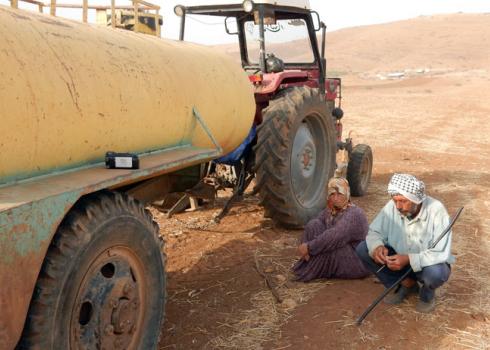 On 12-13 Oct. 2015, the military forced ten Palestinian families from Kh. a-Ras al-Ahmar to vacate their homes for three hours each day so troops could train nearby. Pursuant to orders served on 8 Oct., the families were made to leave the area with their flocks for the duration of the training. These repeated short-term displacements cause unreasonable disruption to the lives of communities in the Jordan Valley. In some cases, residents have no alternative accommodation and must wait it out in the open, trying to find shelter, food and water in the harsh weather. 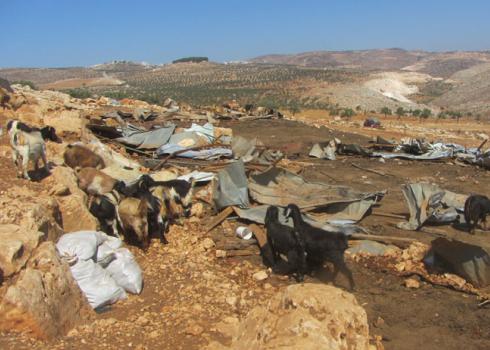 On Thursday, 3 September 2015, the Civil Administration demolished tents and shacks belonging to three families of the Ka’abneh tribe living in one of the Bedouin communities east of the village a-Taybah, Ramallah District, near the settlement of Kokhav Hashachar. Two families – a total of ten people, including six minors – lost two residential structures and one livestock pen to demolition by authorities. CA and military personnel also demolished four livestock structures belonging to a third family. Twenty people live in this compound on private lands they rent from a resident of a-Taybah. The residents said that while the demolitions were underway, CA representatives told them that they plan to demolish other residential structures there as well.

This action comes on the heels of an unusually large-scale demolition campaign in August, in which Israeli authorities demolished the homes of 228 individuals, including 124 minors, in Area C. The demolitions are part of efforts by the CA and the military to force Palestinian communities out of Area C. This government policy, which has been systematically implemented for years, constitutes the forcible transfer of protected persons inside an occupied territory, be it directly – through the demolition of Palestinians’ homes – or indirectly, by creating an intolerable reality. 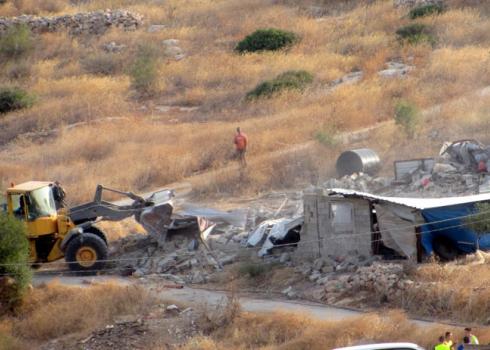 In August 228 people - including 124 minors – lost their homes in a demolition spree in the West Bank by Israeli authorities. Most demolitions were carried out in small shepherding communities which face the constant threat of expulsion from Area C. Under the guise of enforcing construction laws, Israel pursues a policy to minimize Palestinian presence in Area C by making life there unbearable. This policy, systematically implemented for years, constitutes the forcible transfer of protected persons inside an occupied territory, be it directly – through the demolition of homes – or indirectly, by creating an intolerable reality. 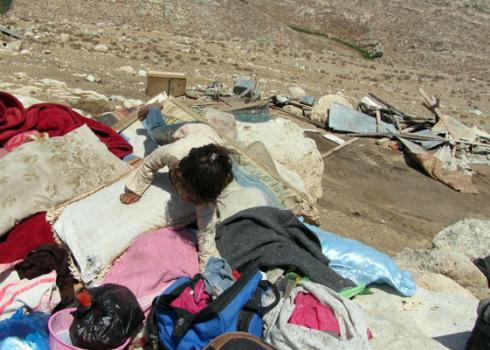 A girl looking through her family possesions in the Palestinian community of al-Khdeirat this morning. Photo: 'Amer 'Aruri, B'Tselem

The data we released regarding the demolition that took place on 31.8.2015 at the Al-Khdeirat Bedouin community contained numerous essential errors. Following is the correct data : The Civil Administration and the military demolished 15 structures, ten of them were residential, and five were used for livestock, not twenty five, as we originally said. Click to view full data. 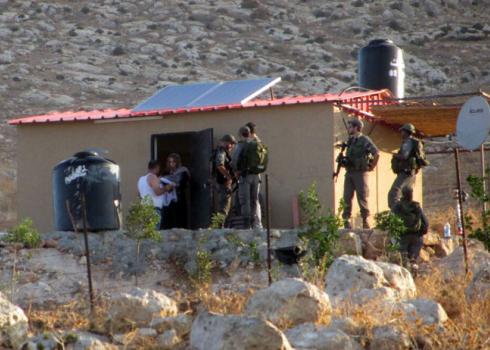 The Daraghmeh family home in Khirbet Einun this morning, before and after demolition. Photo: 'Aref Daraghmeh, B'Tselem

Today, 20 Aug. 2015, the Israeli authorities left 19 persons, including 10 minors, in conditions of extreme heat without any solution. This is the third time this week the authorities have demolished homes and income generating structures in area C. The wave of demolitions left dozens of people homeless in the extreme August heat. Since 5 Aug. 2015, the Civil Administration has demolished 34 residential buildings and 31 other structures in Palestinian communities in the Jordan Valley, in the vicinity of Ma’ale Adumim, and in the southern Hebron hills. A total of 167 people have lost their homes in these actions, including 101 minors. 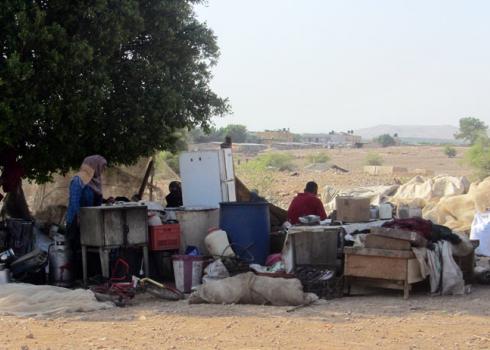 40 Degrees in the Shade: Civil Administration Destroys Homes of 48 People in Jordan Valley, including 31 Minors

This morning (18 Aug.) the Civil Administration demolished 17 home and 7 structures for livestock in the village of Fasayil in the Jordan Valley, leaving 48 people, 31 of them minors homeless. Israel prevents Palestinians in the community from establishing permanent homes and connecting them to water and electricity infrastructures, thereby leaving them exposed to harsh weather conditions. Since 5 Aug. 2015, the Civil Administration has demolished 31 residential buildings and 26 other structures in Palestinian communities in area C. A total of 167 people have lost their homes in these actions, including 101 minors. 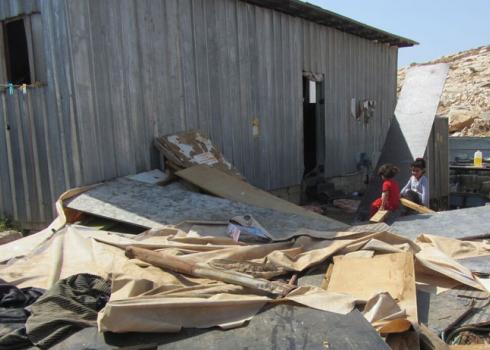 This morning, around 6am, civil Administration and army forces demolished the homes of four families numbering 32 people, of them 21 minorsat the a-Sa'idi community, near a-Za'ayem. The forces then moved to the abu-Falah community, in the Khan al-Ahmar area, and demolished a residential shack housing two people and a structure used to house guests. Later the authorities demolished 12 structures in the adjacent Bir al-Maksub and Wadi Shneisel communities, nine of them residential homes. Authorities leave the residents and herds with no shelter in harsh weather conditions. 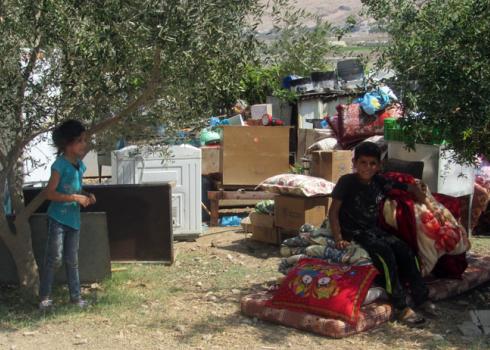 Children from the Id'eis family whose home was demolished in al-'Ajaj. Photo by 'Aref Daraghmeh, B'tselem, 11 Aug. '15

This morning, 11 August 2015, representatives of the Civil Administration (CA) and the military came to the Palestinian community of Khirbet Humsah, which lies about two kilometers from the Hamra Checkpoint in the northern Jordan Valley, in the West Bank. The forces demolished a structure under construction that was intended to house a family of four who live in a tent nearby. They also demolished two livestock pens belonging to another family in the community. Since the beginning of 2015, residents of this community have been made to evacuate their homes 11 times due to military training in the area, and nearby fields where the residents graze their flocks have been burned down. The forces then continued to the community of al-‘Ajaj (also known as Id’eis), which lies between the Palestinian village of al-Jiftlik and the settlement of Masu’a. There, they demolished two homes and two livestock pens. The families now remaining homeless number 12 people, half of them minors. In May 2014, the CA already demolished about half of the homes in the community. The forces then continued to the village of a-Zubeidat, where they demolished a structure for storing livestock fodder that lies in the part of the village defined as Area C.