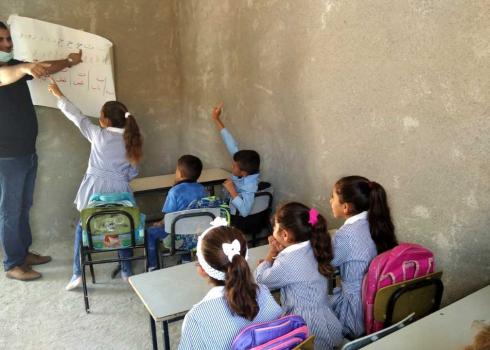 The community's children during class before the confiscation. Photo by Photo Ra'id Mukdi, 9 Sept. 2020

On 10 Sept 2020, four days after the beginning of the school year, in the early morning hours before students arrived, Civil Administration personnel came with a military and Border Police escort and a crane truck to the Palestinian community of Ras al-Tin, east of Ramallah. The forces confiscated tin panels from the school’s roof, 30 chairs and 12 classroom tables.

The students were forced to study under the scorching sun as they sat on the ground. 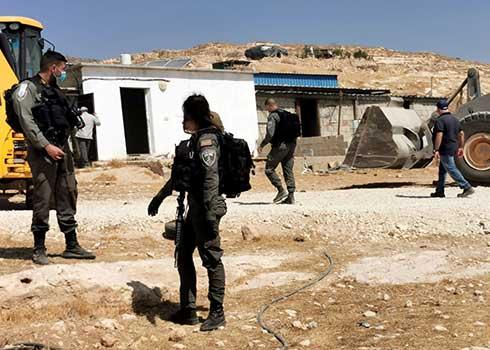 On 2 Sept 2020, around 8:30 A.M., Civil Administration officials came with a Border Police escort, a bulldozer and a digger to the area of Wadi al-A'war by the community of Birin, which lies northeast of the town of Yatta. The forces demolished a room belonging to a resident of Hebron that farmers from the community use.


The forces continued south to the village of Zif, where they confiscated a gas pump and a canopy tent.

From there, they went south to Khirbet Jenbah, a community in Masafer Yatta included within 'Firing Zone 918' in the South Hebron Hills. They demolished two homes used by two families in the community – 12 people, eight of them children – and a livestock pen. The forces also destroyed four solar panels and electrical equipment, leaving the family with no power source.

On Monday morning, 31 August 2020, at around 7:00 A.M., Civil Administration personnel arrived with a military jeep escort and a crane truck at the Palestinian community of Ras a-Tin, which lies to the east of the village of Kafr Malek,  east of Ramallah. The forces confiscated two cinderblock pallets and other materials donated by a humanitarian aid organization to build a local school. The school was meant to serve 50 children from the community and others from the neighboring community of Khirbet ‘Ein al-Rashash.

The community of 280 – made up of 35 families, including 140 minors – is not hooked up to a water network or power grids. Only 12 families have electricity, thanks to solar panels they either purchased or received from Palestinian aid organizations. Residents buy water in containers from nearby villages. About 50 of the children study in the village of al-Mughayir and have to travel one to three kilometers on dirt paths, on ATVs or animals, to get there.