On Wednesday, 25 August 2021, at around 8:00 A.M., Civil Administration personnel came with a military and Border Police escort and a bulldozer to the southern entrance to the city of Hebron and demolished a garage. From there, the forces continued to Khalet al-Furn southeast of Hebron, where they demolished agricultural terraces and uprooted some of the fruit trees on a plot of about 10 dunams. The forces then continued to Za’atut south of the village of al-Buweib, where they demolished a mosque under construction. 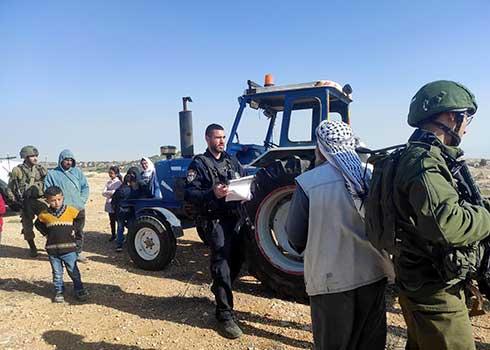 On Sunday, 5 December 2021, on the first day of military training in the northern Jordan Valley, the Civil Administration confiscated a tractor used by a resident of ‘Aqaba to perform agricultural work in the area.

On Monday, 14 December 2021, at 10:00 A.M., Civil Administration personnel arrived with a military and Border Police escort and equipped with two bulldozers to the land of the community of Khalet al-Furn in the South Hebron Hills. The forces raked agricultural land in a 4-dunam area, and demolished a cistern owned by a family from East Jerusalem by the power of Military Order 1797.

On Wednesday, 15 December 2021, Mahmoud Hamamdeh, a farmer from Khirbet al-Mufaqarah, plowed his plot of land in the Khirbet a-Rakeez area about a kilometer east of which the settlement of Avigail was established. A settler who noticed the work summoned the Civil Administration, who came to the scene accompanied by a military jeep and confiscated the tractor and a digger on the pretext that it was used for work on state land.

On Thursday, 16 December 2021, farmer Sa’id ‘Awad from the community of Um Lasafa plowed his land near the community of She’b al-Batem in the South Hebron Hills using a tractor and a digger. The work was coordinated with the Civil Administration (C.A.), and one of its representatives was present on the ground along with soldiers who accompanied him. At around 11:00 A.M., About six settlers came to the land. The settlers spoke with the representative of the C.A., and after a few minutes, the latter forbade the farmer to plow all his lands and ordered him to settle for part of it. The farmer moved to a nearby plow he owns, where the military does not require him to coordinate his work, and began plowing it. However, the C.A. representative and the soldiers then confiscated the tractor and the plow he used on the pretext that it was state land.

Confiscations and demolitions in the South Hebron Hills

On Wednesday morning, 10 February 2021, Civil Administration personnel came with a military and Border Police escort to Khirbet a-Tawamin in the South Hebron Hills and confiscated an outhouse. They then continued to the western part of Khirbet Susiya, where they confiscated a tent that was home to a family of six, including four minors. The forces went on to Khirbet a-Rakeez, where they confiscated an outhouse and three tents, two of which were being used to host activists following the grave injury of community resident Harun Abu ‘Aram (24) at the hands of Israeli security forces on 1 January 2021. The erection of the third tent was underway. From there, the forces continued to the community of Um al-Kheir and confiscated two gas pumps. Finally, they reached the community of Khallet al-Furn, where they dismantled and confiscated a shack under construction.

On Wednesday, 3 January 2021, at around 4:00 P.M, Civil Administration personnel arrived with a military and Border Police escort, and two diggers at the community of Khalet al-Furn, east of the village Bani Na’im in Hebron District. The forces demolished a concrete home under construction owned by a Hebron resident.


The next day, Thursday, 4 January 2021, at around 7:30 A.M., Civil Administration personnel arrived with a Border Police escort, a bulldozer and a digger at the community of Khallet Taha near the town of Deir Samit, east of Hebron. The forces demolished a concrete home that was home to a family of seven, including five children. In addition, the forces destroyed power lines and confiscated a disassembled tent and rolls of barbed wire. 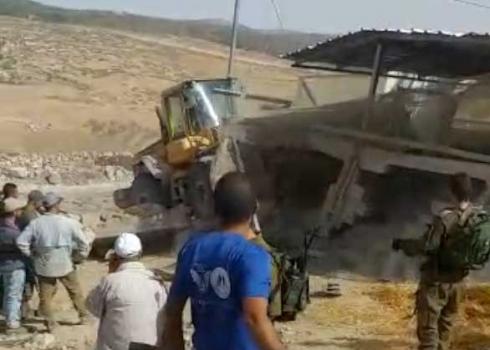 On Tuesday, 16 July 2019, at around noon, Civil Administration personnel arrived at the community of Khalet al-Furn, east of the village of Bani Na’im in east Hebron, with soldiers, Border Police officers and a bulldozer. The forces demolished a water cistern used for farming. The forces then proceeded south to Khirbet Ghuwein al-Fauqa, south of the town of a-Samu’ and demolished a shack used as a livestock pen.