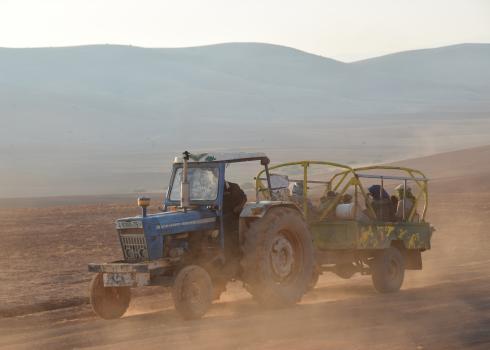 Even on 'Eid al-Fitr, residents of Kh. Humsah temporarily displaced for military training

This week, again, on Sunday, Monday and Wednesday Civil Administration officials again came with a military jeep escort to Khirbet Humsah in the northern Jordan Valley and ordered the 15 families to vacate their homes pursuant to orders handed out in the community on 8 May 2019. This is the fourth week the families have been temporarily displaced, and the orders were carried out despite the heavy heat in the area, the Ramadan fast and the celebration of 'Eid al-Fitr as of Wednesday. Some of the families left on tractors harnessed to carts or in other vehicles, and others went on foot. On Wednesday morning, when 'Eid al-Fitr began, the forces came to the community at 5:00 A.M., two hours before the time stated in the order, and forced the families to leave unprepared. At 10:30, the military notified the families that they were permitted to return home (instead of at 2:00 P.M. as stated in the order). 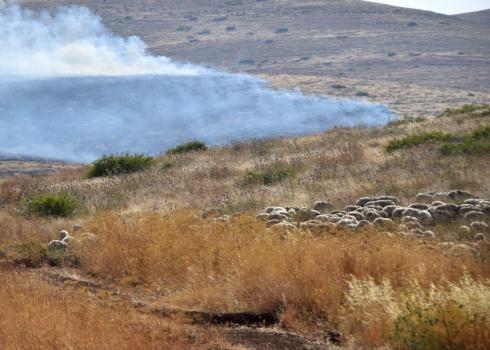 The pastureland being consumed by the flames. Photo by Aref Daraghmeh, B’Tselem, 27 May 2019

This week Israeli military continues to harass and temporarily evacuate residents of Khirbet Humsah, despite heat wave and Ramadan fast

Once again, on three days this week – Sunday, Monday and today (Wednesday, 29 May 2019) – Israeli Civil Administration personnel came with a military jeep escort to the Palestinian community of Khirbet Humsah in the northern Jordan Valley. They ordered fifteen families to vacate their homes in accordance with the orders they had been served on 8 May 2019. This is the third week in a row of the temporary displacements, which continue despite the oppressive heat, with temperatures ranging from a high of 36 degrees centigrade (96.8 °F) on Sunday to 42 degrees (107.6 °F) today, and despite the fast of Ramadan. This morning, the troops arrived at Khirbet Humsah at about 5:30 A.M., an hour and a half before the time mandated in the order and compelled the families to vacate their homes, even though they had not yet completed their preparations. The military informed the families that they may return home today at 11:00 A.M., instead of at 2:00 P.M., as written the order.

As a result of the military’s training in the area, a fire started on Monday on lands owned by Tubas residents, east of the region of Khirbet Samrah. The blaze destroyed hundreds of dunams [1 dunam = 1,000 square meters] of pastureland. 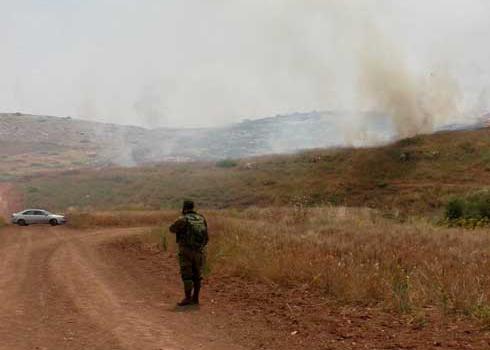 At around 7:00 o’clock this morning (Wednesday, 15 May 2019) Israeli Civil Administration personnel, accompanied by a military jeep escort, came for the third time this week to the Palestinian community of Khirbet Humsah (al-Foqa) in the northern Jordan Valley. Once again, they ordered fifteen families to temporarily evacuate their homes, this time from 7:00 A.M. until 2:00 P.M. The families complied, some leaving by tractor-towed carts and other vehicles, others on foot.

Yesterday (Tuesday, 14 May 2019), two fires broke out on nearby pastureland – one in the morning and one in the evening – as a result of the military training there. The blazes destroyed dozens of dunams [1 dunam = 1 square kilometer] of pastureland that the community uses for grazing its livestock.

Since the beginning of May, four other fires have already erupted as a result of the nearly daily military training in the area. These blazes have destroyed hundreds of dunams of pastureland and dozens of dunams of cultivated farmland. 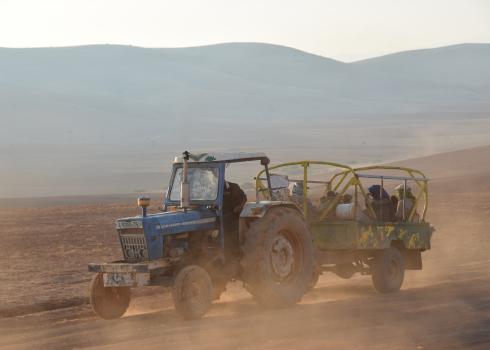 The Jordan Valley: Israeli Civil Administration serves orders to 15 Palestinian families to temporarily evacuate their homes 12 times in May and June

On the morning of Tuesday, 7 May 2019, Israeli Civil Administration personnel and soldiers arrived at the Palestinian community of Khirbet Humsah (al-Foqa) in the northern Jordan Valley. They served temporary evacuation orders to fifteen of the community’s families, totaling 98 persons, including 56 children. The families received orders to evacuate their homes on 12 separate occasions in May and June. Military training near their homes was cited as pretext. As of 12 May 2019, in the midst of the Muslim month of Ramadan, the families were ordered to vacate their homes every Sunday from 2:00 P.M. until 10:00 A.M. the next morning (Monday); then again from 4:00 P.M. on Monday, until the next morning (Tuesday); and finally, to vacate their homes on Wednesdays from 7:00 A.M. until 2:00 P.M. Some of the families have nowhere else to stay, and will be forced to spend the night out in the open. Most of the families have already undergone temporary displacement last year, including some families who were forced to leave during the month of Ramadan.

Yesterday (Sunday, 12 May 2019), at around 2 P.M., CA personnel came with a military jeep as escort to Khirbet Humsah and ordered the fifteen families to leave their homes from 2:00 P.M. until 10:00 A.M. the next morning. The families left, some by tractor-towed carts and some on foot. The troops detained for five hours journalists and a field researcher of the al-Haq NGO who were documenting the evacuation. They were detained on the grounds of supposedly being in a closed military zone. The next evacuation is slated for today, Monday, to being at 4:00 P.M. this afternoon.

On Tuesday, 4 September 2018, at about 7:00 A.M., Civil Administration personnel and laborers, accompanied by soldiers, arrived in Humsah a-Tahta in the northern Jordan Valley. They dismantled and confiscated a caravan belonging to the Bisharat family – the parents Khadijeh and Mahmoud and their three daughters. The caravan was donated to the family by the European Union after the Civil Administration demolished the family’s home in 2015. In 2017, the family was given a demolition order against the caravan, and fearing that it would be destroyed, they took it down it and moved in with Mahmoud’s parents. In August 2018, the family put up the caravan again with the help of volunteers.

Military orders all 103 residents of Khirbet Humsah to evacuate from 6:00 AM to 8:00 PM

On 21 June 2018, Civil Administration personnel, accompanied by military forces, arrived at the community of Khirbet Humsah, in the northern Jordan Valley and delivered temporary evacuation orders to all sixteen families living in a number of separate compounds in the community. Five of these families have been temporarily displaced four times over the last few months. The families were told to leave their homes on 26 June 2018, from six in the morning until eight in the evening on the pretext that the military needs to train in the area.
Video filmed by 'Aref Daraghmeh, B'Tselem 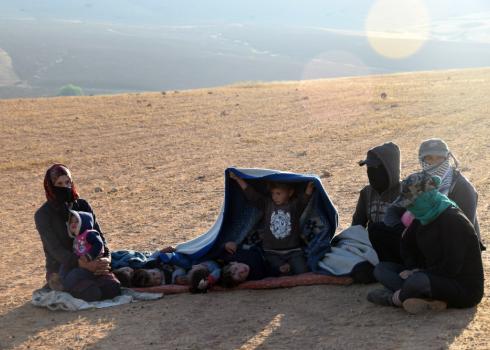 Several members of the extended al Abu al-Kabash family in the field they removed to early in the morning. Photo by ‘Aref Daraghmeh, B’Tselem, 24 April 2018

On Sunday, 22 April 2018, Civil Administration officials came to the Palestinian community of Khirbet Humsah in the northern Jordan Valley. The settlement of Beka’ot was built near this community. The officials served five families of the extended Abu al-Kabash family with evacuation orders, allegedly for the purpose of military training due to take place in the area. The families were told to vacate their homes on three dates: 24 April, 1 May and 8 May 2018, from 6:00 A.M. to 2:00 P.M. each time. The five families have 29 members in total. Nineteen are minors, including a month-old infant and a child with Down syndrome. Yesterday, 24 April 2018, soldiers and Civil Administration officials arrived at the community at 6:00 A.M. and ordered the five families to leave. The adults took their sheep - herds numbering scores of animals - and walked to an open area some 10km away from their homes, near the village of al-Hadidiya. The children were taken by car to a different site where they waited until they could return home. The families were forced to leave behind, untended, two newborn lambs as they were not yet able to go out to pasture.

Soldiers, armored vehicles and tanks have been training in several locations near Palestinian communities in the northern Jordan Valley almost every day since 5 March 2018. Daily military exercises are a living example of Israel’s policy in the Jordan Valley and in Area C overall, designed to create impossible living conditions that will drive residents of Palestinian communities to leave their homes, ostensibly by choice. 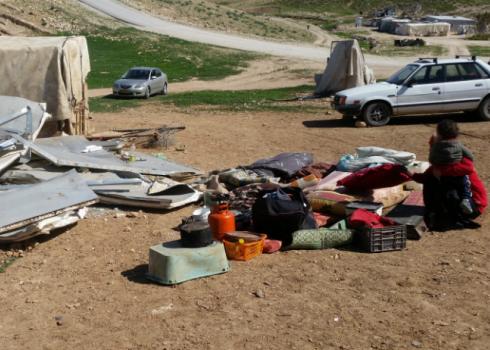 Local resident near the ruins of the trailer home the Civil Administration demolished. Photo by Hussam ‘Abed, B’Tselem, 20 Feb. 2017

This morning, 20 Feb. 2017, the Civil Administration demolished the home of an elderly woman – a trailer donated by a humanitarian aid organization – in the Palestinian community of al-Mehtiwish, which lies near Khan al-Ahmar on land Israel earmarked for expanding the Maale Adumim settlement. The CA also demolished a water pipe in the Jordan Valley which residents of Khirbet al-Hadidiyah and Khirbet Humsah had laid with the help of humanitarian organization, as Israel refuses to hook up these communities to the water grid. The pipe had been restored by residents after being demolished by the CA on 10 Jan. 2017. 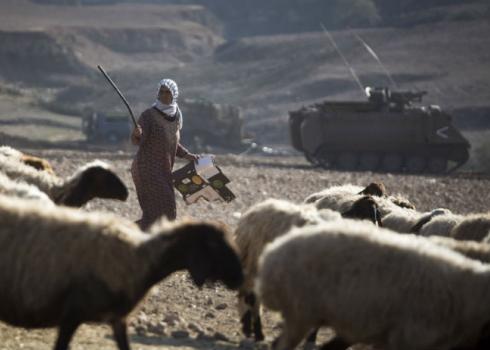 A shepherdess and armored personnel carriers in the pastureland of Jordan Valley residents. Photo by Keren Manor, Activestills, 8 Dec. 2016

Since Sept. some 220 Palestinians (incl. about 100 minors) have been forced to leave their homes in the Jordan Valley on multiple occasions to make way for military training. Families from Ibziq, Khirbet Humsah and Khirbet a-Ras al-Ahmar have had to spend hours on end, or even all night, far from home and exposed to the elements. The frequency of these displacements completely disrupts residents’ lives and jeopardizes the very existence of these communities. As an occupying power, Israel cannot use the land for routine military purposes, harm the livelihood of protected persons on this pretext, or attempt to expel the residents.