I live in a-Zawaida, in Deir al-Balah area. I am vice-principal of a school. Since the Israeli attack began, the schools have been closed.

All this time [since 27 December], my family and I have been afraid of the army's bombing. At first, we stayed in our house, thinking it was safest there. We remained even though we had electricity for only twelve hours a day and it was hard to obtain food. We were constantly tense, and waited for the beginning of the ground offensive.

Yesterday [3 January] afternoon, intensive bombing from the sea began to hit our neighborhood. We realized we were in real danger and that houses could be hit in the bombing. When it got dark and the ground assault began, it was clear that we couldn't stay in the house. We had to get out quickly. The bombing, and the Israeli tanks heading our way, made it hard to get away. The tanks began to fire directly at the houses. We tried to figure out the direction of the shooting, and went from room to room. We didn't sleep at all. We decided to stay awake all night and then flee.

At sunrise, we left the house. We went to stay with my cousin, Muhammad Abu Dahruj, who lives in the Nuseirat refugee camp, which is about ten kilometers from our house. Muhammad and his family, a total of six persons, live in a small, two-room house. We feel more secure now, because there is no army activity in the camp and nearby.

I spoke with my three brothers, Nayef, who has a seven person family, Muhammad, who has five, and Ahmad, who has eight people in his family. They, too, fled from their homes and went to live with relatives in the camp. I think most residents of our neighborhood fled. I heard that some went to stay in schools and some to stay with relatives.

The security situation is worsening and we are worried. It is impossible to know what will happen an hour from now. Today, my brother Muhammad was injured by shrapnel during an aerial bombardment. He was lightly injured in the arm and received eight stitches.

Nawaf Abu Dahruj is a vice-principal of school and a resident of a-Zawaida in Deir al-Balah district. His testimony was given to Musa Abu Hashhash by telephone on 4 Jan. '09.
/> 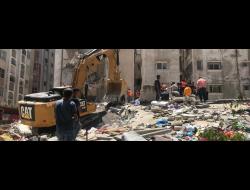