My son Ahmad, 19, was injured on 9 January 2009 by fragments of missiles that were fired by an unmanned aerial vehicle and landed next to our house, east of Khan Yunis, in New ‘Abasan. He was taken to Egypt, where he was treated for seven months. When he got back to the Strip, his doctors referred him to Germany for treatment. To do that, he had to go to the German embassy in Tel Aviv, and he couldn't get a permit to enter Israel. Rather than going to Germany, Ahmad received a referral from St. Joseph's Hospital, in Gaza, to St. Joseph's French Hospital, in Jerusalem. He was given an appointment for 23 November 2009. At first, he didn't receive an entry permit, but then, on 24 November, an official from the Palestinian liaison office called and told me that he had to go the next day to the Erez checkpoint at 11:00 A.M.  At 11:00, we went to the checkpoint. We were searched, they took our ID cards and the cooler with insulin that Ahmad needs to take and his blood sample. They took Ahmad, who was on crutches, and I haven't seen him since. Two hours after they took him, I told the soldiers that Ahmad had to undergo a blood test every two hours because his pancreas is not functioning, and that he has to take insulin, which is in the cooler that they took.

I waited another hour or so, feeling that something was not right. Nervously, I asked them where my son was and said that I can't leave him even for a short period of time. An officer came over and told me my son had been detained.  He gave me back my ID card and told me to return to Gaza. I refused, but soldiers forced me out of the checkpoint. I couldn't believe what was happening. I left without Ahmad and without our things. I went to the Palestinian liaison office at the checkpoint and told them what happened. One of the office's drivers drove me to the Red Cross offices, and I told them and Physicians Without Borders what happened.

Ahmad is injured. He is disabled and can barely walk with crutches. He has an eye injury, iron splints on his right hand, his left hand is also injured, and some of his fingers have been amputated. His pancreas is not functioning properly, which caused diabetes.

Since that day, I've been worried sick about my injured son. I am afraid that his blood-sugar level will rise, which will cause other problems, and that he will suffer in detention and not receive the treatment he needs. I don't understand why they detained him. He is a simple person and has no connection to any organization, and he has trouble functioning.

Attorney Muhammad Jabarin called me today and said that he saw Ahmad for a short time. His detention was extended until 10 December. He is not allowed to meet a lawyer until 6 December.

Note: 'Asfur's attorney informed B'Tselem in late December 2009 that his client was still in prison and his medical condition was stable, but he was not receiving the rehabilitation for which he requested to enter Israel. After he was detained for 24 days, an indictment was filed against him for twice observing Israeli troop movements in Gaza on' behalf of Islamic Jihad, and for concealing weapons in his house for several hours on two other occasions.

Samir Muslem Muhamad 'Asfur, 52, is a father of 13 and a resident of New 'Abasan, in the southern Gaza Strip. He gave his testimony to Muhammad Sabah on 2 December 2009. 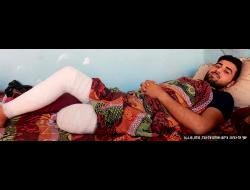