Nearly 3 years after Samir ‘Awad was killed: By end of 2015, indictments to be served on minor charge Yesterday, 8 November 2015, Israel’s High Court of Justice (HCJ) ruled that the State Attorney’s Office must file indictments against two soldiers involved in the killing of 16-year-old Palestinian Samir ‘Awad, by the end of December 2015 – almost three years after the incident took place. The HCJ also ruled that the petition filed jointly by Ahmad ‘Awad, Samir’s father, and by B’Tselem had been exhausted, unless the State Attorney’s Office updates the Court of a change in its decision. In which case, the petitioners will be able to renew their appeal to the Court. The ruling followed a notice from the State Attorney’s Office on 4 November that it had reached a final decision to prosecute the two soldiers for committing “a reckless and negligent act using a firearm”. The recommendation to prosecute had been made earlier by the Central District Attorney’s Office, and prior to that by the Military Prosecution and by the MAG – as the State Attorney’s Office reported to the HCJ almost nine months ago, on 15 March 2015. Before the final decision was reached, hearings were held for both soldiers, following which new evidence was gathered as part of an additional investigation of the incident. According to the update by the State Attorney’s Office, the investigative material gathered did not meet the threshold required by criminal law for establishing that either soldier caused ‘Awad’s death.

As B’Tselem wrote some six months ago – after the State Attorney’s Office announced its intention to prosecute the two for this minor offense – killing a wounded, fleeing youth who posed no threat by shooting him in the back cannot be considered a “reckless and negligent act”. The disparity between the grave action and the minor offense is incomprehensible and outrageous, conveying a message of disregard for the lives of Palestinians in the Occupied Territories on the part of Israeli authorities. The State Attorney’s Office, whose decision endorsed filing indictments on this minor charge, reiterated yet again the message to Israeli security forces in the Occupied Territories: even if you kill an unarmed Palestinian who poses no threat, we will do everything to cover it up and ensure impunity. On another matter, it is also not clear why it took almost three years and a petition to the HCJ for the authorities to decide to indict on such charges.

At the end of the day, the predictable outcome is this: a Palestinian teenager who was endangering no one was shot to death by soldiers. After a long legal battle, it appears that indictments are to be filed in the case, but only on a minor, ridiculous charge and after some three years of foot-dragging, which continued even after a petition to the HCJ. Although the justices were well aware of the protracted proceedings in this case, which prompted the petition to begin with, they enabled the State Attorney’s Office conduct throughout the process. This final outcome is the shared responsibility of many actors – from the commanders of the soldiers who fired, the MPIU investigators, the MAG Corps, the State Attorney’s Office and its attorneys, to the High Court justices. They all bear a joint responsibility for the message that this outcome conveys.

Background on the case:

On the morning of Tuesday, 15 January 2013, after his last examination before school’s mid-year break, 16-year-old Samir ‘Awad of the village of Budrus, went along with a few friends to the Separation Barrier south-west of Budrus, about 300 meters from the school. B’Tselem field researcher Iyad Hadad gathered testimony from several of the teenagers, one of whom watched from a distance. According to their testimonies, the boys planned to throw stones at military patrols along the fence, as teenagers in the area often do. They said that when they approached the Separation Barrier, they saw that one of its gates was open. Therefore, they thought that soldiers must be nearby and tried to find them. The Separation Barrier is made up of a primary fence and secondary rows of barbed wire around it. The barbed wire is meant to prevent access to the primary fence, but near Budrus there are several openings in the barbed wire. One boy went through a makeshift opening in the first barbed wire fence, saw nothing, and came back out. Samir ‘Awad then went through the opening alone, and continued on to the primary fence.

Military sources told the media that Israeli soldiers of the 71st Armored Corps Battalion were concealed in a nearby ambush. B’Tselem’s inquiry shows that the soldiers were on the side of the Separation Barrier facing Budrus. According to the information that B’Tselem collected, when Samir ‘Awad was between the barbed-wire fence and the main fence, four soldiers appeared on the scene and the other teenagers fled to the village. At this point, ‘Awad apparently tried to run away, but was caught between the two fences. The soldiers called for him to stop and fired in the air. Then they shot at his leg while he was trying to flee. He was wounded and fell to the ground, but when he tried to continue running, the soldiers shot him again. He was wounded by a bullet in the back and a bullet to the head. 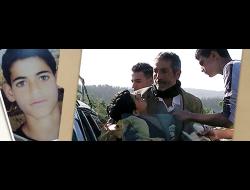